The man, the myth, the mystery. Much ado about Colby Rasmus.

Colby Rasmus recently gave a great interview reflecting on his 2014 season. He suggested some issues he had this year with hitting into the shift, batting average on balls in play, and wear and tear from playing on turf. Here we look into these components of Rasmus' play for this season and last.

Share All sharing options for: The man, the myth, the mystery. Much ado about Colby Rasmus.

When the Toronto Blue Jays acquired Colby Rasmus as part of a 6-player deal in July 2011, there was a fair amount of excitement. Alex Anthopoulos exerted his ninja GMing on the Cardinals, acquiring a young player at a premium position who would be under team control for a few more seasons. The much-ballyhooed conflict between Rasmus and Cardinals manager Tony La Russa left many suggesting that the change in scenery would do Rasmus well. In his three seasons in Toronto, Rasmus has produced 1.0, 4.8, and 0.6 fWAR (6.4 total), which is basically what he produced in St. Louis (7.1) with similar playing time. So perhaps getting a scenery change was not the critical factor. Regardless, that 4.8 fWAR in 2013 looked like he had made himself a critical part of the Blue Jays outfield for the foreseeable future. Then his 2014 season happened.

Here are statlines for the two seasons:

His performance this season and a group of ready to emerge players make it unlikely Rasmus will be back in Toronto in 2015. As his time in Toronto draws to a likely conclusion, Rasmus spoke candidly in a fantastic interview with TSN's Scott MacArthur. The interview is not your typical cliché-riddled affair. Rasmus speaks openly about his performance in Toronto, the injuries and adjustments he has worked through, and the persistent rain cloud hanging over him: his time in St. Louis. There is a lot to take away from the interview, but I wanted to key in on a few aspects to evaluate Rasmus' performance and think about his future in the league.

The Shift and Batting Average on Balls in Play

Rasmus suggests that his less than stellar performance this season has partly been a result of being shifted by opposing teams and tough luck on balls in play. Specifically, he says:

I ran into a crazy year of baseball this year as far as the shift goes and things like that. These pitchers pitched me into the shift pretty well. I believe I had my highest percentage of hard balls or line drives since I've been in the big leagues but the lowest average on balls in play. That's been tough and I don't think I've been through a stretch like that in my career to where balls that I've hit hard have been caught so much and it's been a struggle to not try to do too much up there because I've hit so many balls hard and hit into the shift or whatever.

Now it is difficult to say whether Rasmus has been shifted more this year than last, although it is a fair assumption given that defensive shifting is up league wide. That, and Rasmus' spray charts suggest he is a good candidate: 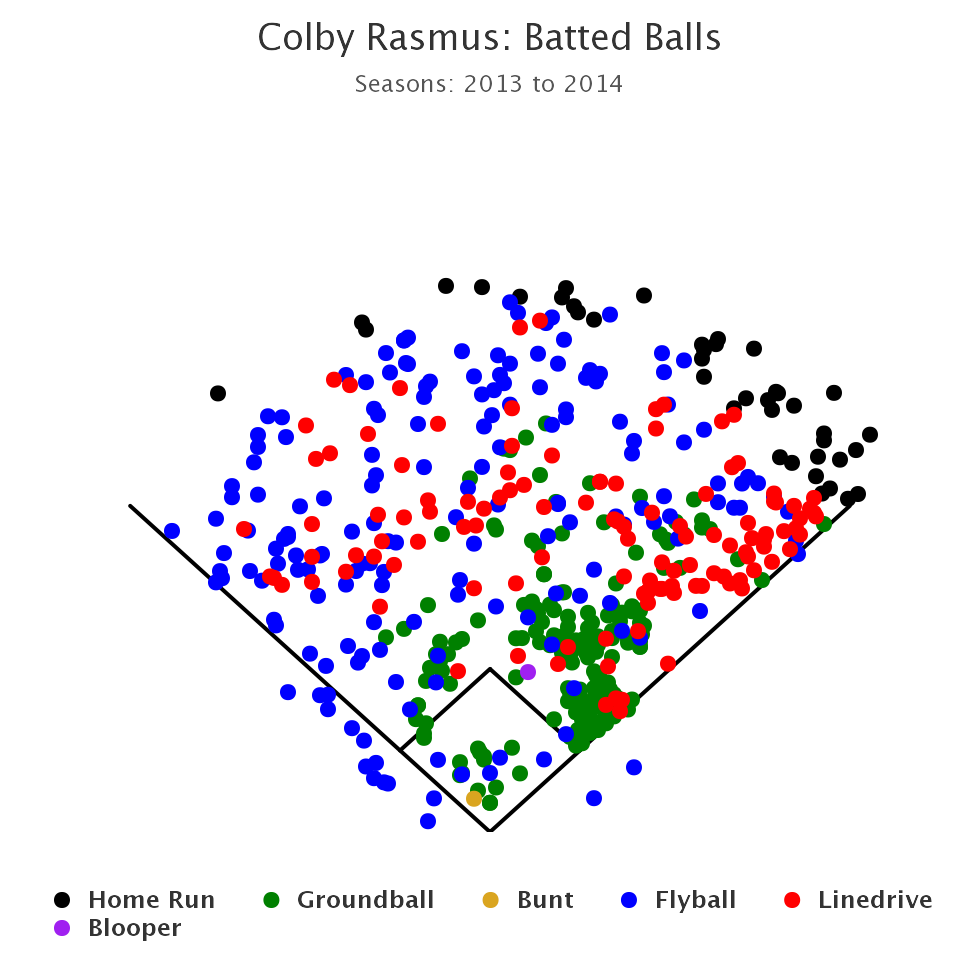 As evident from the chart, Rasmus' groundballs and linedrives are typically pulled to the right side, so shifting against him makes sense. Rasmus did hit more line drives and groundballs this season than he did in 2013, so the defensive shifting likely did impact his results this season.

How about that issue of batting average on balls in play? Well therein lies the rub. Rasmus is right that his batting average on balls in play (BABIP) is down this season, but really only when it is compared to his strong 2013 season. In 2013 his BABIP was .356, which is above the typically expected rate and well above his current career mark of .293. His .294 BABIP in 2014 is back in line with expectations and his career mark. So looking at it this way, we can ask if Rasmus has been somewhat unlucky this season, or was he somewhat lucky last season? The statistical evidence seems to support the latter rather than the former. Yet, Rasmus' comment from the interview suggests he may have become accustomed to the .356 mark and found his .294 rate (which is actually typical for him) difficult to handle. We can't know how that sort of thinking may have affected his approach in the batters box. He admits in the interview that it was a struggle to avoid trying too hard and to sort out the strike zone. He did swing more in 2014 than in 2013, both at pitches in-the-zone and outside-the-zone, which might be evidence of him pressing the issue. Ironically his swinging more likely influenced his increased strikeout rate, thereby continuing the cycle of disappointment.

All in all it looks like BABIP and K% can help explain much of the difference between Rasmus' 2013 and 2014 seasons. Unfortunately for Rasmus his 2014 rate is more in line with his projection going forward. So the perceived difficulties may remain.

Rasmus does not make any specific comments about his defense other than to say that the turf in Rogers Centre has lead to some injury issues:

I played hard and had some problems with the turf and my hips that had my hamstrings barking on me, which I haven't dealt with in the past me. The turf has taken a little toll on me in the past couple of years. I try to tell myself that I've played hard on the turf, I've dove on that turf and played a lot of games in a row. I think in the past couple of years I've played like over 50-something games in a row on the turf without an off day and I think that might have had a little something to do with it.

The effect that playing on turf has on a player's body and their longevity is an interesting question for another day. The cited injuries to his legs would impact his speed and therefore range. So we can continue the comparison of Rasmus' 2013 and 2014 seasons, now looking at his defense to see if this is the case. Doing so shows that, much like his offense, 2014 was the weaker of the two seasons. In 2014 Rasmus rated as a below average centerfielder (-9.1 UZR). The difference between 2013 and 2014 is a little over 2 wins of production. That is a significant effect. So, is Colby the solid defender of 2013 or the weak defender of 2014? As is often the case the answer probably lies somewhere in between. Digging into the numbers reveals that the difference in defensive performance really comes down to his making a few extra plays in 2013. We can see this within the Inside Edge Fielding data: 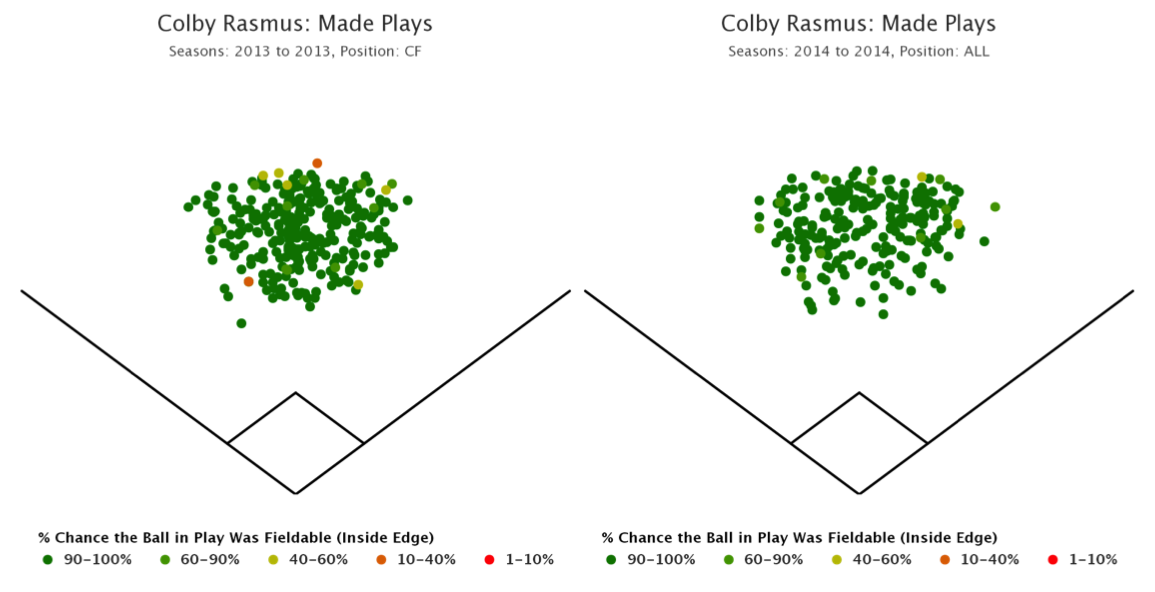 In neither season did Rasmus make a play rated as Impossible (0%) or Remote (1-10%) so they are not included in the table above. But you can see in the table (and to some extent on the spray chart) that he made 2 Unlikely, 3 extra Even and 68 extra Routine plays in 2013. These plays drive much of the difference in Rasmus' defensive contributions across seasons, and in turn affect the difference in fWAR.

This is also a fairly nice example of the variation in fielding numbers from season to season. In Rasmus' case we are looking at the performance difference from being above average to below average being driven by 72 extra plays. Now, 68 of these plays were routine and really just a function of more playing time (he had 283.1 extra innings in CF in 2013). But they still add some value. Then we have the 5 difficult plays. Making or missing those plays could simply be starting position, which is not entirely accounted for in the current metrics. It could be due to wear and tear from playing on turf for 2+ seasons. It could be distraction from thinking about making an out at the plate in the previous half inning. We really do not know. Regardless, the difference between balls falling in for a hit and being caught is considerable. For an offense analogy, imagine converting 72 outs into hits/walks for a batter. Given 600 PAs this could transform a player with a league average OBP (.314) to being the best in the league (.433). In either case, making outs on defense (and not making outs on offense) represents an addition of value over an average player, and Rasmus did that to a lesser extent in 2014.

I know that ain't a quick summary, that's a lot of stuff going on but I just chalk it up as it wasn't my year.

In the end I agree with Rasmus' comment above. As outlined here his good fortune on balls in play from 2013 went away, and he did not make as many plays on defense; as a result, his contribution to the team was not as great. Going forward he may need to live with his 2014 level of BABIP, but he has above-average power, and his defensive production could certainly bounce back. The Blue Jays are unlikely to extend Rasmus a qualifying offer this offseason and seem ready to give Anthony Gose, Kevin Pillar, and/or Dalton Pompey a chance in center field next season. So he will be playing elsewhere. Ideally he will find a place in which he can feel comfortable going about his business. On the other hand, maybe another change of scenery will again amount to very little. He seems like a complicated guy that has been through a lot to get to the major leagues - seriously, the workouts with his father sound intense - perhaps overly so - and struggles with the feeling of tremendous pressure to perform. It will be interesting to see how the market plays out for him this offseason and if he can get to a point where he is consistently contributing at a high level.