Craig Kimbrel threw over 1,400 curveballs without allowing a home run, before surrendering one to Bryce Harper. Who now owns his spot atop the homerless leaderboards?

Bryce Harper's solo home run off Craig Kimbrel September 10 broke a streak five years in the making. Brooks Baseball reports that, since Kimbrel's major league debut in 2010, he had thrown 1,407 of his famous spike curveballs* without allowing a home run. As Baseball Prospectus's Chris Mosch wrote at the time, "When a pitch gets put it play just nine percent of the time, and 73 percent of those balls in play are hit on the ground, it doesn’t often leave the yard."

How impressive is that streak? Baseball Prospectus's PITCHf/x leaderboards tell us that it was by far the largest active streak. In fact, the only pitch thrown more than 1,000 times without ever leaving the yard is the fearsome curveball of...

For those of you who aren't experts on the Rockies' middle relievers, Masset has been in the majors since 2006, but spent the last two seasons recovering from shoulder issues. Masset's Baseball-Reference page tells us that he was traded for Ken Griffey, Jr., and that his numbers are very similar to those of Rich "El Guapo" Garces.

But Masset's new claim to fame is that he has thrown 1,025 curveballs in the PITCHf/x era* without giving up a home run on one. And when we check how opposing hitters fared against those curves, we see that Masset's curveball has been nearly as difficult to hit as Kimbrel's. Brooks Baseball reports that Masset's curve, like Kimbrel's, "generates a godly amount of groundballs" and more whiffs than average; like Kimbrel's, the ROOT Sports broadcast team described Masset's curve as a "knuckle curve" during his appearance in the Sept. 15 game against the Dodgers.

Five of Masset's home runs don't have pitch types in the Brooks Baseball database; until I hear otherwise, I'll assume they weren't hit off curveballs. 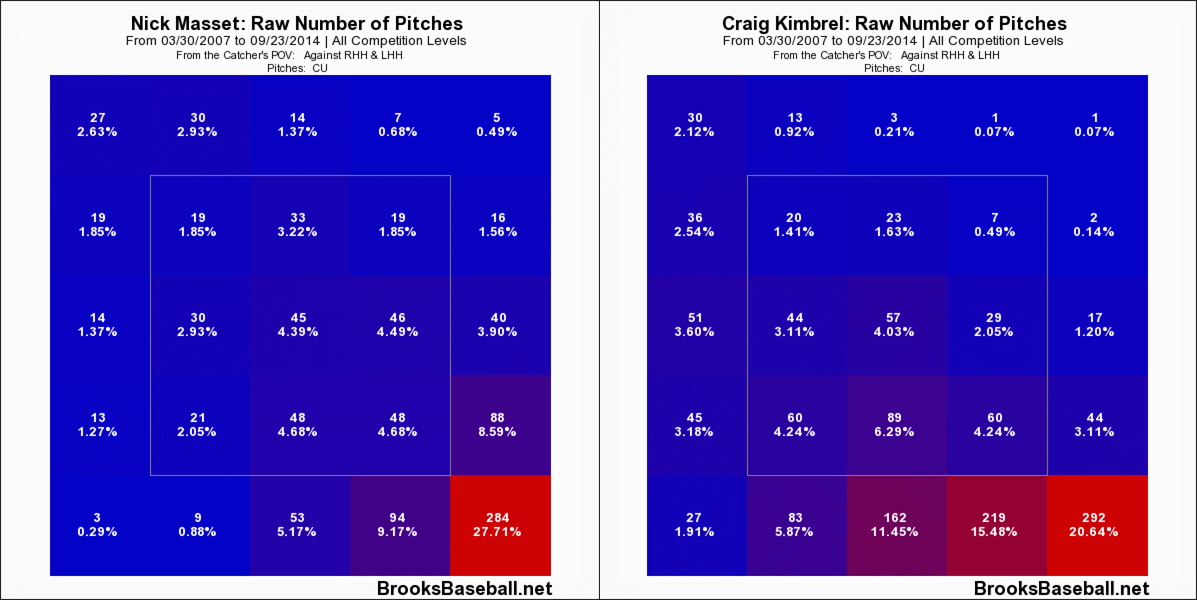 Both curves are thrown to the same location almost every time: down and away to right-handed batters, down and in to left-handed batters. And you can see the result in that table: when the ball's at your knees, it's very hard to lift into the air. The result is batter after batter pounding the ball into the ground.

"Keep the ball down" are words to live by for any major league pitcher, especially one pitching in the thin air of Coors Field. But with all of those low curveballs, one wonders how the ever-dropping strike zone has contributed to the success of this type of pitcher. If the strike zone suddenly began contracting, would hitters learn to lay off that low and away curve?

For now, though, Nick Masset's curveball is the new standard-bearer for the hardest pitch to hit for a home run in the majors, at least by one measure. But this is a fragile honor: hang one pitch to the wrong batter, and Jim Johnson will claim Masset's spot.

Bryan Cole is a featured writer for Beyond the Box Score and really likes the phrase "arm-side run," even though it doesn't apply here. You can follow him on Twitter at @Doctor_Bryan.