Pitchers are MVPs, too

An argument in favor of considering pitchers as MVP candidates, because, you know, pitchers are MVPs, too.

Share All sharing options for: Pitchers are MVPs, too

I'm not one of those people who obsesses over baseball's awards season. It's cool when a player you love is considered for the MVP, the Cy Young, or wins a Gold Glove or Silver Slugger, but for every recipient, there often are a half dozen or more players who could be equally as deserving. Just because someone has an extra tenth of a point of WAR or a smaller FIP by two hundredths doesn't really separate him from the competition. As even Dave Cameron has pointed out lately, that margin could simply be noise in the data, not true performance. As you probably understand, what I'm trying to say here is that awards are given in a black and white fashion, yet performances are often various shades of grey.

Why King Felix deserves more than a crown

One area that seems incredibly grey is whether or not pitchers should be considered serious candidates to win the MVP award. This is perfectly black and white to some, usually those who simply say "no," but to others, there's a whole host of qualifiers that might make it okay. Arguments like, "well, only if there's no true impact position player" or, " only if the pitcher is having an historic season," are commonplace amongst fans and commentators. Some of this is the fault of the criteria for the award, which are so incredibly vague that one wonders if the "criteria" even qualify as criteria at all. Essentially, voters are instructed to select the MVP based upon what "most valuable" means to them as an individual voter. As you can imagine, different voters approach the vote differently. For example, it seems as if the MVP voters break down into two camps, those who value WAR as a measure of talent and those who prefer to value on-field performance, which WPA captures. We'll return to this disconnect in a second.

But first let's address some of the common reasons why people don't think pitchers should be considered. Often, the argument is that a pitcher, and in this sense we mean a starting pitcher, only plays once every five days while position players play nearly every day. The logic assumes that position players influence their team's chance to win day-in and day-out, but pitchers don't. But basing this on the calendar may not be the best use of logic. Instead, perhaps it's most fitting to look at the number of plate appearances they impact. Most hitters get four cracks at the plate a night. Over the course of the week, that's an average of 27.04 plate appearances a week for all 2014 qualified batters. During a start, the average qualified starter has faced 26.07 batters per start (for all 2014 qualified starters). If a starter makes one start a week (although in reality they make slightly more), we're looking at impacting nearly the same number of plate appearances. Rather than spreading them out over the course of a week, starting pitchers lump this impact into a single night on the mound. Still, the overall impact is relatively similar.

Running a correlation between WAR and WPA for all qualified batters and pitchers returned significantly different results. For batters, this correlation ran at .640, which shows a somewhat strong relationship between talent (WAR) and results (WPA). When run for the batters with the 25 highest WAR totals in 2014 (a sort of arbitrary who's who of position players since we're talking about awards here), that correlation actually fell to .573, decreasing the relationship between talent and results. 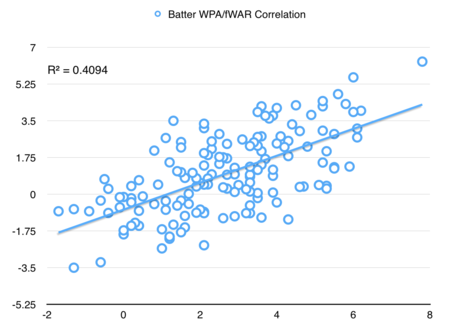 On the flip side, pitchers showed a much stronger relationship. I ran this two ways to reflect two different nuances in pitcher evaluation, correlating WPA to both FIP-based WAR and RA/9-based WAR. Perhaps because both WPA and RA/9 WAR measures what actually takes place on the field, they correlate very strongly, resulting in a .940 relationship. Keep in mind, the valued of 1 means there is a perfect relationship and this correlation is moving in that direction. As we know, however, RA/9-based WAR is not the best way to evaluate the talent level of all pitchers (although it works well for some outliers). The FIP-based WAR and WPA correlation checked in at .720, besting the batter results by a fairly strong margin. When filtered for the top 25 pitchers in fWAR (again, arbitrary cutoff), that correlation remained nearly unchanged at .723. 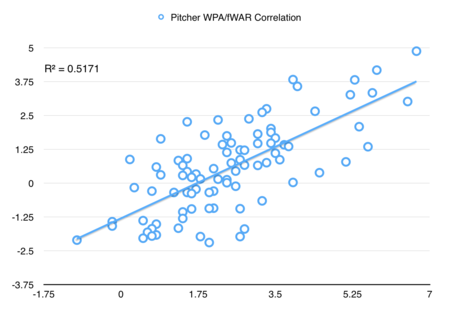 Without getting hung up on the merits of the metrics, which has been the basis of hundreds of articles alone, I think it's best to go back to the original question we're seeking to answer here: should pitchers be considered for the MVP award? I think the answer here is clearly "yes." As you've seen above, pitchers impact the game just as much as position players, they just do it differently on a different schedule. By either measure of talent (fWAR and RA/9 WAR), they show a stronger relationship between talent and results than position players do, at least based on this brief study. There are things to consider here, however, that may influence the data somewhat, largely sample size (90 qualified pitchers, 148 qualified batters) and defense. Still, pitchers have at least as much impact on games as position players, if not more, as shown above. They also impact a very similar number of plate appearances on a weekly basis, nullifying the common argument that pitchers have a smaller impact on games than position players.

So when making the argument to not include position players in the MVP race, at least don't base it on the argument that "they don't influence the game as much as batters do." You can blame it on the fact that pitchers already have the Cy Young, tradition, or maybe the fact that you just don't like pitchers. But in terms of influence and impact, I think we can see that his argument falls apart as pitchers are at least as deserving as position players.

Jeff Wiser is a featured writer at Beyond the Box Score and co-author of Inside the 'Zona, an analytical look at the Arizona Diamondbacks. You can find his work on craft beer at BeerGraphs and follow him on Twitter @OutfieldGrass24.