Zach Britton went from an inferior starting pitcher to a supreme closer who has mastered the art of getting ground balls.

Share All sharing options for: Zach Britton: The master of ground balls

A year ago from the day this piece was written (9/27), Zach Britton pitched 3.2 scoreless innings out of the bullpen, his first and only relief appearance of the season. At the time, it seemed pretty insignificant. I mean, despite not allowing a run, Britton gave up five hits and struck out only two. Nothing special, right?

Well, it just so happened that it paved the way to Britton's success as a closer in 2014. During that relief appearance, Britton faced 14 batters and forced 11 ground balls. That's an absurd amount of grounders, even considering he owned a career 56.8 ground ball percentage up to that point. So, because of his past performance, one would be wise to guess that this outing was a fluke. His ground ball numbers were sure to regress back to the mean.

But the Baltimore Orioles decided to keep him in the bullpen in 2014 and eventually named him closer part way through the season, and that has been all the difference for Britton. After a full season out of the pen, his GB% has still yet to decline, and he leads relievers in GB% and would be first among starters if he qualified. 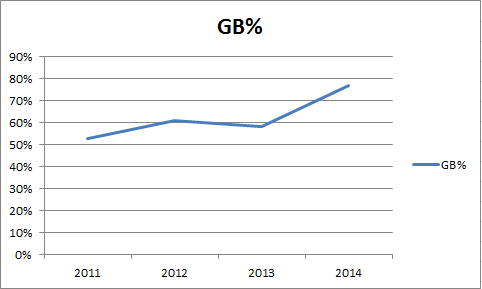 Since being removed from the rotation, Britton has completely cut out his four-seam fastball, throwing only five this year after throwing 201 in 2013, and has upped his sinker usage. Additionally, the velocity on his sinker has increased by over four miles per hour. Thus, the ground balls. 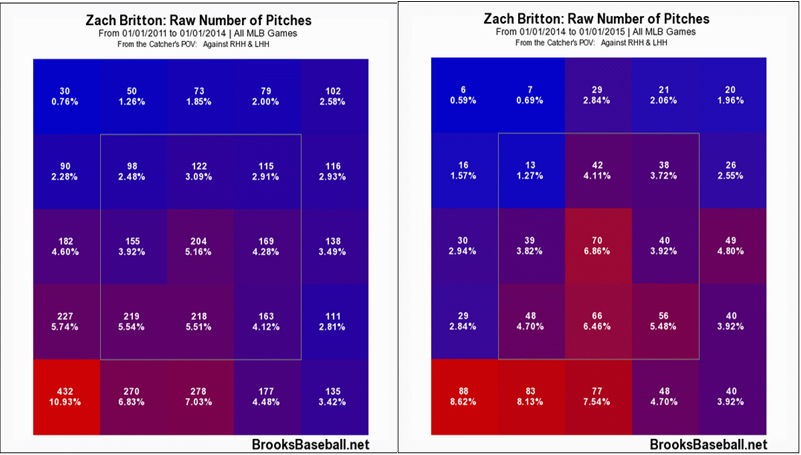 The chart on the left is Britton's pitch location from his first three years in the league, while the chart on the right is of this past season. Britton is hitting the bottom half of the zone more than ever, making it hard for hitters to get on top of the ball.

Moving Britton to the bullpen, particularly to the closer's role, means he doesn't have to face hitters multiple times. That also means hitters only have one shot to beat his sinker, which is almost impossible considering Britton is allowing a .188 batting average when he throws it. That's down from a .274 average when he was a starter. He's getting more ground balls, and ground balls are usually outs for Britton, as is evident by his .216 batting average on balls in play.

Britton has recorded 36 saves in 40 chances and has helped solidify Baltimore's bullpen, which is one of baseball's best with a 4.5 fWAR. I don't necessarily believe he can continue forcing this many ground balls, as a one-year sample size is extremely small, but as long as he stays away from the rotation and continues to pound the bottom of the zone, he should be just fine.

Justin Schultz is a Featured Writer at Beyond the Box Score. You can follow him on Twitter at @JSchu23.