Mike Fiers and the value of sabermetrics

His 2013 nightmare fully behind him, the Milwaukee righty has returned to greatness in 2014. But could he have avoided the whole ordeal to begin with? And what role did traditional stats play in it?

Share All sharing options for: Mike Fiers and the value of sabermetrics

Why do we — the royal we — use advanced statistics? What purpose do they serve, when we have more basic numbers? Well, for one thing, these new figures tell us considerably more than their predecessors about the performance of a given player. Plus, random variation doesn't impact them as much as it does for more basic metrics, so we can put more trust in them. And most importantly, they can grant us a better idea of what will happen in the future.

Nothing epitomizes both sides better than the ERA versus xFIP debate. Proponents of the former will point out that it has a relatively simple formula: Take a pitcher's earned runs, multiply them by nine, and divide the product by his innings pitched. As opposed to xFIP, which utilizes several other variables with weird coefficients and (gasp) a constant, this seems preferable in its simplicity.

The Luddites who take this side fail to spot a few crucial flaws in that argument. First of all, ERA doesn't testify to the aptitude of a pitcher, so much as it testifies to the aptitude of the pitcher, his defense, his ballpark, and luck, among other factors. On the flipside, Defense-Independent Pitching Statistics (such as xFIP) look solely at the man on the hill. Second of all, because of its reliance on multiple elements of the game, ERA vacillates wildly: Its year-to-year correlation sits at an uninspired .38. Compare that to xFIP, which correlates between seasons at a much stronger .68. Third of all, xFIP has considerably more predictive power than ERA. That means a pitcher's xFIP will tell us more about how he'll pitch going forward than his ERA.

People in the game itself know about the many benefits of xFIP, or at least they should. And yet, on a fairly regular basis, instances arise that seem to attest otherwise. In many of these cases, xFIP and ERA told different stories about a pitcher, and the decisions made regarding that pitcher jelled with the tale that ERA spun. If the reverse had been true, things might have gone more smoothly.

Enough of that. How about those Brewers? They...kind of fell apart. So, yeah, Milwaukee won't make the playoffs, but their campaign had its positive elements. Jonathan Lucroy teamed up with several of his team's pitchers to create a formidable umpire-duping tandem. Carlos Gomez eradicated any notions of flukishness surrounding his 2013 breakout, and Wily Peralta made some strides of his own. And, perhaps most notably, Mike Fiers returned triumphantly.

Remember Fiers? He came up in the middle of 2012 as a nobody. Prospect lists and evaluators all overlooked him, and for seemingly good reasons: In 55.0 AAA innings prior to his call-up, he owned a 4.42 ERA (and 4.45 FIP) as a 26-year-old. He certainly built off that upon arriving at the show, as he finished 2012 with a 3.74 ERA, 3.47 xFIP, and 3.1 WAR in 127.2 innings. The latter mark ranked fourth-best among rookie hurlers. Although he arose from nothing, he was apparently on the track to stardom.

Then 2013 came around. From Fiers's first start, in which the Diamondbacks battered him for six runs en route to a 9-2 loss, it became clear that something was wrong. After that disaster, the club trotted him out as a reliever, with middling results; he had some more subpar starts, went to the minors, and capped it all off with a broken arm. His major-league stats for the season: 22.1 innings, a 7.21 ERA, a 4.41 xFIP, and -0.6 WAR. When he began 2014 in AAA, no one knew if he'd ever reach the major leagues again, much less if he'd regain his 2012 form.

13 appearances and 65.2 innings later, Fiers has, once again, shown himself to be a legitimate major-league starter. Sure, a 1.92 ERA has some luck behind it, but a 3.21 xFIP means he still pitched quite well. With 1.5 WAR in that abbreviated sample, the future once again looks bright for him.

So, what happened in 2013? Why did Fiers's ERA — and, more importantly, his xFIP — take a nosedive? He didn't make any significant changes to his pitch mix, and he actually gained velocity on almost everything he threw. But he did alter something, and examination of his in-game action will prove it. 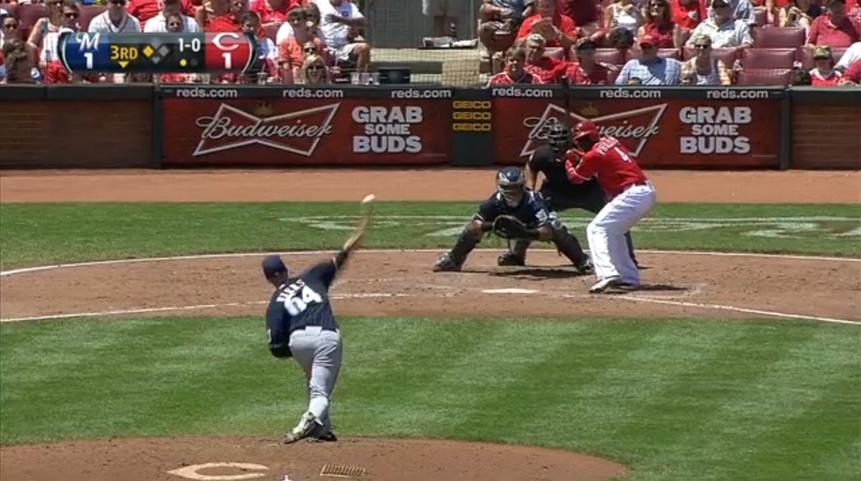 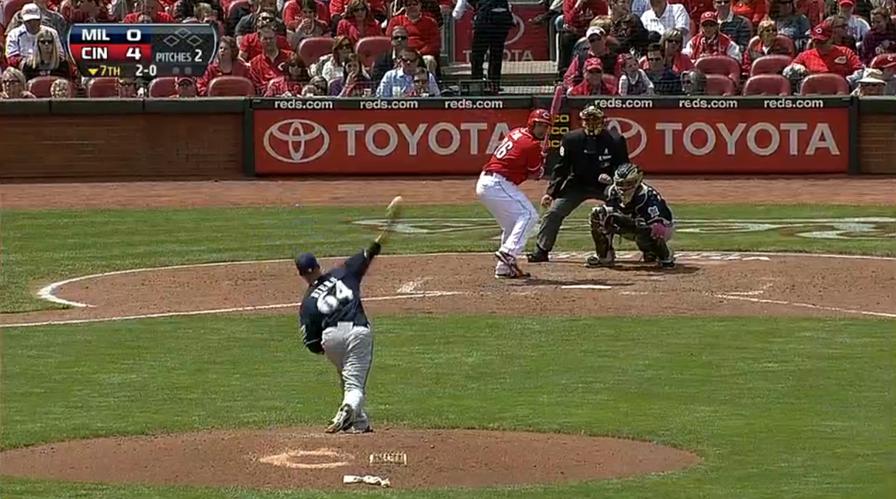 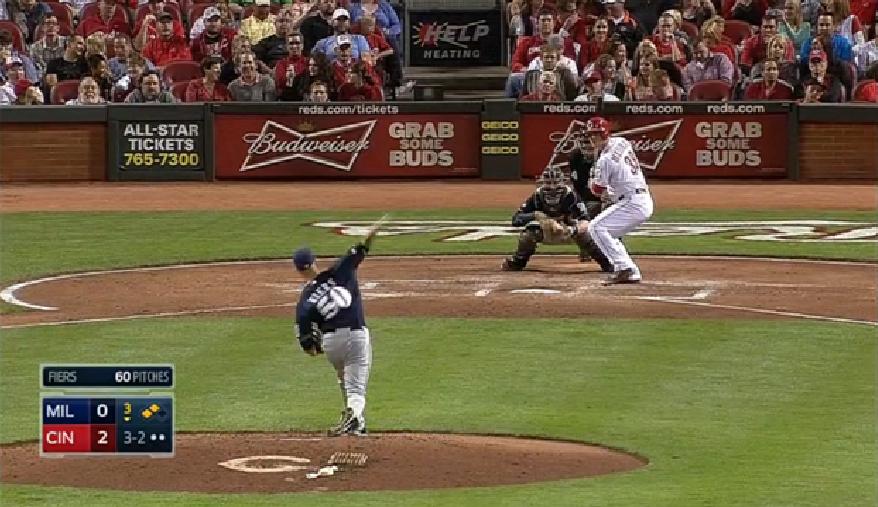 *I would have used clips of him at Miller Park, but they moved their mound logo after 2013.

These games weren't anomalies, either, as you can see upon examining his horizontal release points: 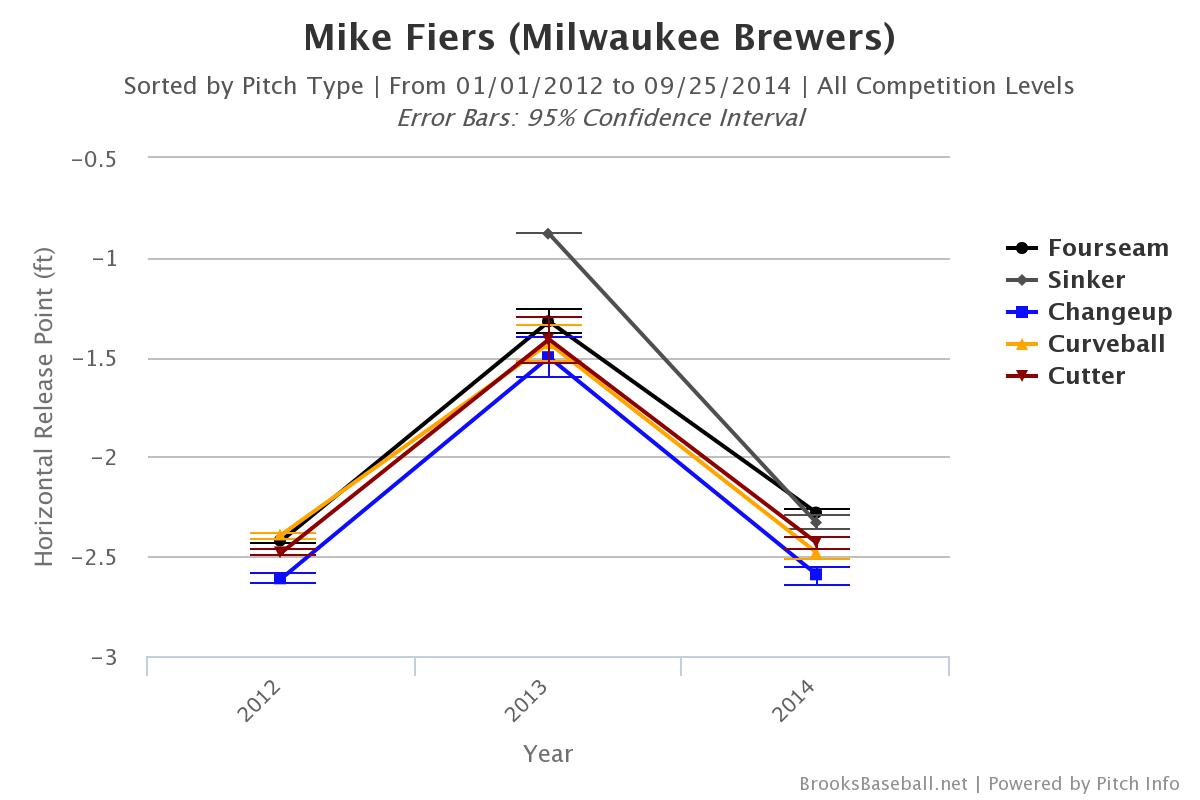 Sure enough, Fiers shifted about a foot to the right. Given that his velocity and usage remained mostly static throughout the three-year period, I think we can conclude that this caused his 2013 devolution.

But why would Fiers do this? After such a memorable debut, what would have driven him to divert from what worked? In other words, why did he mess with success? Because I'm not Fiers himself, nor do I have any role within the Brewers organization, I obviously can't say for sure. However, I can say that a greater awareness of sabermetrics probably could have precluded the 2013 debacle.

Allow me to explain. Fiers posted a 3.74 ERA in 127.2 innings in 2012. In terms of ERA-, that translates to a 92 — respectable, but not spectacular. However, at one point in the season, he prevented runs at a truly elite rate. On August 7th, following an eight-inning, one-run masterpiece against the Reds, his ERA sat at an astounding 1.80, 56% better than the MLB average. In his 80.0 innings to that point, everything had ostensibly gone right.

Six days later, Fiers went into Coors Field, and did about as well there as most pitchers do: He allowed eight earned runs, and only accrued six outs. From that loss until the end of the year, he had a putrid 6.99 ERA, "good" enough for a 172 ERA-. Those 47.2 innings transformed his seasonal line from otherworldly to mediocre, and possibly led him to think that he needed to change something. After all, he was all but unheard of before that year; maybe hitters — who had no familiarity with him early on — had adjusted to him. In order to survive, he would need to adjust back. Hence, the new location, which begat all of the aforementioned turbulence.

Situations such as this are where sabermetrics are most useful. As I discussed earlier, because ERA depends on factors outside the pitcher's control, it's rather volatile. Sometimes, it'll rise or fall legitimately, but a lot of the time, its fluctuations come as the result of random variation. By contrast, xFIP (and its contemporaries) isolates those skills that a pitcher determines for himself, and thus will better reflect how he did. So how did xFIP feel about 2012?

For the year as a whole, Fiers possessed a 3.47 xFIP (89 xFIP-). The first sample saw Fiers produce a 3.38 xFIP; in the second sample, it skyrocketed...to 3.62. The former comes in at 13% better than average; the latter, 7%. That's hardly a meltdown, and it certainly isn't a development that necessitates such a drastic modification as the one Fiers underwent. Considering that the change gave him an xFIP- of 117, I'd say it was for the worse.

In 2015, the Brewers will most likely return to contention; if they do, Fiers will probably help them in their pursuit of a title. 2013 could end up as nothing more than a blip on the career trajectory of a phenom. But the larger point remains: It shouldn't have happened. And the fact that it did happen shows that someone — Fiers, his pitching coach, his manager, or another person — leaned on the wrong narrative in their decision-making. If they don't learn from their mistakes, it could happen again, and Milwaukee would have to deal with the consequences.

All data courtesy of FanGraphs and Brooks Baseball, as of Saturday, September 27th, 2014.

Ryan Romano is an editor for Beyond the Box Score. He also writes about the Orioles on Birds Watcher and on Camden Chat that one time. Follow him on Twitter at @triple_r_ if you enjoy angry tweets about Maryland sports.