Clinching: How Early is Too Early & How Much Rest is Too Much Rest

The Angels, Orioles and Nationals clinched last week, but is it a positive thing to clinch with so many games left to play? Examining the optimal time to clinch, and the optimal amount of rest.

Share All sharing options for: Clinching: How Early is Too Early & How Much Rest is Too Much Rest

Last week was a big week for the Angels, Orioles and Nationals, all of whom clinched their respective divisions and the beltway teams both clinching on Tuesday. Now each team can prepare for the playoffs by resting players and setting lineups, and the SoCal and beltway sports talk airways can endeavor on the endless debate of how much or how little Mike Scioscia, Buck Showalter and Matt Williams should rest their starters.

Dave Cameron showed that second-half momentum does not have a carryover effect into the playoffs, but the question remains as to whether or not a team benefits from throwing out a JV team once they have punched their ticket to the playoffs. While every team varies in age and durability, there is no denying that once a team clinches managers will rest players, but how much rest is too much, and how many days of ‘lame duck' baseball is optimal? Does sending out a sub-optimal lineup to rest regular starters have any discernible impact on a team's playoff performance?

It is our attempt at Beyond the Box Score to transcend narratives and dive into the numbers. By identifying the date a team clinched their division (or for the wildcard team, when they clinched the wildcard and were out of the divisional race) and comparing rest of season lineups with the lineup in game one of the team's first playoff game, we can analyze the amount of rest given to starters compared to playoff wins. To normalize the numbers between the two leagues, only eight fielders were used as comparable ------ no designated hitters or pitchers are included. Game one playoff lineups were used as the baseline of each team's ‘optimal lineup'. Although this may not be the case 100% of the time due to platooning, platooned players' impact is generally negligible in the large enough sample size from 2009 to 2013. Let's dive into the numbers.

Going back to 2009, teams that clinched the division earlier than the last day of the season rested their starters between 12.5% and 40% of the time until the playoffs started. Two World Series winners, the 2010 Giants and the 2011 Cardinals, made it into the playoffs on the last day of the season and excelled, but they are the exceptions. The other three World Series winners had between six and ten days to rest their starters, and they took advantage resting their starters 29% of the time (2009 Yankees), 30% (2012 Giants), and 40% (2013 Red Sox). These teams did not have too much rest (over ten days) or too little (zero days rest). At the end is a table with remaining games, percentage of rested starters, and the playoff result.

Of the 45 playoff teams since 2009, eleven teams made it into the postseason on the last day of the regular season (or in the case of the Twins, in a one-game playoff) ----- those teams' results are not encouraging. It does not come as a surprise that teams with no time to set a rotation or rest starters did not do well, but the results are pretty stark. With the exception of the two World Series winners, few teams found much playoff success at all; of the 11 teams that made the playoffs on the last day of the season, 7 did not get out of the Divisional Series. Even if we expand our parameters to include teams that clinched the day before the regular season ended, the results still poor, as only 2 of the 18 teams made it to the World Series.

The trend line shown in the scatterplot shows a slight positive correlation between rest and postseason success, but when limiting parameters to LCS appearances, the results are more murky. Of the 20 teams that made it to at least the LCS, exactly half had the option to rest their starters five games or more, and on average, those teams rested their players 28% of the time during this period. The other half did not have an option to rest their starters for a significant period of time in the regular season, but they found themselves playing for the pennant anyway. On the Y-axis is the percentage of innings in which starters were rested (what I call sub-optimal rest of season innings), and on the X-axis are playoff wins. 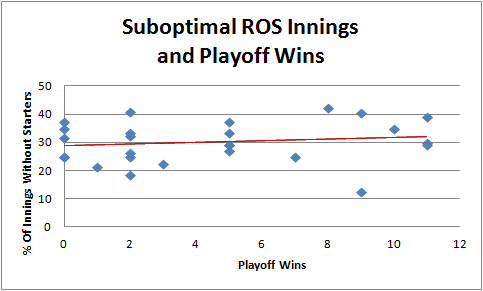 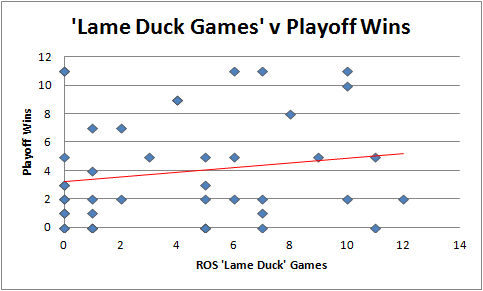 While managers should prioritize health above most everything else, there does appear to be a relationship between clinching several days early and resting players about 30% of the time the last week of the season and postseason success. The data also confirms that having no time to rest generally yields unfavorable results.

There are some obvious conclusions we can infer from this data. First and not surprisingly, a team that had no time to rest is going to be at a significant disadvantage when the playoffs start. It also seems that teams who have too much time off and rest their starters 30% of the time for over a week seem to have worse results than teams that have four to six days of rest.

The Angels, Orioles and Nationals can rest their starters and prepare their rotation for the postseason, but teams that have had more than 10 games of ‘lame duck' baseball generally do not make it to the World Series. If you want to pick a team most likely to win, it's statistically likely to be a divisional leader that clinches early this week, and has time to rest their players 30% of the time for several games. This is certainly something to track as we gear up for playoff baseball, and something to keep in mind if making projections for the playoff hunt. The teams with the advantage could end up being the Cardinals, Dodgers or potentially the Tigers.

All information courtesy of Wikipedia and Baseball-Reference.

Steven Martano is a contributing writer for Beyond the Box Score. You can follow him on Twitter at @SMartano.