Players exhibit significantly decreased walk rates in their first game back from the concussion list. Is this hangover effect due to changes in swing rates following time off the field, or is it something else?

Baseball might not be the first sport you think of when you hear about head injuries, but it seems like not a week goes by without another scary head injury. Stuart Wallace wrote a fantastic piece summarizing the issue. A few weeks ago I looked at concussions from a different angle in a piece I wrote at Batting Leadoff in which I examined whether or not there was a hangover effect for position players returning from the 7-day concussion list. In my sample of 32 players I found that strikeout rates were relatively stable before and after a stint on the concussion list--no significant differences. Walk rates however were significantly lower in the first game back from a concussion. Prior to the concussion, the players in the sample were walking 7.1% of the time. Compare that to a walk rate of just 2.7% in their first game back. This difference was highly significant with a p-value around 0.005.

Players are walking less in their first game back from the DL. So what? There are several possible reasons for this; it could potentially mean players are being rushed back from concussions without fully regaining their pre-concussion plate vision. It could also have nothing to do with concussions and could simply be due to players trying to prove something after spending some time off the field. Let us table the larger question regarding all players coming off the DL and remain focused on concussions.  I want to dig deeper into why players' walk rates are so low. At the suggestion of Tangotiger I pulled the pitch sequence data from Retrosheet in order to examine swing rates of these players.

Situational stats like RE24 are all the rage these days, but they're often unintuitive and difficult to calculate. In this article, I introduce a new metric that solves both of these problems.

This time I further refined my sample to include just players who had at least 30 plate appearances after their concussion, which eliminated Max Stassi and Devin Mesoraco. I also took out David Ross the second time to avoid double counting (Ross had two stints on the concussion list in 2013). Once I had the Retrosheet results, I threw together a Python script to extract the aggregate swing rate data for the group over a given PA range.

After all the data collection, I was ready to look for significance. Remember, we are looking to see if players' swing rates are significantly different immediately after returning from the concussion list. I used my function to get swing rates for each of the first 150 plate appearances following the concussion. Note that each "plate appearance" in my data is actually the aggregate of the plate appearances for each player in the sample. This makes my sample more robust. It is also important to mention that not all players reached the full 150 plate appearances, so the robustness of each data point tails off a little bit toward the end. This leaves the data more susceptible to random fluctuations, which is a potential source of error. 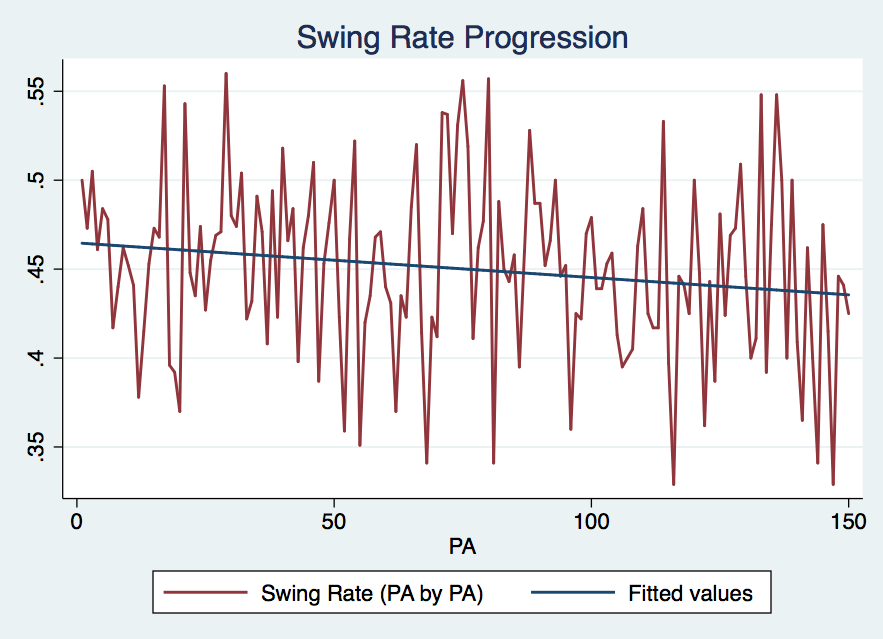 This shows that while we did get the results we were looking for, there is a good amount of fluctuation, so the result should not be overstated. This new finding, though not highly significant, is still very interesting. One could argue the lack of a highly significant difference could be evidence of decreased plate vision. If a player is swinging at close to the same rate and walking a lot less, he could be making worse swing decisions. This could be due to lack of seeing live pitching for at least 7 days, but it could also be due to lingering concussion symptoms.

We previously saw that there was a sharp drop in walk rates immediately following a stint on the concussion list. This study serves as more evidence that a concussion hangover effect exists. Swing tendencies increased by less than 3%, though this increase is likely not enough to explain the significant drop walk rates.  A future study could look for a similar effect among all players returning from the disabled list to see if in fact this result is due to concussion symptoms or simply due to time away from game action.  Again we end without an absolute answer, as is often the case in statistics, but we can be pretty confident that something going on is affecting players' tendencies and abilities at the plate.

All statistics courtesy of Retrosheet.

Daniel Meyer is a junior at Colby College and Contributor of Beyond the Box Score and Batting Leadoff. You can follow Daniel on twitter @dtrain_meyer.