Out of the Park 15 Review

Out Of The Park Developments recently released OOTP 15 and iOOTP 2014.

Share All sharing options for: Out of the Park 15 Review

Out of the Park (OOTP) is a well-known baseball simulation game, first released in 1999 and gaining much popularity in the baseball community. I have to admit, despite my cemented baseball nerd status, I was completely unfamiliar with the game until now. So for those of you who may be long-time OOTP-ers, this is a review from a first-time player.

To the best of my knowledge OOTP does not currently have a theme song, but if it were to have one, it would be Peter Tosh's Steppin' Razor, because this game is dangerous. It is so immersive and complex, you just may forget to feed your cats or spend time with your loved ones.

The first sensation that I had when playing this game was being overwhelmed. The game is so deep and customizable, it can be difficult to figure out where to start. Thankfully, an online manual and active community provide help, including the game developers. Also, the game is set up as a browser concept, so anyone with experience surfing the internet can get around fairly easily right away. To demonstrate this, I began a quickstart game using everything in its original state. After the game loads, this is the screen: 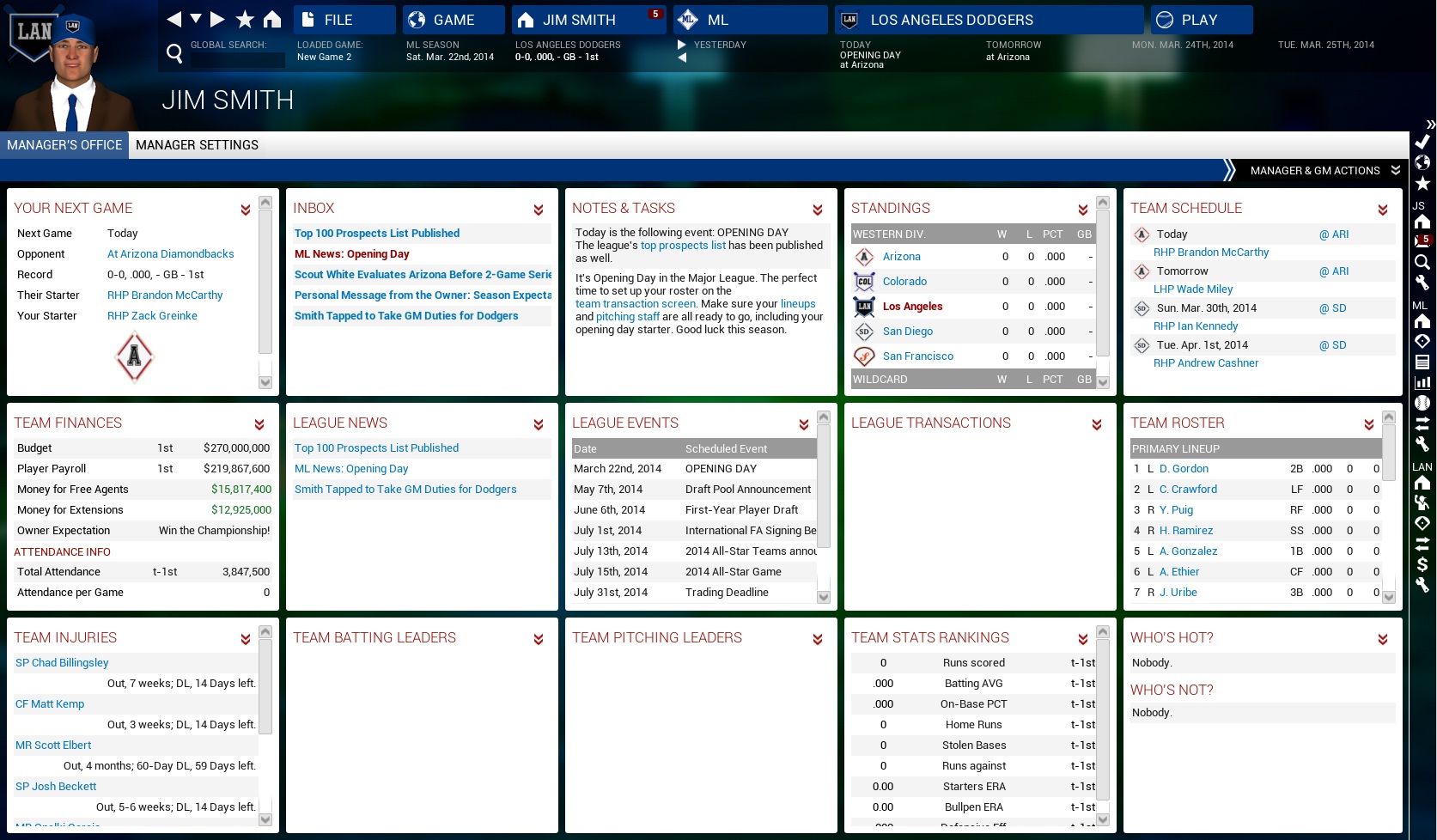 So yeah, there is a lot to soak in. You may also notice that real team logos are not included with the game, but there are many add-ons that take care of this and other similar issues, thanks to that very active online community. In each of the tabs, there are menus galore that hold all of the settings. For instance, here is one page of the league settings: 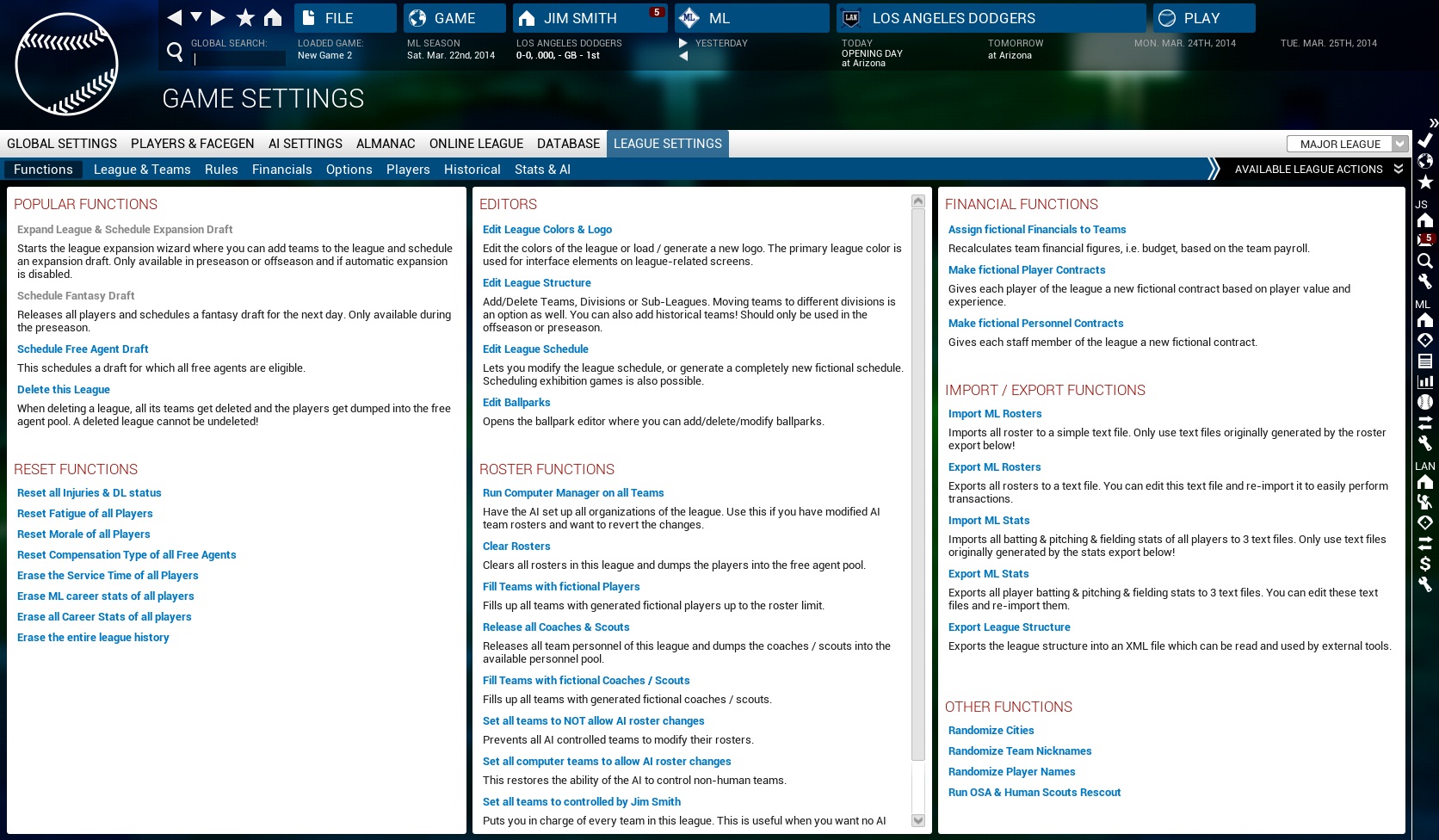 You can set the financials, change team names, reset contracts, whatever your heart desires, meaning you can make these leagues as realistic or fake as you want. You even have the option to set team strategy by inning and score situation. You can also set the strategy for each individual player.

When I play games, I like to create fantasy worlds where my team is completely perfect. So I'm in charge of the Dodgers and want to trade for Mike Trout. In the trade screen, OOTP provides a "Make this work now" option to help the aspiring GM make trades. If I click on that button to get Trout, it tells me, "You have no player who makes this deal work!" So then I offer Rookie-league middle reliever Brandon Martinez. Fake Jerry Dipoto tells me "You are kidding, right? I'd never accept this deal!" But he doesn't know about my secret weapon, the "Force Trade" button that illuminates in commissioner mode. 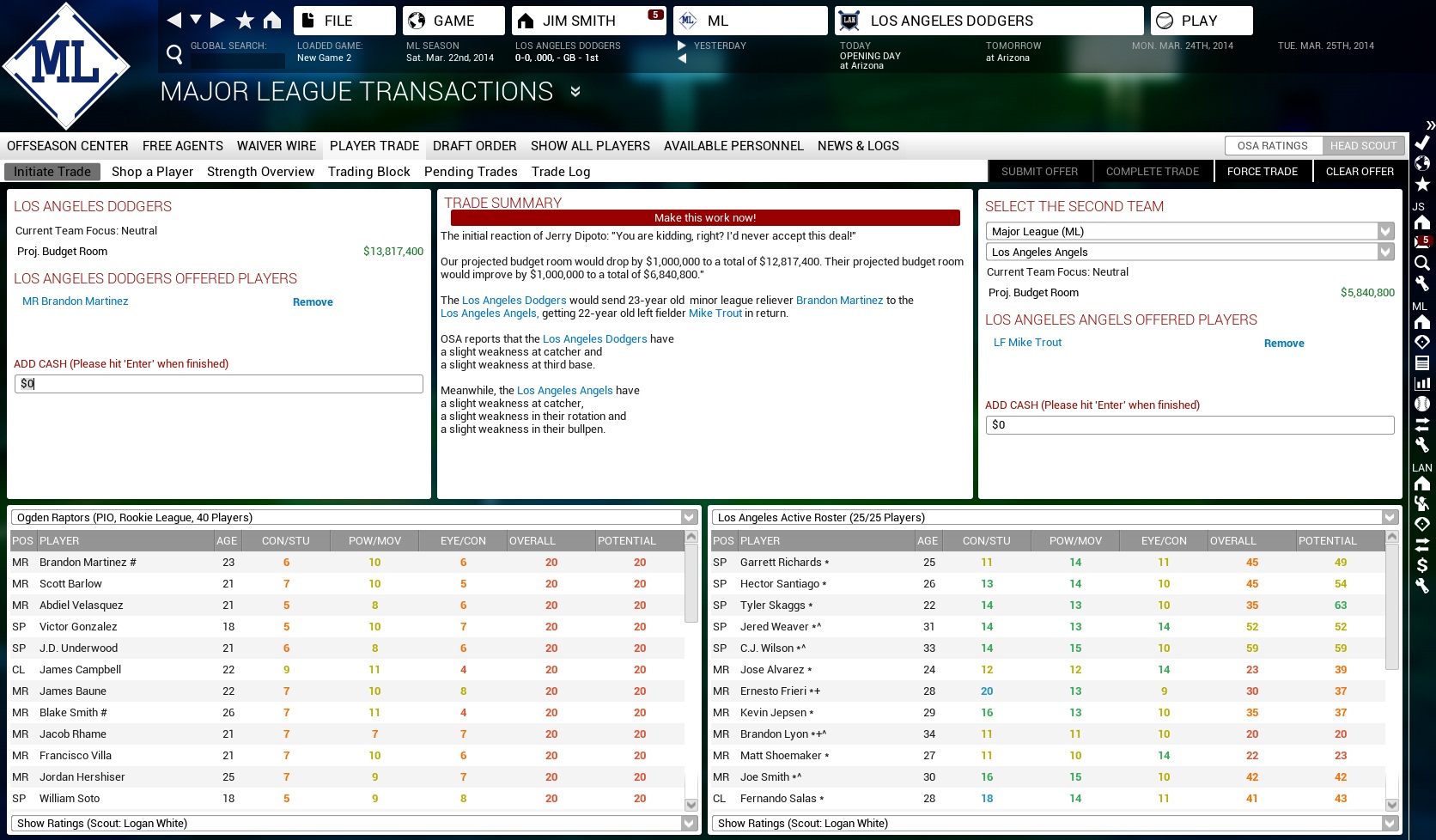 Thanks, fake Jerry Dipoto! The commissioner mode allows you to edit players and change rosters around as much as you would like.

But the driving concept behind this game is the actual games themselves. As mentioned previously, it is possible to simulate the games without having to play them yourself. Despite all of the underlying choices that can be made, it is still easy to start playing a game. This is what the game screen looks like: 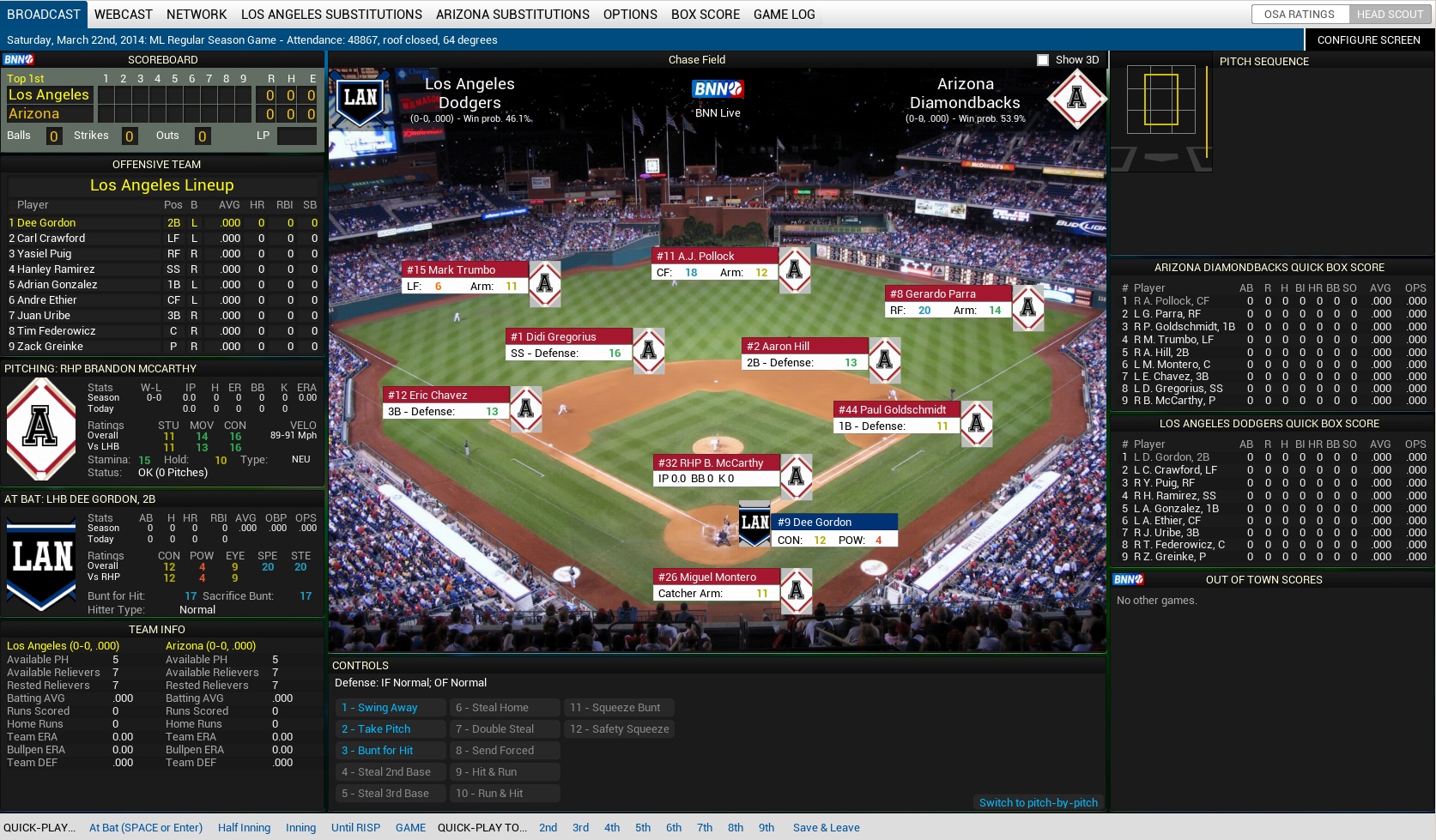 You can make decisions pitch-by-pitch, simulate the plate appearance, or jump to other parts of the game. A few issues I have here: first off, it's incredibly strange to make a decision on a pitch before that pitch is delivered. So if I have Dee Gordon up to bat, I have to tell him to swing or take before the I have any information on the pitch other than the game situation. That feels weird. Also, the quick-play is labeled "At Bat," when we all know that it should say "Plate Appearance."

A big new feature this year is the 3D option. It is in its infancy and the developers have promised that it will never supersede the management aspects of the game, but it is still exciting for a text-based game. Right now, the only change that you see in 3D is the trajectory of the ball. Here is a shot where Gordon is in the midst of grounding out to the pitcher (big surprise): 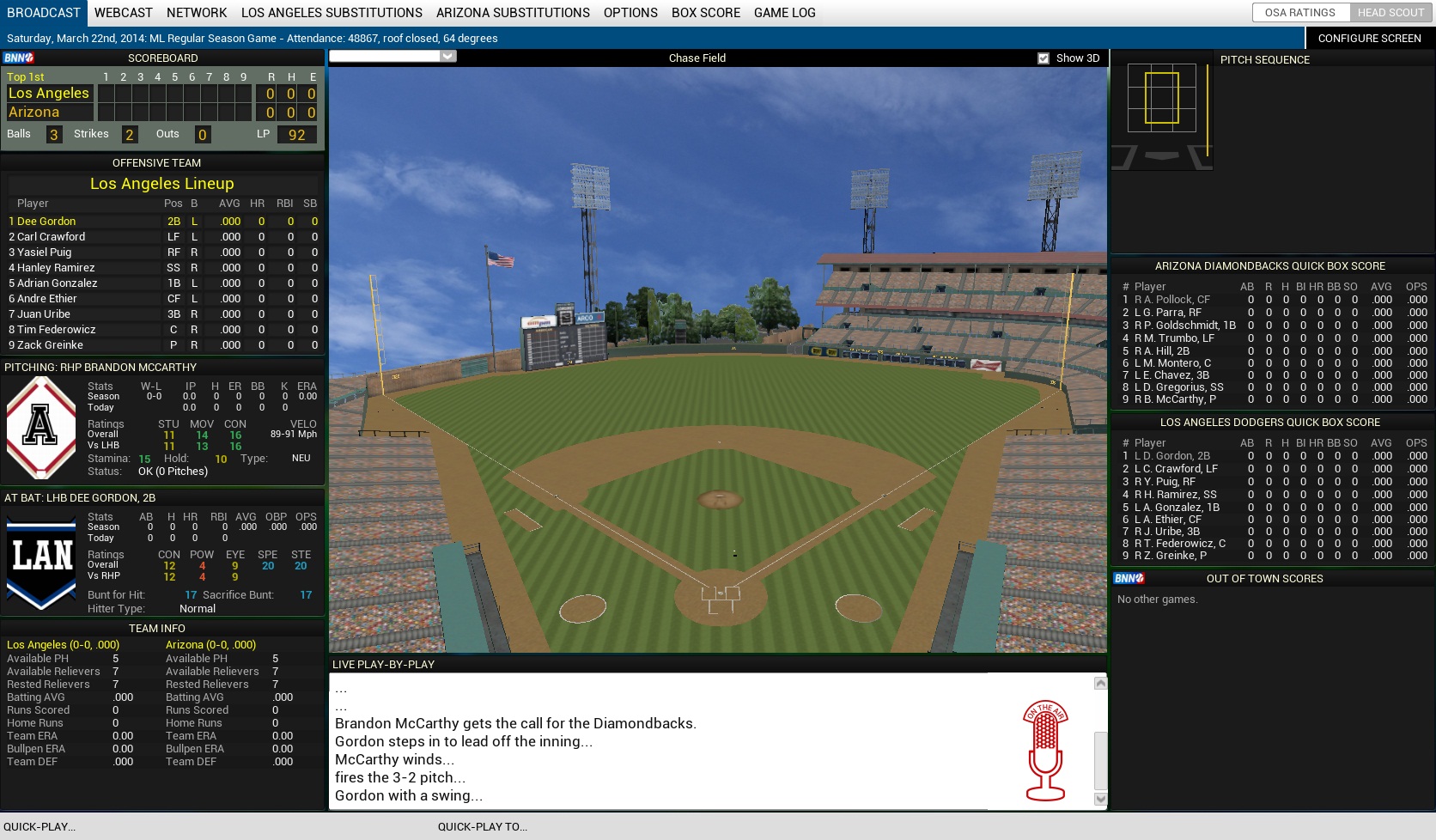 It looks very simple, but the community is expected to provide add-ons to help the stadiums look more realistic.

Also new to the game this year are real international leagues from Japan, Korea, Mexico, China, Cuba, The Netherlands, and Italy, along with their respective minor leagues. The rosters are real, along with the ratings. Free agents and randomly posted players will be available during the offseason from each league. I haven't been able to find a way to post players manually as a manager in the major leagues.

Beyond the actual gameplay, it is clear that OOTP was created by people who really enjoy the game of baseball and are also stat-friendly, so you will see numbers like wOBA and WAR in the game, though I'm not certain which versions they use as they don't match up to Baseball-Reference, Baseball Prospectus, or Fangraph's numbers. They also use these concepts in the simulation engine to make it more realistic. As an advanced-stat baseball guy, this is a huge selling point for me.

In total, this game is a micro manager's dream. If you want to make every decision for your team on every pitch in every game, you can do so. But if you would rather simulate a full season, you can do that as well. You have the choice to manually make every decision or have the computer automatically do so. Then you can play as many games or as few games as you would like. Regardless of how involved you would like to be in the game, OOTP allows you to do that.

However, it is important to stress that this is an entirely different type of game than MLB The Show or MLB2K, which are more accessible to the casual baseball fan. It is a baseball management game, so you have to either be crazy about baseball, management, or simulations to truly enjoy this game. If you are, this is what you need.

In addition to the full OOTP 15 game, I also checked out iOOTP 2014, the mobile version of Out of the Park. Obviously, as it is a smaller version of the game, it is not as comprehensive as OOTP 15. That doesn't mean it's bare-bones, though. The concept is very similar to OOTP, but it's just scaled down. You have the option to simulate 2014 or historical major leagues (a few years are included and the rest are available for purchase in the game), or a fictional league.

My favorite part of the game is the option to start with a draft. It's fun to try to put a team together from scratch, mixing veterans with prospects, and finding just the right players to fit the necessary roles. However, this can be a little difficult, as there is no filter for batting hand or age. I have also found that a whole bunch of middle relievers appear when ranking by best player available. Also, there is no way to jump to different pages of available players. So if you are on some page way back (they aren't numbered), you have to click the "Previous" button until you get to the front. Finally, players get really mad at you when you send them to the "minors" even if they are a 20-year old Byron Buxton. If your 25-man roster still has spots available when you draft a player, they automatically go there. Then you have to demote them to the minors, upsetting them. There are definitely improvements to be made in the draft process.

Once your team is drafted (if you chose that option) you can then set up your rotation, bullpen, depth charts, and lineups however you want. You also have the option of setting strategies, much like in the full game. This is obviously the strength of the game, providing limitless hours of tinkering and simulating. When playing an actual game, you have the option of setting your infield and outfield, managing the substitutions, and using various in-game strategies.

However, because of the nature of mobile gaming, this app does sacrifice some features and parts that would help gameplay. First of all, only 40-man rosters are included, and there is no minor league. When trying to set lineups, it takes an awful lot of work to find which hitters fare better in certain situations, as you can not view splits on the page to set the depth chart. I have also found that swiping does not always work on pages where it should.

Despite these few minor squabbles, iOOTP is still an amazing game. It provides an immersive experience much like the full-fledged desktop game, but in a much smaller package. If you have an iOS device, are a baseball fan, have $5 to spend, and haven't bought iOOTP 2014, you're doing it wrong.