Scoring from first on a double: easier said than Dunn?

One of baseball's old adages is runners on first should score on a double. How often does it happen, and does where the ball is hit play a role?

Share All sharing options for: Scoring from first on a double: easier said than Dunn?

On Thursday, April 17th during a game between the Red Sox and White Sox, Alejandro De Aza doubled down the right field line with Adam Dunn on first and the game tied 1-1. Daniel Nava got to the ball quickly, fired a bullet to Dustin Pedroia who threw the relay home to beat Dunn by about two steps:

It made me wonder how often runners on first score when a double is hit. Is it as cut-and-dried as most analysts think?

Not all doubles are the same, nor are all situations. Doubles down the left or right field line are different from ones in the gaps, and inning, score, fielder and runner also play significant roles. This table shows data since 2009 on the number of runners on first who score on a double (all data through Saturday's games):

This is derived from play-by-play data gathered at Baseball-Reference and is stratified by hit location, so the choices of left, center and right might be arbitrary. I included any base state in which a runner was on first (1--, 1-2, 1-3 or bases full) and used RBIs to see if the runner on first scored. For example, if there were runners on first and second and both runs scored, it means the runner on first scored.

Runners scored from first on doubles hit to left around 40 percent of the time, to center around 55 percent and right around 35 percent. Left fielders tend to have weaker or more inaccurate throwing arms, as well as fielders who might be considered defensively challenged. For example, White Sox left fielder Dayan Viciedo is considered to have a strong throwing arm and was among the top 10 outfielders in assists in 2013. Unfortunately, he was also among the leaders in errors as well, making him a mixed bag in left field. It would be interesting to see the breakdown of balls hit down the line vs. in the gap to see if the percentages change as I suspect doubles down the line allow more runners to score.

Doubles hit to center are balls hit in the gap that roll close to the outfield walls, meaning not only will the fielder have to make a longer throw, but the balls will take longer to reach and grant the base runner more time to score. Couple this with the trend toward players who can cover more ground vs. a strong throwing arm, and all the elements line up to allow for runners to score from first--balls hit that take longer to reach and require longer throws, and more likely, relays.

Doubles to right are hit to the fielder with the best outfield arm traditionally, which probably explains why the percentage drops a bit vs. doubles hit to left. I'll admit I was slightly surprised by the right field numbers, since I thought the distance of the throws would allow for more runners from first to score. Conversely, I thought there would be a smaller number of runners scoring on doubles to left because it's a shorter throw, but this doesn't appear to be the case.

My rough timing of Dunn's play was 11.61 seconds from contact until the tag was applied. Adam Dunn is not the fastest player in baseball, but he's no Paul Konerko either. Most likely a pinch runner could have scored, but the facts remain that both Nava and Pedroia made precision throws that were right on the money. If either throw was off by even a couple of feet, chances are Dunn could have scored standing up.

My overall point is a simple one--the notion that scoring from first on a double is a given has never been true. In fact, removing hit location, this graph shows how often runners have scored from first on doubles since 1950: 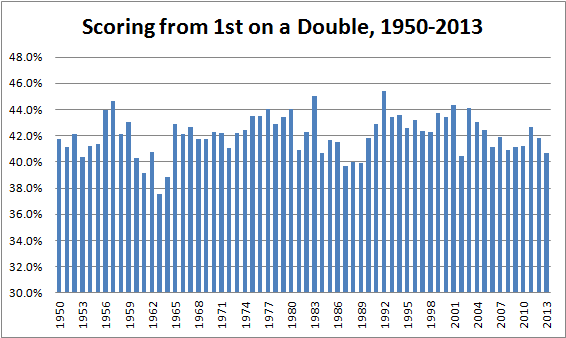 Less than 50 percent of the time do runners on first score on a double, and when it does occur it's typically a combination of a fast runner coupled with a weak or inaccurate outfield arm. It's been relatively stable over time, so there was never a Golden Age of Base Running (or of Outfield Arms either) as much as a quaint notion that doesn't stand up to the scrutiny of the data.

This post was made possible with the amount of data that was inconceivable even ten years ago. This will be the extremely rare occasion when I strongly urge readers to look out for my next post, which will discuss the recent data explosion phenomenon in the context of how to properly use it.

All data from Baseball-Reference.com. Video from mlb.com.