The pace of Major League Baseball games is again a topic of debate this season. Much of the conversation is related to the pace of pitchers on the mound. Here we examine if a pitcher's pace is influenced by their pitch repertoire.

Share All sharing options for: Pitcher Pace and Pitch Repertoire

Recently, the issue of the pace of Major League Baseball games has received increased attention. Much of this renewed interest has been generated from the delays that result from replay. This has led people to examine the pace issue in greater depth and propose ways to speed up the game (like here and here). One fix that is commonly proposed is for umpires to actually enforce Official Rule 8.04, which states that when the bases are unoccupied, the pitcher should deliver a pitch to the batter within 12 seconds of receiving the ball back from the catcher. If the pitcher violates this rule the umpire is supposed to call a ball. Despite the average time between pitches being consistently over 20 seconds, an umpire has yet to enforce this rule.

With the time between pitches being clearly in violation of the rule, a lot of blame for the slow pace of baseball games has been placed on pitchers. Interestingly, as Carl Bialik at FiveThirtyEight showed, a pitcher's pace is considerably consistent from year to year. However, pace does not have a clear influence on measures of pitching performance such as fielding independent pitching (FIP) or win probability added (WPA). Moreover, the old adage that pitchers who work quickly help their defense stay alert and perform better does not find supporting evidence, as pace does not seem to influence defensive efficiency or batting average on balls in play (BABIP).

Despite the lack of direct influence on performance, the consistency of a pitcher's pace remains interesting. Is there something driving a pitcher's pace? Could it be that the number of pitches in a pitcher's repertoire has an effect? Specifically, I wanted to test the hypothesis that pitchers with more pitches in their repertoire will be slower because they have more pitch options to consider before delivering to the batter.

To examine this idea I examined Pace data from FanGraphs for the 2008-2014 seasons. This period was selected because it represents the period for which reliable PITCHf/x data are available, which is used to measure pace. Pace gives the average time in seconds between pitches. To be included in the sample, starting pitchers had to have at least 250 innings pitched (IP) and relief pitchers had to have at least 150 innings pitched over the time period selected. 224 starters (avg. IP = 649.53) and 199 relievers (avg. IP = 253.59) met these requirements. Pitches were categorized as fastballs (fourseam, two-seam, cutter, split-fingers and sinkers), changeups, curveballs, sliders, or knuckleballs.

Before digging further into the specific analysis, here are the five fastest and slowest starters and relievers for this sample.

Now, we can take a closer look at pitcher pace as a function of pitch repertoire. First, I split all pitchers into three groups based on the rate at which they throw their fastball: (1) over 75%, (2) between 50 and 75%, and (3) below 50%. Across these categories there were 14, 195, and 15 starting pitchers, and 36, 143, and 20 relievers. This is not the best distribution across categories but it works as a starting point. As is evident in the figure below there was no difference in pace across these categorizations, but a clear difference between starters and relievers: 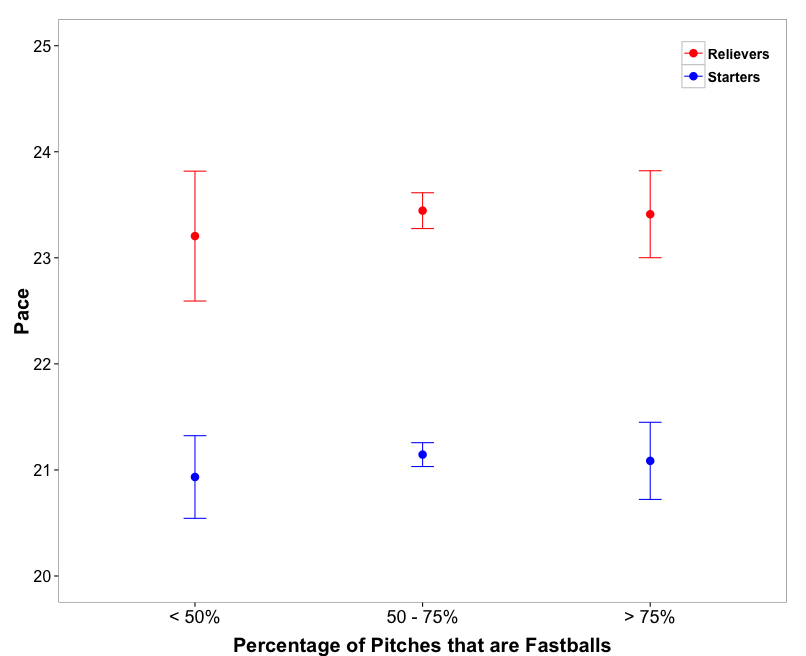 For clarity here is fastball percentage plotted directly against pace: 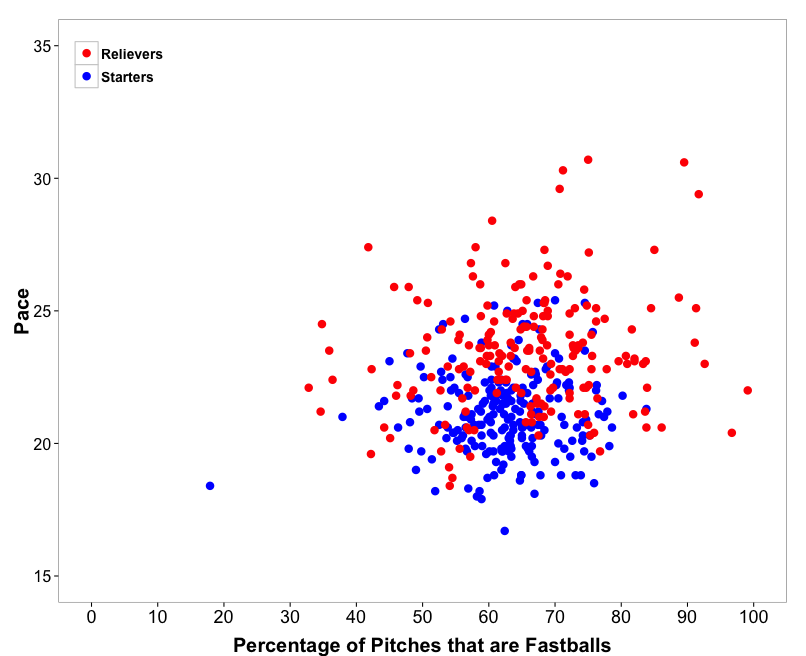 Again, the difference between starters and relievers is evident. However, the relation between fastball percentage and pace is not evident. For starters the r-squared is 0.002, and for relievers it is 0.02. Interestingly, the reliever data show that pitchers throwing their fastball more are actually somewhat slower, which is counter to the hypothesis.

While it does not seem like there is much of a relationship here, I next split pitchers into groups based on the number of pitches they threw at least 10% of the time, based on the PITCHf/x data from FanGraphs. This led to categories of pitchers with 1-, 2-, 3-, or 4-pitch repertoires. Across these categories there were 6, 67, 122 and 29 starting pitchers, and 11, 129, 59 and 0 relievers. Here are these pace data: 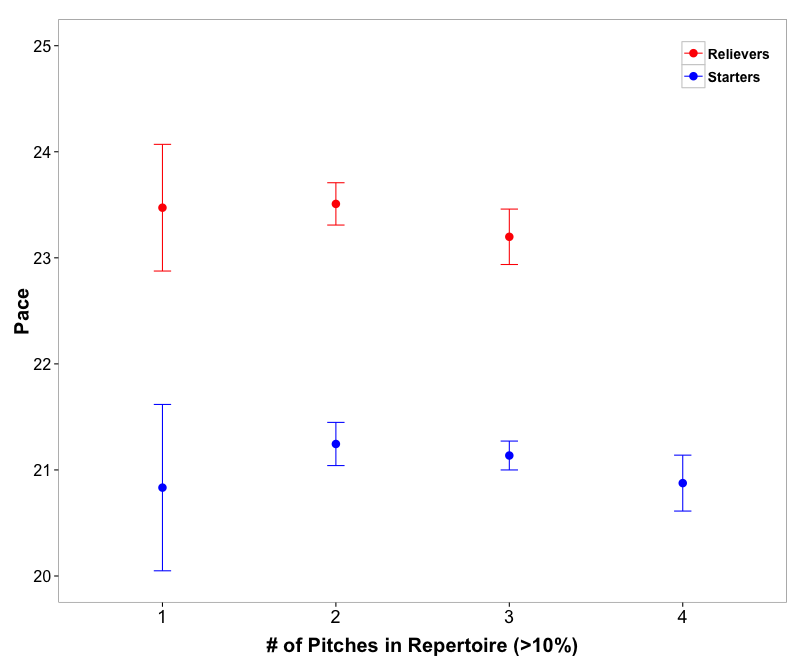 Again, we find little evidence for increased pitch repertoire leading to slower pitcher pace. If anything, we see the opposite.

For a final look at this relationship, I increased the cutoff for the pitch repertoire to only include pitches thrown at least 15% of the time. This led to categories of pitchers with 1-, 2-, or 3-pitch repertoires. Only 1 pitcher, Bronson Arroyo, had 4 pitches meet this increased requirement. Looking at 1 pitcher in this context is not informative so he is grouped in with the 3-pitch pitchers. Across these categories there were 46, 139 and 39 starting pitchers, and 34, 140, 25 relievers. While this is slightly overkill at this point, at the very least these sample sizes are better. Here are these pace data: 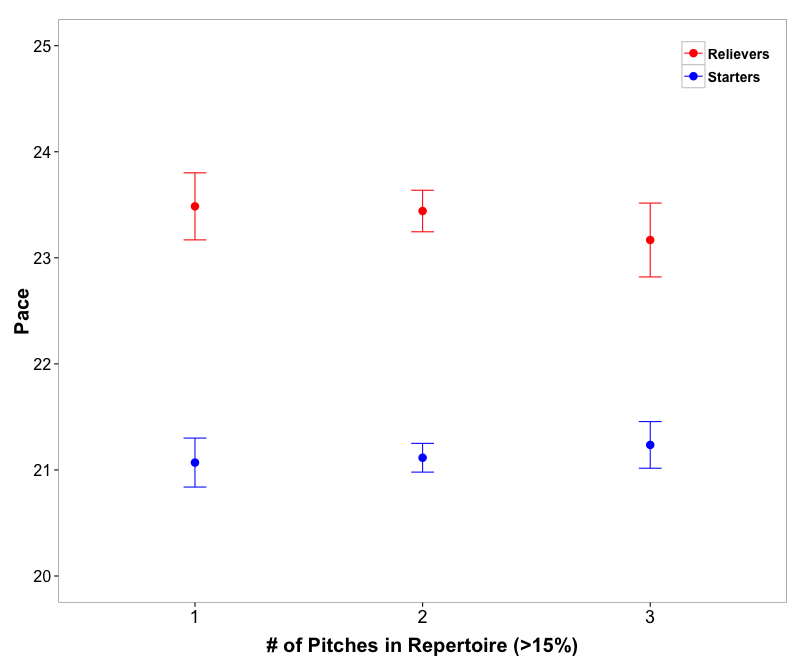 Again, the only clear difference is between starters and relievers.

Taken together these analyses provide good evidence against the hypothesis that having to consider more pitch options leads to a slower pace on the mound. The only evident difference here is that between starters and relievers, which I suspect is a function of pitching in different leverage situations with runners on base. Regardless, pitcher pace is driven by something other than pitch repertoire.