How much does a team's early-season record inform their playoff odds?

How many games do teams need to play before making educated guesses on their playoff chances? It might be fewer than you think.

Share All sharing options for: How much does a team's early-season record inform their playoff odds?

A couple weeks ago I wrote a post discussing how well early season records translate into making the playoffs, using the example of the starts of the Milwaukee Brewers and Arizona Diamondbacks as polar opposites. In the meantime the Brewers have continued to play good baseball (18-6 through Saturday) and Arizona, despite winning two of three against the Cubs are still mired at 8-19 (also through Saturday).

This is the time of year when announcers, talk show hosts and web columnists start asking "How many games does a team need to play before we know what kind of team they really are?" So far this year, I've heard anything from 30 all the way to 60. I almost choked when I heard 60 -- at that point the season is almost 40% played, and absent drastic and unpredictable events (trades, injuries, phenoms like Yasiel Puig who totally outperform any reasonable expectation) the team has moved beyond the prediction phase to that of actual. This table shows performance at the 60-game mark since 1995, when the divisional playoff level was added: 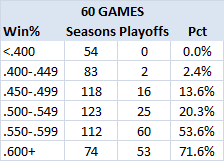 I don't find these numbers surprising, but I'm more curious how many fewer games can be played before reasonable inferences can be made. This chart breaks it down more: 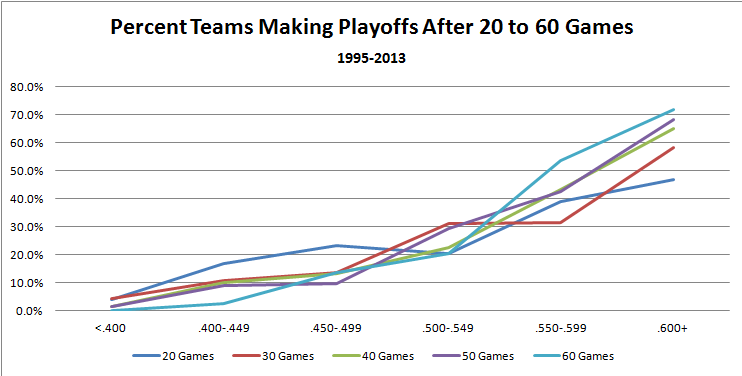 Regardless of the number of games played, be it as few as 20 or as many as 60, teams playing .400 baseball or worse rarely made the playoffs. Teams that did after slow starts include the 2002 Angels (6-14 after 20 games). It can happen -- it just rarely does.

There is a world of difference between probability and actuality -- probability states how often a given event has occurred given explicit criteria vs. the actuality that even long odds can be overcome under the right circumstances. The 2005 Astros famously caught fire after a 15-30 in start to eventually make it to the World Series, and the 2003 Marlins were the eventual World Series champions after firing Jeff Torborg following a 16-22 start and hiring Jack McKeon. Teams can overcome slow starts, but history suggests it isn't easy to do.

What can be predicted for 2014? In the American League, the Yankees, Rangers and A's are all off to decent starts, nothing too surprising, with the possible exception of the Yankees. The Rangers and A's have many games against the Astros (16 and 15, respectively) to fatten their records, and if the Yankees can keep their lineup healthy, they have a chance, but nothing is guaranteed in what appears to be a very competitive AL East. In the National League, Atlanta and Los Angeles are off to strong starts to the surprise of no one, and the mystery will be how the Brewers perform.

It's a fine line between recognizing a team on a hot streak as opposed to a team that is simply good, and that's the distinction the Brewers will be answering as the season progresses. They have excellent players in Ryan Braun, Aramis Ramirez and Jonathan Lucroy, and if their pitching holds up, the odds will be in their favor. No other team in the NL Central is off to a good start, and after this weekend's series will have 15 games left against the Cubs (my prediction -- the Cubs will lose 20 of these games).

With five playoff teams in each league, every game takes on increased significance as the number of wins between the final playoff team and the runner-up grows smaller. This chart depicts team's 60-game record and percent that made the playoffs stratified by number of playoff teams: 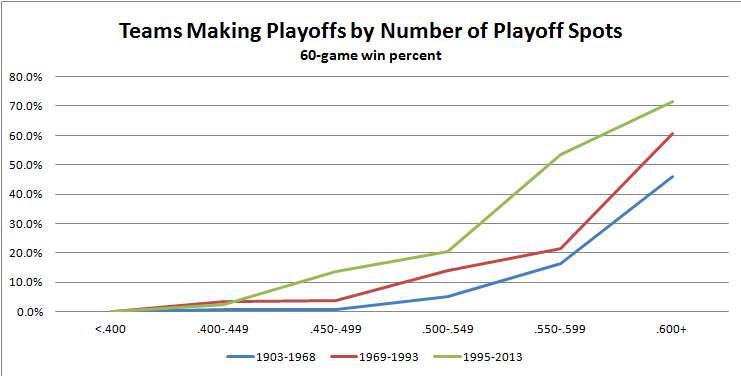 Clearly more playoff slots allows for teams to overcome slow starts, but the overall point remains -- with few exceptions, teams that start slow aren't just shaking off the rust and seeking their natural rhythm, they're often bad teams meeting low expectations. Even teams playing around .500 are just that -- good teams that might be a player or two away from contention, but even that isn't assured. This is the limbo the 2014 White Sox find themselves in --with a 12-13 record through Saturday, are they making improvement on their horrendous 2013 season or still in the midst of a multi-year improvement program? In their case they have too many questions marks -- how will Jose Abreu perform? Will Gordon Beckham fulfill the promise that made him the eighth pick of the 2008 draft? Will Chris Sale be out for 15 days, or more? The trends suggest they are what they are: a .500 team, give or take a couple games.

By the time this is posted on Monday most teams will have played around 25 games. For the most part, the teams on the field are the teams that will continue to be run out every day, since the rash of injuries to pitchers like Patrick Corbin, Kris Medlen, Clayton Kershaw and Matt Moore have already been factored in. There will be teams currently around the .500 mark who will make the playoffs, but it's safe to say enough games have been played to make educated guesses on playoff potential, and that the increased number of playoff slots makes it easier to make these predictions earlier in the season. I state this will a fair degree of certainty -- Cubs fans, wait 'til next year.

Data gathered using the Streaks function of the Baseball-Reference.com Play Index feature. Any mistakes in amalgamating the data are the author's.