Share All sharing options for: Introducing the new Francisco Rodriguez

That is a very basic statement of fact and may or may not be surprising to you. Personally, I think that number sounds low because it feels as if K-Rod has been around baseball for a long time. The Brewers reliever debuted 12 years ago in 2002, doing so at the tender age of 20.

Rodriguez was a star from the get go and between the ages of 22 and 26, he led baseball with 206 saves and set the single-season save record, with 62. He totaled 11.7 WAR, a number bested only by Joe Nathan and Mariano Rivera during that time period. Unfortunately, he has produced only 5.2 WAR in the other eight years of his career and has ranged between very good and rather ordinary, never touching his earlier peak.

Six years removed from his record-setting 2008 season, Rodriguez has gotten off to a remarkably successful start. The right-hander has not allowed a single run in his first 12 innings with 18 strikeouts and only three walks, good for a FIP of 1.03. Looking at the statistics alone it would appear that K-Rod has regained the form that made him a dominant force years ago, but the reality is that he has found a completely different form.

When Rodriguez was playing for the Angels, he used plus velocity to put hitters away. He has been losing ticks off his fastball at an alarming rate in recent years and has bottomed out with an average fastball velocity of 89.5 mph this season, according to FanGraphs' PITCHf/x numbers.

Pitchers are bound to lose velocity over time, but the way that Rodriguez has gone from fireballer to soft tosser so quickly is fairly unusual.  However, the Brewers closer has adapted to the situation with aplomb so far this season, doing so by changing the way he uses his non-fastball offerings. The following graph show K-Rod's pitch usage in terms of curveballs and changeups since 2007: 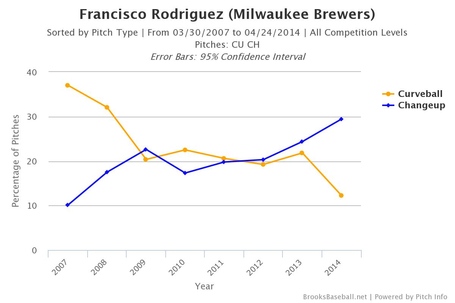 It's apparent that he is moving away from the curveball towards the changeup, which is just as well because his curveball has missed fewer and fewer bats in recent years, while his changeup has taken off in 2014: 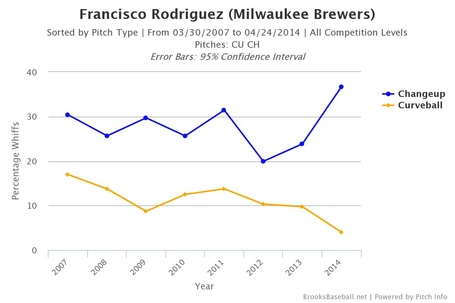 We are talking about a 12 inning sample, so it's too early to say exactly what we are seeing here, but it is clear that Rodriguez is leaning more on his changeup and that it has been more effective than ever. Perhaps one clue might be the way K-Rod is locating the pitch.

The Brooks Baseball zone profile below shows where he has placed his changeups so far this year. Burying the changeup low in the zone and falling out of the zone is definitely a recipe for success for Rodriguez. It remains to be seen if he can keep commanding the pitch this effectively, but if he does, he is likely to continue to excel.

So far this season, Francisco Rodriguez is putting up numbers like the K-Rod of old, but he's not pitching like the K-Rod of old. Robbed of his velocity, the veteran reliever has found a new way to be effective, and if he continues to adjust to his new repertoire there's no reason he can't have a run of sustained success.