CC Sabathia and Andrew Cashner have made some adjustments, producing some interesting results. Can the results continue?

In the wee games of the young 2014 season, pitchers' numbers are put under a microscope, examined, and overreacted to. For example, Jesse Chavez, a previously unknown quantity, has suddenly exploded onto baseball's big stage, and many people are extolling his virtues because of some gaudy numbers. Part of examining these new numbers is looking for reasons why the new numbers are different from the old numbers. So far, CC Sabathia (2.57 xFIP) and Andrew Cashner (2.83 xFIP) are producing some new numbers, so we might as well examine potential causes.

The shiniest new number is their increased strikeout rate. Cashner's strikeout rate has gone from 18.1% to 24.3%, and Sabathia's has gone from 19.3% to 24.8%. Similar old, similar new. Cashner's walk rate is close to the same as before, but Sabathia's walk rate has declined from 7.2% to 4.6%. Naturally, we should probably expect some regression in the walk numbers for Sabathia since he has not faced the requisite number of batters to pay attention. However, we might reasonably expect both pitchers to retain some part of their K% increases, because K% numbers start stabilizing at 70 batters faced. Both pitchers have faced more than that number.

The slightly less shiny number, but still important, is an increase in ground ball rate. Both pitchers have allowed more than 70 balls in play, at which point GB% begins to stabilize. The increased GB% is probably something at which we might raise an eyebrow or two. Since ground balls are most often not home runs, an outcome with which Sabathia in particular struggles, a higher ground ball rate could lead to improved performance.

According to multiple sources, including FanGraphs and Brooks Baseball, both pitchers have increased the usage of their sinkers, partially in exchange for a reduction in four seam fastballs. For Sabathia, this makes sense because he is still safely aboard the velocity reduction train. His four seamer, at this point, is a simple meatball that has gotten crushed. The graph below shows the increase in ISO since 2010 against his four seamer. Given that sinkers are good at getting ground balls and both pitchers are throwing more of them, it's a decent possibility that both players could retain increases in GB%. 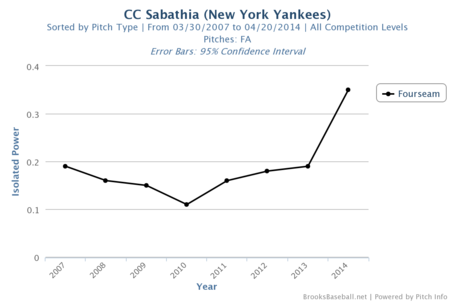 And the strikeouts? For Cashner, the underlying signs are not indicative of a sustainable increase in strikeout rate. The changeup is the only pitch whose whiff rate has increased, but his changeup usage has decreased. His overall swinging strike rate has actually declined from last year. The only indicator of more strikeouts is his increased first strike percentage. Batters are actually swinging less against Cashner, too; if batters adjust their strategy, expecting a first pitch strike and pouncing on it, Cashner might not be ahead in the count as much, due to increased contact. About 75% of Cashner's first pitches so far are either four seam or sinker to both RHH and LHH, and neither pitch is a swing-and-miss offering. It seems unlikely that Cashner will retain a K% increase.

Sabathia's indicators follow a similar pattern. First pitch strikes are up, but batters are swinging less, and his swinging strike rate is about the same as last year. Against RHH, who comprise the vast majority of all batters he faces, Sabathia throws 70% hard stuff on the first pitch. Batters can make a similar adjustment and come hacking on the first pitch.

Both pitchers have simply been ahead in the count more often due to throwing strikes on the first pitch. Once batters adjust, and the pitchers throw fewer first pitch strikes, the strikeout rates will probably come down. At that point, the cat-and-mouse game of adjustments will continue, and we'll have new new numbers to discuss.

Kevin Ruprecht is a Featured Writer for Beyond the Box Score. He also writes at Royal Stats for Everyone. You can follow him on Twitter at @KevinRuprecht.