A resurgent Albert Pujols, kind of

Share All sharing options for: A resurgent Albert Pujols, kind of

Everybody loves Albert Pujols. Well maybe not Cubs fans, but just about everybody else. Pujols has matched incredible performance with exceptional character for well over a decade now and his induction into the Hall of Fame is probably just a formality. They can go ahead and get that plaque ready.

The modern Pujols, as you've probably heard, hasn't meshed with the Pujols of legendary vintage and 2013 was easily his worst season in the majors. He inked a massive contract with the Angles before the 2012 season, had a down year, then tanked even harder last season as he continued to be plagued by a foot injury that limited him to less than 100 games for the first time in his career. Dave Cameron went as far to say that Pujols' current contract with the Angels is the worst in the majors, which might be a bold statement considering what the Halos owe Josh Hamilton. Still, you get the idea: Albert Pujols has been on a serious decline.

What's been fueling that decline? Take a look below as you can see the trends in his strikeout rate, walk rate and weighted runs created-plus (wRC+). 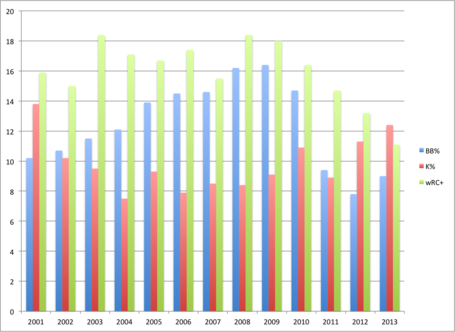 You'll notice the strikeouts have been trending up, the walks trending down and the wRC+ is following a downward slope. There's perhaps some redundancy here as K's and BB's are certainly part of how wRC+ is calculated, but it's clear to see that as the peripherals are trending in a negative direction, so is the overall offensive package.

I think the real question here is why the downward trend? Is he seeing the ball poorly? Has he lost his discipline? Has Albert Pujols turned into a free-swinger? Before answering, take a look at his swing data below: 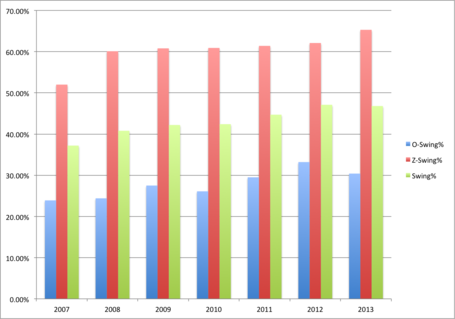 Since 2007, Pujols has slowly started to expand the zone. The blue bars representing his O-Swing% (percentage of pitches swung at outside the strike zone) have climbed nearly 10%, showing his propensity to chase as of late. His Z-Swing% (red bars, percentage of pitches swung at inside the strike zone) have also climbed since 2007. When put together, his Swing % (green bars, percentage of all pitches swung at) has also increased pretty dramatically. Simply put, Pujols is swinging more, which you may have guessed from his decreased walk rate and increased strikeout rate above.

Ok, so he's swinging more, but what happens when he swings? Check out his contact rates and see for yourself. 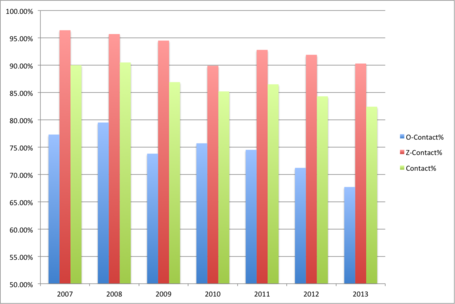 It should come as no surprise that the contact rates have fallen off big time across the board. He's making less contact in the zone (Z-Contact%), less contact out of the zone (O-Contact%) and it all adds up to less total contact (Contact%). Summarizing from above, we have more swings and more misses, which is never a good thing.

But maybe the issue is that he's being pitched to differently. Let's look at what pitchers have been throwing him since 2007. 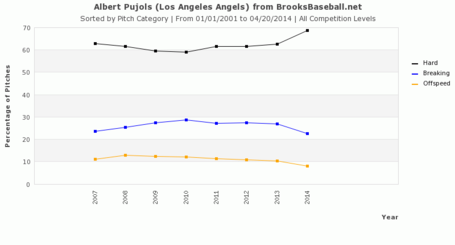 From 2008-2010, when Pujols averaged 8.1 WAR, he saw fewer and fewer hard pitches (fastballs). Pitchers knew that throwing him something hard and relatively straight was a bad idea and tried (but often failed) to keep him off-balance by throwing him a bulk of breaking stuff (sliders, curves). Starting in 2011, however, we've seen a change. The hard stuff has increased and the breaking stuff has decreased from the period prior. Why would pitchers feel more comfortable throwing him the heat when they had backed off of it previously? Quite simply, they don't fear Albert like they did before, and I would guess that it's because his bat had finally started to slow down. To compensate, Albert attempted to swing more, but the more he swung, the less he connected and the more he fell off at the plate.

But this is about a resurgent Albert Pujols, kind of. If you haven't noticed, he's currently running down his 500th career home run (he currently stands at 498) and is doing a decent job of powering the Angels lineup, although he gets some help from guy named after a fish. In a very small sample, the power is back in a big way, although it's not completely sustainable. With that said, Pujols has already almost eclipsed his entire 2013 WAR total in less than 20 games. How is he doing it?

The aforementioned power is the obvious answer, but getting back to some of our earlier indicators, we can see some encouraging changes. He's sporting a nearly identical swing rate as he did in 2013, but how he's achieved it is notable. Pujols is chasing fewer pitches out of the zone (down 2.5%) and swinging at more pitches in the zone (up 1.5%). He continues to make less contact out of the zone than he did in his heyday, but that's fine since he's swinging less out there. He's making more contact in the zone, however, which is encouraging and his success against hard stuff is the best it's been in years, at least so far.

Compare his heat maps between 2013 and 2014 and notice the change he's made, especially off the plate (Pujols is a right-handed batter, so look at the boxes on the right side of the zone). 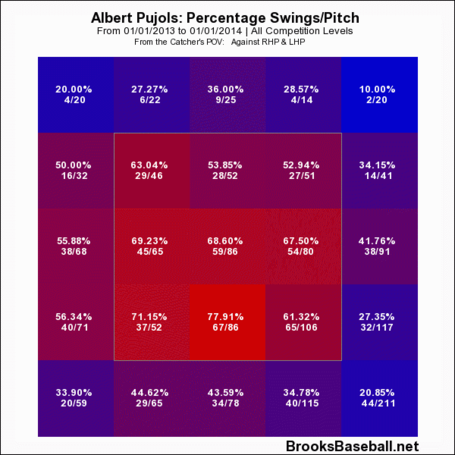 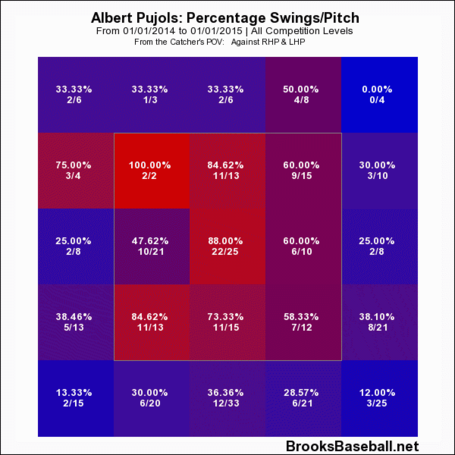 While the sample is really small for 2014, he's chasing fewer pitches off the plate away. With a bat that's slowing, he doesn't have the same coverage as before and we can see that Pujols is adjusting for it, at least so far as we can tell in this young 2014 season. Again, this is highly encouraging but not definite.

The best hitters in the game are the ones that can make adjustments. Albert Pujols today isn't the Albert Pujols of yesteryear, but he is the Albert Pujols that the Angels are stuck with through 2021. For him to remain an effective player, and perhaps ultimately someone who makes a serious run at the all-time home run record, Pujols needed to correct the declining trends noted above. By being more selective at the plate and realizing the player he has become in his older age, he appears to have righted the ship somewhat.

No, he's not going to be 9-win player again, but by understanding his abilities and changing his approach, Pujols can remain productive. Maybe not as productive as his salary might warrant, but that's the Angels' problem. For now, fans should sit back and watch one of the greatest hitters the game has ever seen, and one of baseball's true good guys, run down his 500th home run. Meanwhile, keep an eye on his plate discipline and swing rates to see if a more discerning, selective Albert Pujols can prove to be a more productive Albert Pujols. As a fan of good baseball, I, for one, am not ready to see him fade away, even if he is Cooperstown-bound.

Jeff Wiser is an editor and featured writer at Beyond the Box Score and co-author of Inside the 'Zona, an analytical look at the Arizona Diamondbacks. You can follow him on Twitter @OutfieldGrass24.