Yovani Gallardo had a simultaneously lauded and panned start in Boston on April 6th. He allowed no runs, but got no swinging strikes against one of the most prudent teams at the plate. The start was a catalyst for discussion about Yovani Gallardo, and how exactly he got to this point in his career despite drastic changes in velocity and release point.

Very early Monday morning (or very late Sunday night, if you prefer) a tweet from Gabe Kapler mentioned Yovani Gallardo's performance during the game that day and the possibility that he'll finally put it together. Mitchel Lichtman (often referred to as MGL) responded to Gallardo's post and a long discussion began discussing Gallardo's career to date, his performance against the Red Sox, and pitcher aging curves. Lichtman's initial response that piqued my interest in the conversation:

Lichtman went on to make several other points that are both relevant and interesting. He mentioned that there is a strong relationship between faltering performance with dropping velocity. He also went on to mention that pitchers start losing velocity almost immediately, and that it gets worse as they age. This, he explains, is why pitcher aging curves don't have an up slope.

The purpose of this post is not to research and provide hard data to support or refute Lichtman's claims, but rather to use them as context for understanding the ups and downs of Yovani Gallardo's career. Getting back to Kapler's original point, it's important to note how Gallardo performed in his start versus the Red Sox.

Gallardo threw 6 and 2/3 innings against the reigning World Series champs, allowing 7 hits but no runs. He also struck out 3 Red Sox hitters while walking none. That pitching line is very impressive, but PITCHf/x data from BrooksBaseball shows that he did not get a swinging strike in the game, which could be troubling.

Kapler's original tweet mentioned this season could be the one that Gallardo finally puts it together. in Gallardo's defense, he's only posted a below league average FIP- once in his career, and that was last season. Even then, his FIP- was just 102, or 2% worse than league average. Over his career his FIP- is 91, so he's 9% better than average over the seven seasons he's been in the majors. Gallardo doesn't exactly need to "put it together", as he's had a good career to date, though he did disappoint last season.

What Gallardo has done since becoming a full time big league pitcher is see his velocity change significantly. The graph below shows Gallardo's velocity over time, and hints at Lichtman's original response to Kapler. 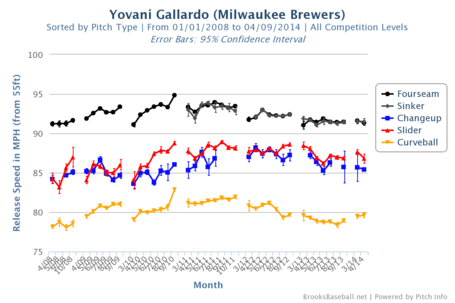 Gallardo is throwing his fastball (and sinker) slower than he ever has since his rookie season in 2008. In 2014, it's falling even further, albeit through just two starts. This is obviously not enough of a sample to make any definitive claims, but something to note moving forward this season.

One thing Kapler says is that Gallardo's heavy fastball reminded him of Curt Schilling. Generally speaking, pitchers with heavy fastballs are ones who get a lot of ground balls, something Schilling wasn't really known for later in his career. So far this season, Gallardo has shown off a heavy fastball, as he's getting twice as many ground balls as he is fly balls. Granted, the caveats here are the small sample size, and the fact that his ground ball rate would be a career high if he maintained it and his fly ball rate would be a career low.

Gallardo's velocity has gone up about 2 mph during his career, and it's also fallen back down to where it was when he first started his career. He also went from a four pitch pitcher who threw his fastball and curve 88% of the time, to a five pitch pitcher that uses four of those five pitches at least 17% of the time.

Below are two screenshots from MLB.com videos of Gallardo. The one on the left is from an April start from 2013 against the San Diego Padres; the one on the right is from Sunday's start against Boston. The camera angles are different here, but it seems that Gallardo was delivering the ball from a more upright position in early 2013, compared to Sunday's start against the Red Sox. As Doug Thorburn notes in this excellent analysis of Ubaldo Jimenez, a pitcher's posture when his plant foot lands is important for the rest of his mechanics. The difference for Gallardo isn't nearly as significant as it is for Jimenez, but it is a possible cause for the change in Gallardo's velocity and performance from year to year.

I can't speak to how heavy Gallardo's fastball felt in either 2008 or last Sunday's start. Only an MLB player like Kapler who has stood in the batter's box against Gallardo can attest to something like that. What I do know, based on the data we have, is that Gallardo has been very successful over his career despite significant changes in velocity, repertoire, and release point. I also know that the margin for error with a 90-91 mph fastball is smaller than it is for a 92-93 mph fastball. Gallardo may be adjusting well enough to be competitive despite a loss of velocity, but he's undoubtedly a worse pitcher with less velocity on his fastball.

If Yovani Gallardo wants to have a strong bounce-back season in 2014, he'll need to keep doing all of the things he's done in his first two outings this season—get more ground balls, walk fewer batters, and give up less home runs. It's unlikely that all of those things (among others) will remain in Gallardo's favor moving forward and that smaller margin for error will catch up to him.

Beyond the Box Score's own Scott Lindholm said it best a few weeks ago in his analysis of pitcher aging curves. Scott said:

It's a new day with pitchers--pitch hard, flame out young and leave a pretty fWAR. Those who beat the odds are amongst the best in history. As the aging charts show, the difference between solid careers and Hall of Fame ones are the pitchers that can defy Father Time from around 28 on and still deliver quality pitching.

2014 just happens to be Yovani Gallardo's age 28 season. He's already thrown over 1,100 innings in his career, so this could be the point where we find out if Gallardo is going to put it all together and become an elite starter, or if he's just another solid starting pitcher.

A special thanks to Gabe Kapler, Mitchel Lichtman, and Scott Lindholm for inspiration for this post.