The Astros are going to be pretty terrible this year, but they have a lot to look forward to.

In preparation for this year’s team previews, each writer was assigned a rival of his or her favorite team. This task may have been difficult for the powers that be when it comes to me, as I do not follow any team extremely closely. I may say my allegiances are with the Rays and Brewers, but I’m not a true fan of either team. However, if the entire point of this exercise was to make someone write about a team that they despise, then…success. The Astros make me angry.

It isn’t their daily losing or league-switching or Astrodome-abandoning ways that makes me feel this way. I understand that being a bad team while rebuilding is a perfectly sound strategy, that the league forced them into the AL, and that Minute Maid is probably an infinitely better place to watch a game than the old Eighth Wonder. Those aren’t the things that I hate about them. No, it’s their obvious personal vendetta against the online advanced statistical baseball community, of which we are all a part. Many may rise and applaud the Astros for creating an all-inclusive database of every piece of baseball information in existence, creating a user-friendly interface, putting it online, updating it daily, and having the wherewithal to name it "Ground Control." I say, "Give me the URL and password access!" Still others may say, "Bravo!" for hiring Mike Fast, Kevin Goldstein, Colin Wyers, and others. I say, "Give it back!" They are stealing all of our stuff and keeping it to themselves. Jerks. I hope they lose 120 games this year.

All kidding aside, the Astros have managed to place themselves in a situation of hope. They and their fans know that they are rebuilding. They are being transparent with that. But as is not always the case in a rebuilding situation, there is a sense that they have the proper people in place to make the correct personnel decisions that will lead to future sustained success. So this isn’t your typical team preview. The focus isn’t on what players need to break out or what positions need to be solidified to lead to a playoff berth, that’s out of the question. Instead, the focus is on what needs to improve for the Astros to become a force in the future AL West.

2013 was the Astros' first year in the American League, and they did not make a good first impression. With 111 losses, the Astros became the AL doormat. But of course, we all knew they were going to be terrible. Again, this isn’t about their wins and losses, it’s about their ability to create sustainable success. So what steps did the franchise take last year?

The accomplishments of the Astros are allocated in Altuves. Well maybe not, but the diminutive Jose Altuve is a keystone* player at the major league level. Unfortunately, he suffered from a bit* of regression last year, after an apparent breakout in 2012. His wRC+ dropped from 103 to 85, leaving his fWAR just short* of 1.5. His defense took a small* step forward, but that could be the result of slightly* better positioning, as his range was the biggest improvement in his numbers.

*All of the puns in the preceding paragraph are definitely intended.

Many of the projection systems expect Altuve to land somewhere between 2012 and 2013 in terms of offensive production. As long as he can continue to make the needed adjustments, he can be a solid-average player for the team over the next few years.

Another huge step for the Astros was the reemergence of catcher and former prospect Jason Castro. He lost all of 2011 and much of 2012 due to a knee injury, but returned in 2013 with a vengeance, posting a 130 wRC+ and a 4.3 fWAR. However, these numbers come with an asterisk: he showed power that he never showed in the minor leagues. If he indeed can continue posting .200-plus ISOs with average defense, then Castro is absolutely a perennial all-star. With regression likely though, we should temper our expectations of him.

None of Carlos Correa, George Springer, or Jonathan Singleton made it to the major league level last year, but each project to fill positions of need in the organization with an extremely high amount of production.

A stable of position players means nothing without an equally impressive pitching rotation. The Astros don’t have quite the high level of young pitchers as they do position players, but the well is not completely dry. 2013 1st overall draft pick Mark Appel had a solid professional debut and is expected to rise to the top of the Astros rotation. Behind him is Jarred Cosart, who underwhelmed in the majors in 2013 with a 4.35 FIP, but has the ceiling of a 3rd starter. In the next tier is a group of pitchers with either lower ceilings or higher risk (or both): Mike Foltynewicz, Vincent Velasquez, Lance McCullers, Brad Peacock, and Brett Oberholtzer.

The biggest on-field splash the Astros made this offseason was undoubtedly trading for Dexter Fowler. It was an interesting move, since the team has a centerfielder nearly ready to step into the starting role this year, in George Springer. Perhaps this signing will lead them to keeping Springer in the minor leagues for much of the year until they can find a good trade partner to take Fowler. Perhaps it was a low-cost move to provide a well-known player for the fans to watch. Whatever the reason, unless the Astros don’t believe Springer can handle center, it seems that Fowler won’t be prowling the middle of the field for them for long.

Many of their other moves this offseason provided pitching or minor league depth. It appears the Astros current plan is to allow their young players a chance to prove what type of value they are capable of providing at the major league level.

The Astros have a veritable open cluster of young stars that will be fun to watch as they mature, including the aforementioned Altuve, Castro, and Cosart. Each of these must be watched carefully to see if they actually reach their realistic ceiling. However, Springer is the most intriguing of all of them. His combination of speed and power makes many a baseball-lover drool, but his high strikeout rate makes just as many people skeptical. Thankfully, I’ve done the work and we now know that his high strikeout rate isn’t as big of a problem, thanks to his high walk rate and power. 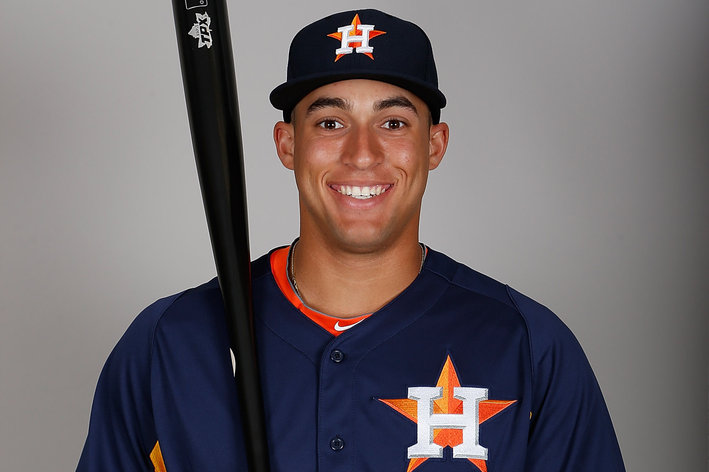 CRPerry13 talks about George Springer's strikeout and walk rates and how they might translate to the major leagues.

All of those swings and misses may drop his ceiling from MVP to All-Star, but he certainly is capable of putting up some great seasons. Springer will be interesting to watch for a variety of reasons, but mostly how he responds to major league pitching. Can he make enough contact to be a starter? Will his power play? Can he handle center field? How successful can he be on the bases? These are still current uncertainties about the player. His ability to perform in each of them is key to the Astros’ future.

Astros By The Numbers

3 – That’s the number of consecutive first overall draft picks for the Astros, including this year’s. So far, these picks have netted Correa and Appel, with a likely selection of pitcher Carlos Rodon this time around. Obviously, the first overall selection is not the only place to find high quality players, but it is certainly a great place to start. If the Astros are able to develop these players into their full potential, they will have successfully re-built their way to a power-hitting shortstop and a dynamite one-two punch in the starting rotation.

From a team wins perspective, the Astros 2014 looks bleak. They are projected to lose more than 100 games and take last place in the entire American League for a second year in a row. But all is not lost! This will be yet another year of growth and preparation for the future good Astros teams. By the end of the year, Springer and Singleton should be in place, with Correa and Appel well on their way to the majors.

With a future core of Correa, Springer, Altuve, Castro, Singleton, Appel, and Cosart, along with other minor league players ready to fill in the gaps, and a smart front office capable of fitting everything together, the Astros future is very bright.