Mike Trout will make the Angels interesting from start to finish, but their starting pitching will determine their fortunes.

The Los Angeles Angels of Anaheim have been quite the disappointment over the past couple of years. We all know the story — committing to overpaid, washed up free agents like Albert Pujols and Josh Hamilton has certainly set the team back. Not even Mike Trout and his super powers could save this team in 2012 and 2013. In 2002, the Angels found success with the "small ball" effect. Scrap players like David Eckstein, Scott Spiezio, and Adam Kennedy are not necessarily the blueprint for success by any stretch of the imagination; however, in 2002 the Angels were able to plug these guys in and count on them to get hits and advance runners on base to ultimately win the World Series. Over 10 years later, the Angels have felt the need to distance themselves from that strategy and have instead elected to sign marquee free agents on the wrong side of the aging curve. With the exception of Mike Trout, there seems to be very little going right for this team, so we will analyze last year’s season and the most recent offseason to give an accurate projection for what you should expect in 2014.

The 2013 season for the Angels was disappointing for both their pitching and offense. While past Angels teams were exceptional at getting runners on base and advancing these runners, this did not seem to be the case in 2013. I took all of the 2013 event data (courtesy of Retrosheet) and computed all of the total transitions from a given initial state to a new state for the Angels. I really wanted to see how the Angels batters did in comparison to the other teams with runners on base and 2 outs. For example, when the Angels had a runner on first base and two outs, the following batter made an out 70.1% of the time. The 2013 league average in this situation was 62.5%, so just from this, we can see the Angels struggled with runners on base. For the sake of keeping this reflection of the Angels 2013 season as concise as possible, you can take me at my word that their other transitions with runners on base were also considerably below average, which played a key role in their failure to score runs and ultimately lose games.

The Angels trade Mark Trumbo, A.J. Schugel, and a player to be named later to acquire Tyler Skaggs and Hector Santiago.

After the 2013 season, the Angels knew they had to improve their starting pitching rotation, so will the acquisitions of Tyler Skaggs and Hector Santiago make a significant impact for the Angels in 2014? Skaggs is entering his first full season with the Angels as a one of the top left handed pitching prospects in the game today; however, the moving from the NL to the AL does not appear to benefit his performance. I simulated Tyler Skaggs 2013 season in the hypothetical situation that he pitched 150 innings and calculated his WAR for his performance on both the Diamondbacks and the Angels, respectfully. The results yielded a 1 WAR for Skaggs with the Diamondbacks versus a 0.8 WAR with the Angels. At the surface, it seems that the transition from the NL to the AL will reflect negatively on Skaggs' performance, but the incredibly small sample size (38.2 IP) makes his forecast much harder to predict. Ultimately, Skaggs’ potential is unknown to this point, but it will be exciting to watch how he performs in his first full season.

Hector Santiago is a different case from Skaggs, given he comes from the Chicago White Sox and pitching in one of the smallest ballparks in the American League. Attempting to project Santiago’s performance, I simulated his 2013 performance with a neutral ballpark effect and concluded his ballpark neutral WAR of 1.6. Given Santiago’s actual 1.3 WAR, there's a reasonable amount of confidence that Santiago will benefit from moving to the Angels because he will be in a more pitcher friendly ballpark. Will it be enough to make up for the rest of the rotation? I guess that is why they play the games.

Even though he is entering his age 41 season, the acquisition of Raul Ibanez could prove to be an astute one. Don’t expect him to eclipse his 29 total HR mark of last season, but his bat in the middle of the Angels lineup should benefit the Angels offensive production. As previously mentioned, the Angels have struggled mightily with advancing runners on base. Raul Ibanez is a career .291 hitter with a runner on first base and two outs, so I would expect the Angels to improve their ability to advance runners on base.

It’s hard to choose a player to watch on the Angels that isn’t Mike Trout. Look for Kole Calhoun to make an immediate impact in his first full season in the league. After registering 222 PA in 2013, Calhoun posted a 0.351 wOBA and a relatively low strikeout percentage of 18.5%. Calhoun is starting the year as the Angels right fielder and will most likely be the leadoff hitter in the lineup. Batting leadoff in the Angels lineup, Calhoun looks to be a pretty solid player (.407 average, .488 OBP, 222 tOPS+); however, when he bats fourth, there is a drastic increase in his offensive performance (.500 average, 0.583 OBP, 263 tOPS+). Cognizant of small sample sizes given his 222 plate appearances last season, the upward trend is promising for the upcoming season. In the unfortunate event that either Trout, Hamilton, or Pujols get injured for a period of time this season, look for Calhoun to actualize his potential if he is given the opportunity to bat in the middle of the lineup. Therefore, if one or more of the Angels "big three" have a stint on the disabled list this season, don't rule the team out of contention; Calhoun is a sleeper that deserves more attention than he has been getting to date.

The 2014 season for the Angels could witness Calhoun breaking out as an everyday productive player with value in the middle of the lineup. After simulating his 2014 season (assuming 500 plate appearances), I project Calhoun to have a 2.7 WAR while Steamer, ZIPS, and Oliver project him at a WAR of 2.4, 2.0, and 3.3 respectfully; that being said, any of these projections for Calhoun’s 2014 season would be satisfactory for his development. Look for Kole Calhoun this season as the player to watch on the Angels (that is, if anyone else matters besides Trout).

Angels By The Numbers

I recently performed some analysis of ball and strike effects and the role it plays in the success of teams and the efficiency of their respective pitchers. After compiling all of the 2013 event data, I developed a table consisting of the run values for each of the 12 different possible pitch counts across MLB. The figure is presented below: 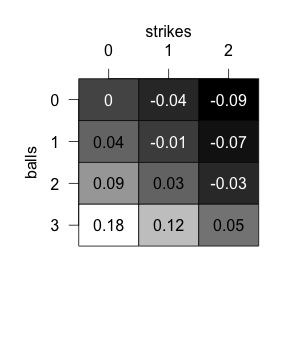 One example to emphasize from this figure is that an 0-2 pitch count corresponds to a -0.09 run value. Therefore, batters are at a significant disadvantage when the count is zero balls and two strikes. Hence, the notion of a "hitter’s count" versus a "pitcher’s count" is objectively true. Pitchers with higher rates of 0-2 counts are generally better; in 2013, 9 of the top 11 teams in 0-2% (0-2 counts seen per PA) made the playoffs. Given this, we can see that there might be some correlation between 0-2% and winning teams. The 2013 Angels were actually the 5th worst team in the league with a 22.9 0-2%, so there is much room for improvement for the Angels pitching going into 2014.

Looking at the 2013 Angels starting rotation, the 0-2% for Jered Weaver, C.J. Wilson, Tommy Hanson, Jerome Williams, Garrett Richards, and Joe Blanton were 22.2, 20.9, 22.5, 20.9, and 22.3, respectively. Given these relatively low percentages compared to the league average 24.1%, the Angels need to improve on their pitching efficiency. An initial conclusion from this analysis is the Angels starting pitching struggles at throwing strikes, and directly leads to pitchers being at a disadvantage in pitch count. Although the lack of offensive production from key players like Pujols and Hamilton in recent years has been at the forefront of the Angels struggles, their starting rotation was just as complicit for the team’s inability to reach expectations.

With the majority of the starting rotation returning in 2014, there does not seem to be much room for improvement in this department; however, the addition of Hector Santiago should reflect positively on the pitching staff given his 2013 25.4 0-2%, which was above league average. There is more research to be conducted regarding how predictive the 0-2% results will be in 2014, but since 2011 the 0-2% has oscillated between 23% and 24.1%, so there is little reason to suspect the 2014 numbers will deviate far from the average.

The starting pitching of the 2014 Angels has significant room for improvement, starting with pitching more efficiently by allowing themselves to pitch in more pitchers counts. If they can pitch more effectively, we will see considerable improvement from the team as a whole this upcoming season.

What is the fate for this team in 2014? Ultimately, the team’s success or failure will be a result of their starting pitching effectiveness. If the Angels batters can remain healthy, then there shouldn't be a problem with their offensive production. New comers like David Freese and Raul Ibanez should benefit tremendously in the 2014 Angels lineup; however, it might not be enough to propel this team into the playoffs. If the Angels are going to contend in the AL West, they are going to need Mike Trout to produce another season with a WAR over 10 and many in the SABR community who believe he is going to regress a little bit closer to the league mean than he has shown the past two seasons.

Fortunately for the Angels, playing in the same division as the Houston Astros saves them the embarrassment of coming in last place. Nevertheless, the most likely expectation for the 2014 Angels in the AL West would be third place or maybe even second place if the team can keep injuries to a minimum. Expect the Angels to be one of the most entertaining teams to follow this season mostly because of their uncertainty (and unpredictability).

Mike Nestel is a contributor to Beyond The Box Score.