A preview of the 2014 Atlanta Braves — reigning NL East champions.

Atlanta had quietly become a popular top-five pick during early offseason evaluation — compiling the league's third-most wins over the past five years (456, behind Texas: 457 & New York: 475). Why quietly? Because early playoff exits three of the past four years makes great regular season performance little consolation for an annual contender. Midway through camp the club appeared primed to hit full stride, arriving in Lake Buena Vista paid and organizationally deep; however, a sudden onslaught of injury to the club's starting rotation has raised some uncertainty of previous lofty projections. Despite some doubt, offseason moves have Atlanta locked in for a season shaping up to be a two-horse race in arguably baseball's most shallow division. Before recapping the recently concluded offseason and recommending the club's "one to watch," we look back at a handful of dominant performances and one disconcerting conclusion from this past year. 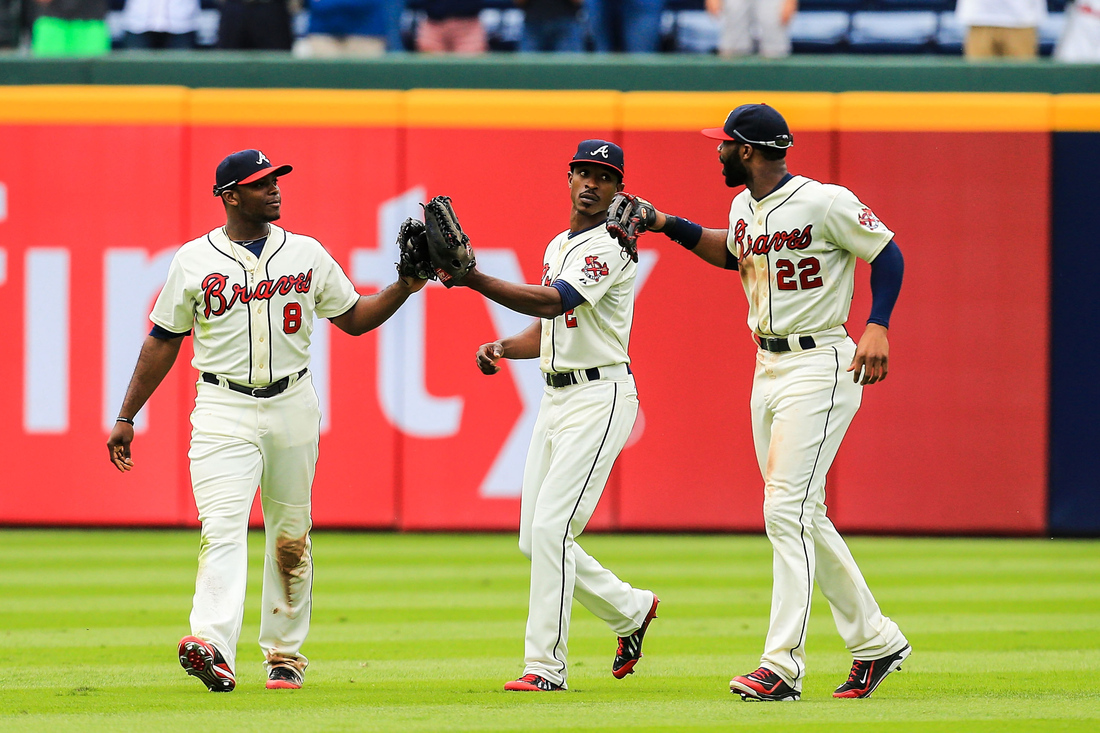 96 wins — one less than the inevitable World Champions, but certainly enough to recapture the NL East crown. While Atlanta cruised through the division, ultimately leaving second-place Washington ten games back, several players made headline performances. Craig Kimbrel exploited opposing hitters during his first arbitration platform year: the closer led the league with 50 saves (tied with Baltimore's Jim Johnson), finished with a top-three ERA and xFIP, and a top-five tERA and SIERA amongst amongst relievers. Andrelton Simmons posted an all-time single season record 41 DRS at short while coasting to his first, presumably of many, Gold Glove awards.

While Chris Johnson nearly won the NL batting title, hitting .321, the club as a whole was not particularly stout offensively, collectively batting under .250 (20th in baseball). The club's passable offensive production was countered by a rotation getting deep into games, eating the third-most innings as a staff and touting a top-six ERA, FIP and xFIP. Making matters worse for those able to finally chase Atlanta starters, newly-extended Fredi Gonzalez handed the ball to the game's best bullpen. Atlanta relievers backed an October run cut short by a first round matchup against an electric Dodgers club. Despite taking Game 2 at home, the series would end in four after losses in both games started by eventual Cy Young award winner Clayton Kershaw.

Medlen & Beachy out, Santana in 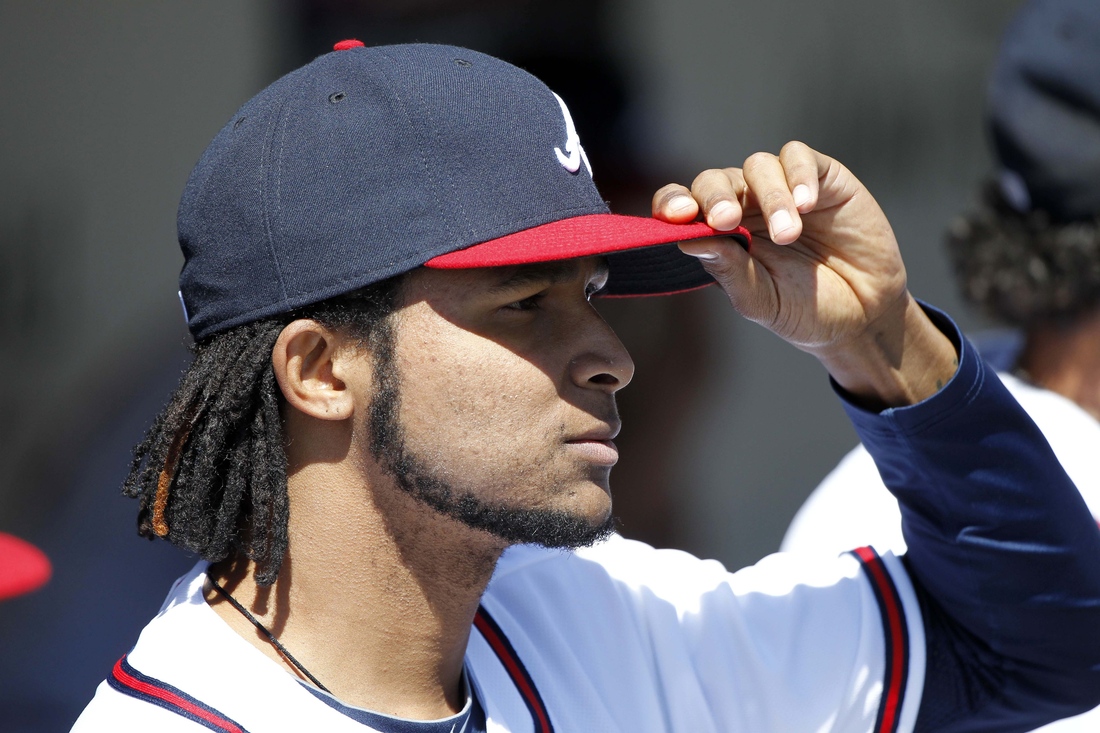 When the first draft of this preview was written late last month, Atlanta's rotation was nearly set in stone — with Mike Minor, Kris Medlen, Julio Teheran and Brandon Beachy slotted in as the club's top-four, leaving Alex Wood and Freddy Garcia to duel for regular starts on the back end. However, the loss of both Medlen and Beachy (combined 227 IP last year) to their second Tommy John procedures in the past four years, and with Minor projected to start the year on the DL with shoulder soreness, the club was left with an unprecedented need for a healthy arm. Fortunately, right-hander Ervin Santana remained fruitless in his pursuit of a multi-year deal since turning down Kansas City's qualifying offer in November. Although the signing (one-year, $14.1M) cost Atlanta their first round draft pick this June, the club's need for starting pitching outweighed the loss of the 26th overall pick (and they will pick at #32 as compensation for losing Brian McCann to New York). Santana has pitched exclusively in the American League over the first nine years of his career, and is coming off a 3.24 ERA (4.53 tERA) season with Kansas City.

Doumit in, McCann out

The loss of McCann in free agency to New York (5 years/$85 million) is difficult to quantify. McCann has lagged defensively for the past five years (-13 DRS, -1 rSB), but despite bringing a plus-bat to the lineup the club won't be at substantial loss offensively between Evan Gattis and Ryan Doumit (acquired from Minnesota) sharing time in replacement. All three are the same cut of hitter, and while McCann gets on base more than the average, Doumit totes a career .332 wOBA and Gattis projects nearly 30 long balls should he catch a majority of the club's games. The bigger loss is less quantifiable — McCann has been the club's primary catcher for the past eight years. While Gattis is entering his fifth year in the organization, the relationship between McCann and Atlanta's staff was not unlike the well-documented relationship between Yadier Molina and his staff in St. Louis — his intimate knowledge of each pitcher understatedly responsible for the club's collective perennial pitching successes. Despite the loss, with Doumit available to catch, play first, or a corner outfield spot on any given night, his added flexibility to the lineup on both sides of the ball provides much needed bench depth. 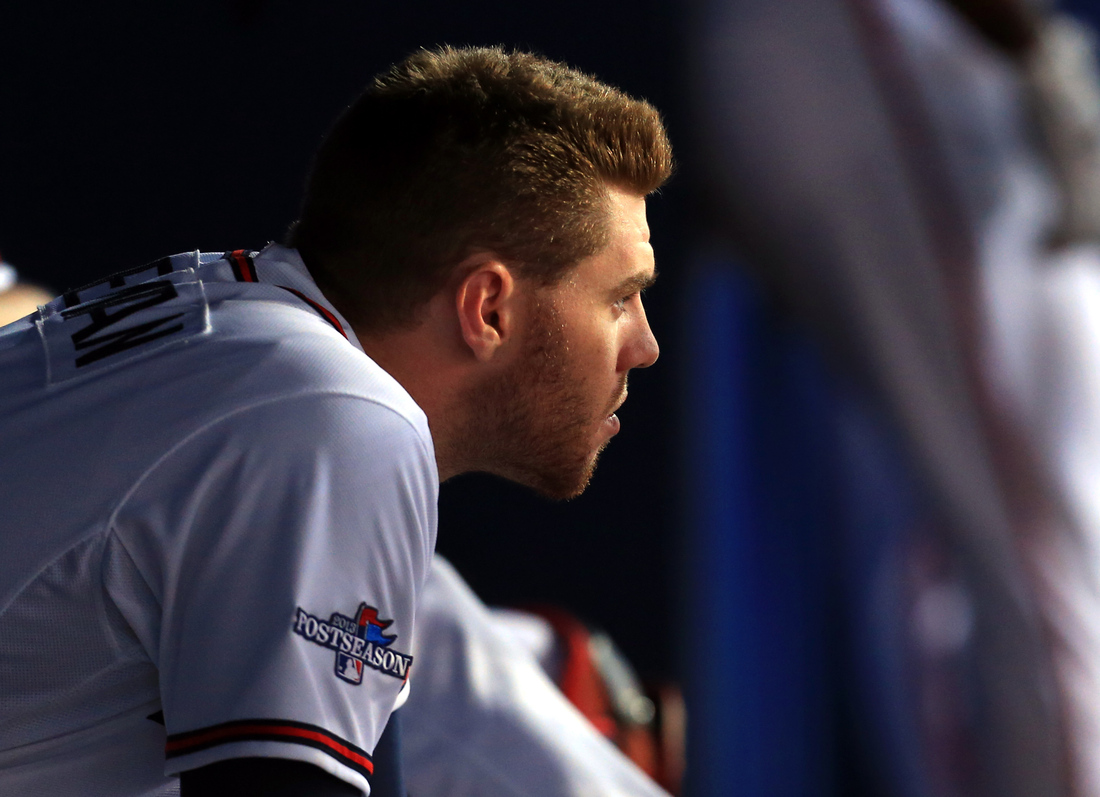 Atlanta enters the season content, because as previously mentioned, this year's club enters the season paid. First base mainstay Freddie Freeman enters his fourth full year with the club, and Atlanta ensured their offensive leader's (RBI, wOBA, wRC+ and WAR) bypass of the arbitration process. The eight-year/$135 million deal gives Atlanta club control over their most reliable bat through 2021.

Also receiving extensions were Andrelton Simmons and Jason Heyward, as Atlanta continued its trend of buying out young players arbitration years while only guaranteeing money through definitive productive years of age (see Teheran, Kimbrel). Simmons, who signed for seven years, $58 million in late February, joined Heyward who received a more modest two-year, $13.3 million extension earlier in the month in order to avoid arbitration — the 24-year-old filed for $5.5 million, while Atlanta filed at $5.2 million.

The player to watch for Atlanta this year is B.J. Upton, who coming off a .184/.268/.375 season has retooled his swing and looks to rebound offensively.

"The center fielder has junked a lot of the moving parts he had in last year's swing, including a foot-tap timing mechanism, pronounced front leg lift, and excessive head and bat movement." —David O'Brien, The Atlanta Journal-Constitution

Braves By The Numbers

Atlanta relievers had a league-best 3.13 FIP this past year. However, the league's most dominant pen several years running does face changes to begin the year as several key pieces have been moved or will begin the year on the DL. Despite being anchored by Kimbrel, Atlanta will continue to be without lefty reliever Jonny Venters who underwent Tommy John surgery in May of this past year. While he does project to return in some capacity around mid-season, obvious question marks remain regarding what he has left in his arm after his second round of the procedure. The enduring absence of Venters leaves only one left-hander, 24-year-old Luis Avilan, who had a tremendous year in 2013 — posting a 1.52 ERA (3.28/4.02 FIP, xFIP) and stranding over 83% of base runners. The group's other lefty loss, Eric O'Flaherty, joined Oakland in free agency. The loss presents two primary questions: will having only one left-hander present significant matchup deficiencies until Venters is able to return? Will a rehashed 7th/8th inning setup combo be able to sustain leads, allowing Kimbrel to enter as many save situations as in years past?

FanGraphs has forecasted a 82-80 season for Atlanta — falling seven games back from Washington who they see running away with the NL East. While the club faces substantial rotation issues despite the signing of Santana, a move will probably need to be made at or before the deadline, and the offense will need to drastically improve in order to support the hampered staff. While the club's success will seemingly turn upon getting relievers the ball with a lead, the division will ultimately be a two-team race down the stretch — my take: both teams make the playoffs with the expanded wild card system entering its third year.