Is Jeff Samardzija vulnerable in certain parts of the strike zone? Data from Brooks Baseball gives some clues.

The Cubs begin the 2014 season in one week with Jeff Samardzija as their Opening Day starter. There are numerous rumors he'll be traded, and as younger Cubs like Javier Baez, Kris Bryant, Albert Almora and Jorge Soler make their transitions to the big leagues, the discussion of Samardzija's future with the Cubs will be ongoing.

Samardzija has been a starter since 2012 and has delivered value regardless of his underwhelming 17-26 record, throwing 200+ innings with 200+ strikeouts in 2013. FanGraphs calculates him as delivering over $13 million in value in both 2012 and 2013, even with a FIP that was just above average due to his relatively high number of walks and home runs.

I was listening to 670 The Score in Chicago on Thursday, March 20th and heard this discussion on the Boers and Bernstein Show between Dan Bernstein and substitute host (and Chicago Tribune columnist) Steve Rosenbloom (it begins at the 30:27 mark of the podcast). Dan said:

I talked to a coach from another major league team about Samardzija . . . and he said "Our book on him is that if you’re patient and you pick your spot, that with runners on base we know at some point in the game one of our power hitters is going to get a fastball up that he can drive . . . Wait for the fastball up, because he’s going to give it to you."

Does Samardzija have a weak spot, and can it be exploited in later innings? Split data from Baseball-Reference.com shows Samardzija's performance by inning in 2012 and 2013:

This gives credence to Dan's statement as Samardzija's ERA increased markedly in innings 4-6. This is typical for most pitchers due to fatigue, hitters getting a better feel and other factors, but Samardzija displayed this tendency to a greater degree than other similar pitchers:

The first part of Dan's statement, that Samardzija gives up more runs as the game reaches the middle innings, appears to be true, but what about the second part--is Samardzija vulnerable when he pitches up in the strike zone? This chart from Brooks Baseball shows Samardzija's pitch location in 2012-2013: 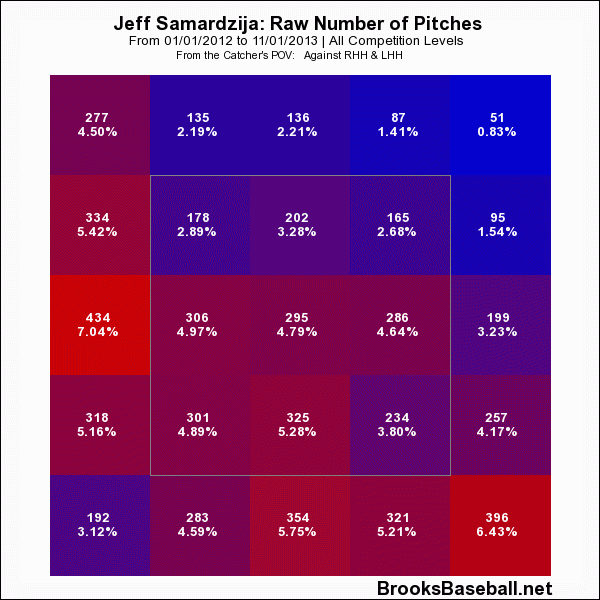 Nothing too dramatic, and it shows Samardzija isn't locked into any one part of the strike zone. This next chart gets to the heart of Dan's comment and shows batting average by zone: 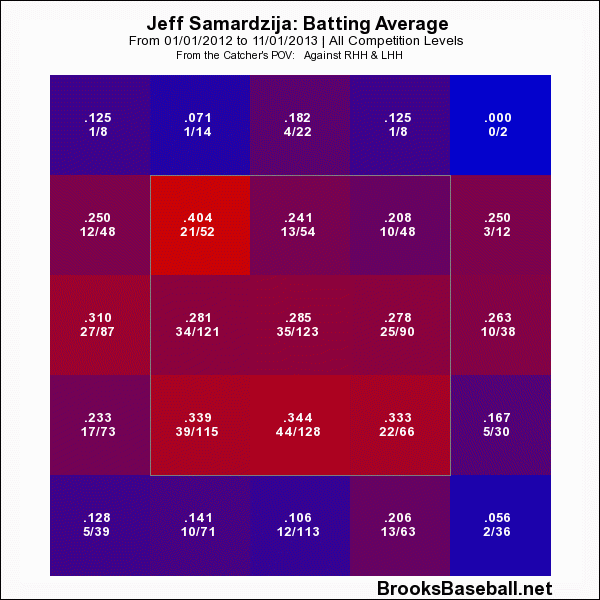 These are small sample sizes but suggests the possibility exists that pitches can get away from Samardzija up in the zone. Taken as a whole, it shows Samardzija works effectively in the lower part of the strike zone, but hitters are able to capitalize on pitches up in the zone. 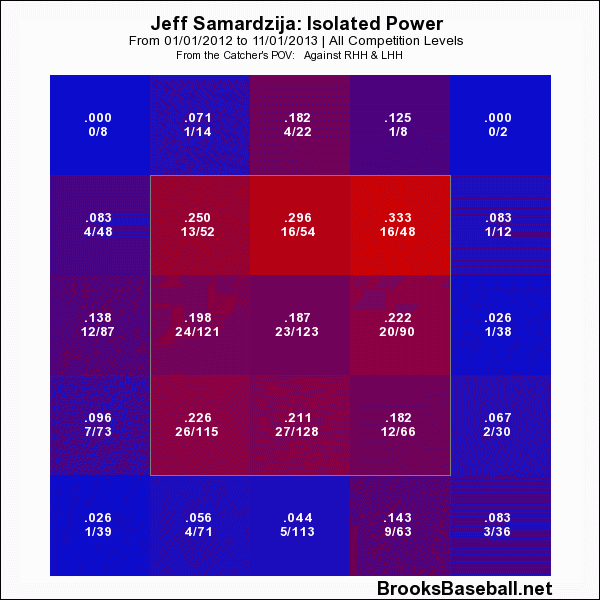 If Samardzija wants to be treated as a #1 starter, it's fair to make comparisons to other top pitchers--all average and isolated power links go to the appropriate Brooks Baseball chart for each pitcher in 2012-2013:

Whether Samardzija is in the same class as these pitchers is subject to debate. I categorically say no, but he's looking to be paid and treated like a #1 starter. He might be better-suited to a pitcher's park like Seattle or San Diego where his strikeouts could make him extremely dominant and his tendency toward pitches up in the zone wouldn't have as much of a negative impact--pitching high in the strike zone is an occupational hazard when half the games are at Wrigley Field.

If Samardzija can cut down on the walks and home runs he can be a valuable asset to any team, but the coach who made the quote to Dan Bernstein was spot-on--there are times in the middle of games when Samardzija loses his concentration and misses up in the strike zone, and hitters capitalize on those mistakes. The questions for every general manager looking at him (there were reports 11 teams scouted Samardzija during the spring) are whether numbers shown in these charts are real and not just matters of sample size and if they're fixable. Samardzija will always have value as an high inning, high strikeout pitcher--he'll add even more if he can reduce the mistakes up in the strike zone.

All data from Baseball-Reference.com and FanGraphs. Images used with permission of Dan Brooks at Brooks Baseball.