The curious hitting of Didi Gregorius

Didi Gregorius struggled against left-handed pitchers last year, but not in the way you would expect.

Share All sharing options for: The curious hitting of Didi Gregorius

As trade rumors swirl around Diamondbacks shortstop Didi Gregorius, fans of potential landing spots, such as the Mets, are scurrying to find out what they can about the 24-year-old. Upon my own examination, I found an interesting anomaly in his performance against left-handed pitching. Let's take a look at what I noticed, and see if it means anything.

Looking at Didi Gregorius' splits, it is obvious to see that he doesn't hit left-handed pitching. At least, not yet. He is 24 years old, having only played in 111 major league games, so as a left-handed batter, early struggles against southpaws can almost be expected. But there is something unexpected in the type of pitchers who give Gregorius trouble.

Last season, against left-handed pitching, Didi hit .200/.267/.245. Quite simply, terrible. Especially compared to his very respectable .275/.359/.429 against righties. It is when you look at his splits against starters versus relievers, though, when things get interesting. Against left-handed starters, the young shortstop hit .261/.354/.333. So, wait. He hit sixty-one points higher against left-handed starters than lefties as a whole? Yes, he did. In fact, he was actually slightly better against southpaw starters than right-handed ones. He hit for more power against right-handers - all seven of his home runs - but otherwise he only hit .250/.326/.382. If managers look at Gregorius and think about platooning him against lefties, perhaps they should think again.

So the question becomes, how could a player hit seventy-five points worse against lefties last year, while hitting sixty-one points higher against such pitchers as starters? The only explanation: he must have had absolutely no success against left-handed relievers.

Baseball-Reference categorizes pitchers into three different types: power, pitchers who are in the top third of the league in strikeouts plus walks; finesse, pitchers in the bottom third in strikeouts plus walks; and avg p/f, somewhere in between. Looking deeper into Gregorius numbers last year, and we see that he struggled the most against finesse pitchers. Which is strange because teams usually stack their power arms in the bullpen. And we just got done saying that Didi's struggles against lefties are isolated to the bullpen. 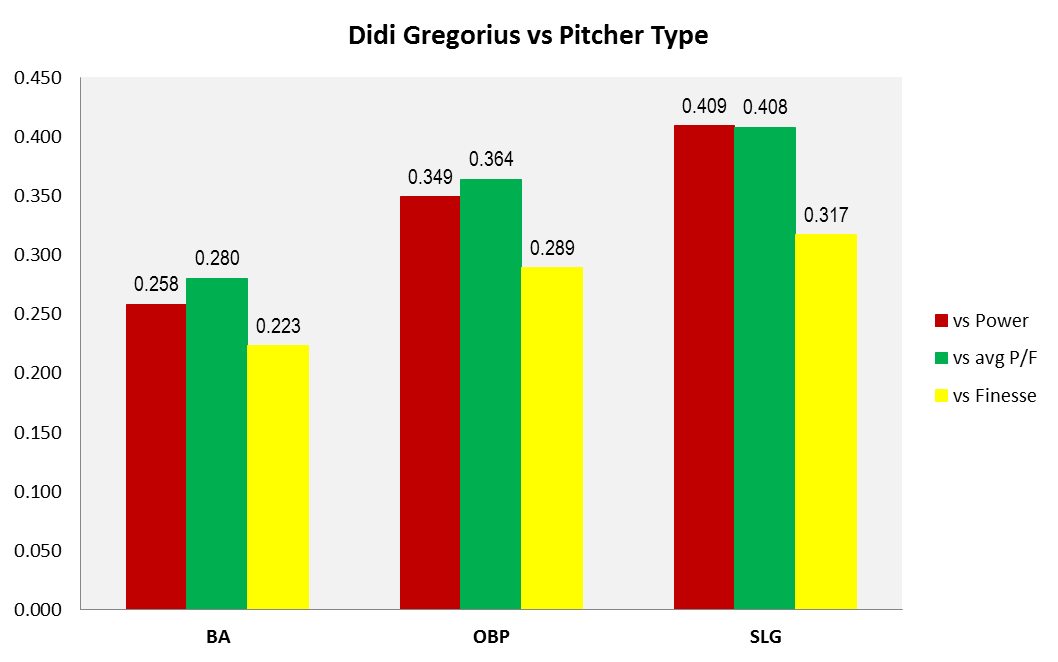 The numbers from the chart don't lie. Despite having fairly equitable plate appearances against the three pitcher types - power (106), avg P/F (145), finesse (153) - Gregorius could not hit finesse pitchers last season. Since we know that his struggles were mostly confined to left-handed relievers, we can reason that opposing teams found great success matching up finesse pitchers against him late in games.

Does any of this mean anything?

It is hard to say. Gregorius only had 41 plate appearances against left-handed relievers last year. Not enough to prove that his abysmal performance, particularly against finesse types, is something to worry about. But it is definitely something to pay attention to in 2014. Whatever team he ends up playing for, it will surely be highlighted that he struggles against left-handed pitching. So far, not in the conventional sense you would expect.