Can Yoenis Cespedes recapture his 2012 magic?

Yoenis Cespedes had a difficult year offensively in 2013 and is now tinkering with his swing. What changed for Cespedes between 2012 and 2013? More importantly, how can he improve in 2014?

Share All sharing options for: Can Yoenis Cespedes recapture his 2012 magic?

Yoenis Cespedes burst onto the major league scene in 2012 when the Athletics put him on their 25-man roster right out of spring training. This was a fairly big risk considering Cespedes' only previous professional experience was in the Cuban National Series. He adjusted to big league competition quickly, however, and finished the year with a .292/.356/.505 line, a 137 wRC+ and 2.9 fWAR in 129 games.

As a result, Cespedes came into the 2013 season locked in as one of Oakland's primary outfielders, but struggled for much of the year. His offensive output was well below his rookie season, as he batted .240/.294/.442 with a 102 wRC+. Such production made Cespedes look much closer to a league average player.

What is the best season a player could have?

What is the best season a player could have?

Now Cespedes is gearing up for his third big league season and is reportedly trying to shorten his swing to reverse the drop in performance he experienced last year. Did his drop in performance come as a result of pitcher's approaching Cespedes differently? Let's take a look at some numbers.

To begin, it is noteworthy that Cespedes' 2012 BABIP was .326, which was quite a bit higher than league average (.297). Some regression was likely in order, and it came in 2013 as his BABIP fell to .274, which was quite a bit lower than league average (.297). So perhaps his overall offensive production drop was a result of some bad luck on balls in play.

However, looking at batted ball data reveals it was not just a matter of luck. In 2013, Cespedes hit fewer line drives and ground balls and more fly balls (see table below), which is generally a bad recipe for success at the plate.

Alas the 2013 struggles were not just luck, but rather a change in quality of contact. Perhaps this was a result of pitchers altering their approach for attacking Cespedes in 2013. First, let's look to see if Cespedes faced a different form of pitches from major league hurlers. Here are the rates for pitch categories from Brooks Baseball across Cespedes' two seasons:

There does not appear to be much of a change in the pitch types used by opposing pitchers. They threw more breaking balls and fewer offspeed pitches in 2013. But the differences are hardly significant. 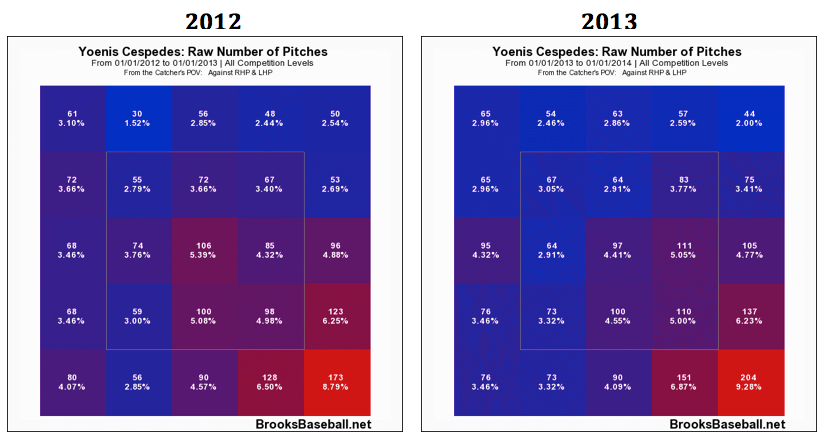 It looks like there is something here. In 2013 pitchers were living on the outside corner and outside the zone-away to Cespedes. It also looks like they threw a few more pitches up and out of the strike zone. These approaches to getting Cespedes out may have led to his 2.6% increase in swing rate for pitches outside the strike zone (O-swing%), 5.8% increase in contact rate on pitches outside the zone (O-contact%), and 3.6% decrease in contact rate on pitches in the zone (Z-contact%).

Thus, while his overall contact rate (73.4%) did not change across the two seasons, where he was making contact did change, which may have contributed to the changes in his batted ball rates.

Ultimately, there is no smoking gun to explain Cespedes' production decline in his second big league season. It seems there is some evidence that pitchers changed their approach and threw more pitches up and out of the zone, and away from Cespedes, which might have exposed his aggressive tendencies.

But in the end, we may just be looking at a good old-fashioned case of regression to the mean and Cespedes' true talent lies somewhere between his 2012 and 2013 seasons. While it is unlikely that his aggressive approach will change, perhaps shortening his swing will allow Cespedes to make better contact on those pitches up in the zone, and those away from him, presuming opposing pitchers stay with that approach.

The Athletics will need Cespedes (and Josh Reddick) to bounce back from difficult 2013 seasons, especially given the rash of injuries to the pitching staff. Both Cespedes and Reddick had injury issues last year, so health is also a concern for them.

At the very least, I hope we get to see Cespedes defend his Home Run Derby title: