George Springer has been striking out and hitting home runs in his rookie season. His home run against David Price was an important one.

George Springer has been doing two things fairly often in his debut season. He has been striking out and hitting home runs. His 13 homers rank second most among rookies, only trailing Jose Abreu. But alongside his power, he has been striking out a whopping 32% of the time. The right-handed hitter has only briefly been in the majors, so we are learning about him each day. What has been interesting is his struggles against opposite-handed pitchers, where he has still whiffed a lot, but hasn't found any power. Until Friday.

Facing David Price, who was on his game, Springer did this:

It was Springer's 13th long ball of the season, but only his third against a left-handed pitcher. In fact, despite being a right-handed hitter, he has struggled mightily against lefties this season. Going into Friday's game, his OPS vs. lefties was .664, compared to .853 against righties. We can see in the GIF that Price left a meatball over the middle of the plate. For Springer, what should be the easiest pitch to hit, down the middle of the plate against opposite-handed pitchers, has been a struggle. 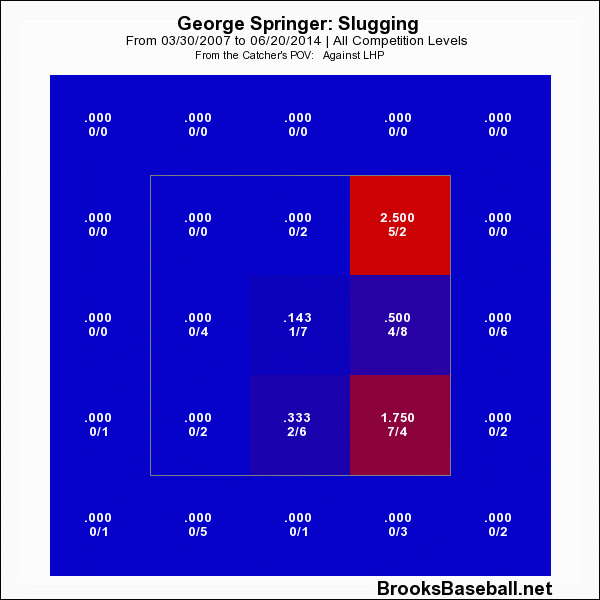 The Astros beat Tampa Bay 3-1 on Friday in a game between two teams going nowhere this season. David Price pitched eight masterful innings, striking out twelve, and allowing only the two runs that came off the Springer homer. It may not impact the pennant, but Springer's home run was important. It reminds us how Springer may be even better than his impressive 127 wRC+ already shows. If he can cut back on his strike outs and actually hit the pitches he is supposed to hit, he may be really dangerous.