The (sort of) new Alex Gordon

Alex Gordon is a good player having a great year. He's done that before, but never quite like this.

Share All sharing options for: The (sort of) new Alex Gordon

Alex Gordon is the best player on the Royals. I don't think anyone's going to challenge me on that. Maybe Salvador Perez could get himself into the conversation because catcher defense is difficult to measure, but the best player Kansas City has to offer is probably their left fielder. He's having a tremendous season by combining his offensive profile from 2011-2012 with the always impressive defense. His batting line looks almost identical to his 2012 performance with one major exception and it's an exception that jumps off the page (statistics entering Sunday). 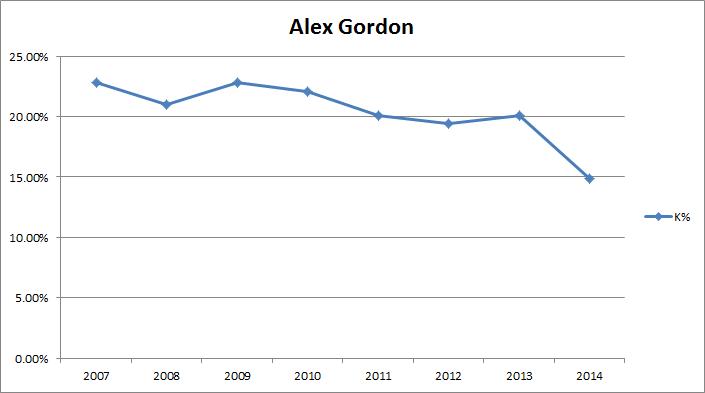 Gordon's BABIP is lower this year than in 2012, which makes perfect sense. He's putting the ball in play more often but when he does, it's not falling for a hit quite as often. Therefore, it makes sense that Gordon's drop in strikeouts isn't leading to a much better offensive line. That said, the drop in strikeouts isn't leading to worse outcomes because he hasn't completely changed his approach to become a slap hitter. You sometimes see players who try to cut down on strikeouts and it saps their power, but that hasn't happened. Gordon is simply making more contact on pitches in the zone than ever before. 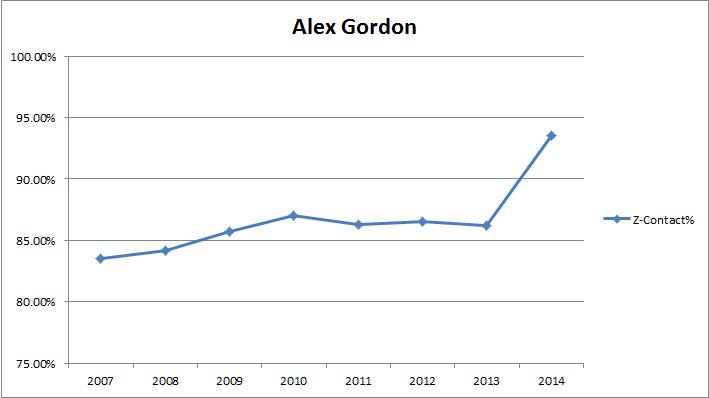 Notice the Y-axis starts at 75%

Gordon's overall offensive performance isn't really any better than it was in 2011-2012, but trading strikeouts for contact is always interesting. He's having a similar offensive season with some excellent defense, and he's already over 3.0 fWAR on June 16. The projections say he'll be about this good the rest of the way with a little bit of offensive regression and a strikeout rate closer to 19 percent rather than 15 percent. We'll buy the overall message, but dig into the strikeout rate a little further.

Let's compare 2011-2013 Gordon against 2014 Gordon to see what we might find. If you look at contact rate, which is the statistic of interest, you can see his ability to make contact on pitches up and away is improving, and this is true against righties and lefties. 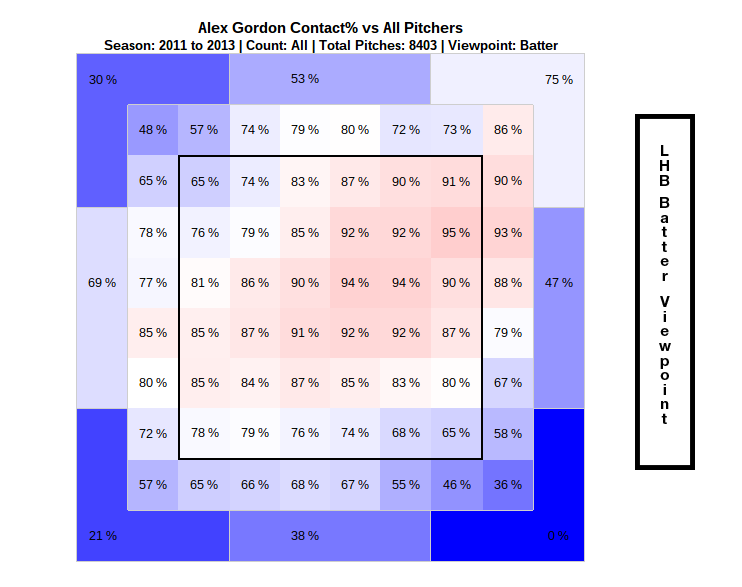 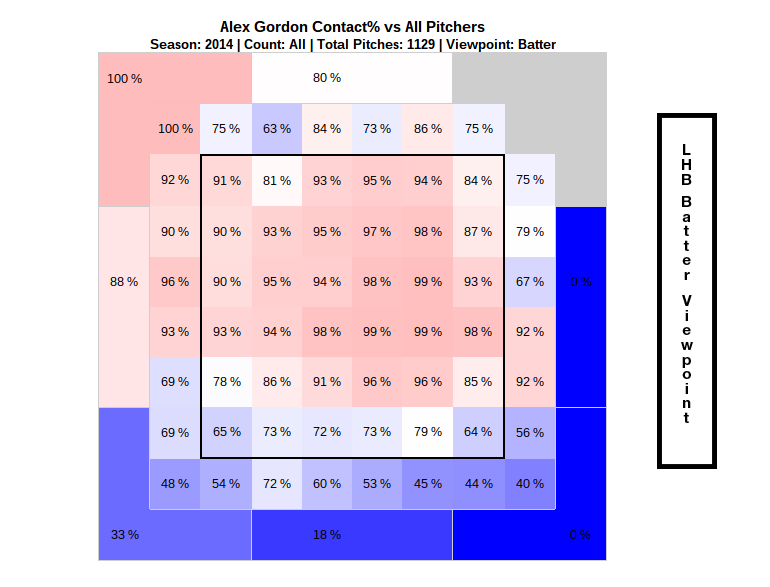 This might be nothing, but we're two and a half months into the season and Gordon is making more contact on pitches in the zone, specifically on pitches up and away and he's striking out considerably less than in any year of his career. This is also especially true regarding fastballs up and away, but the improvement holds against breaking and offspeed pitches as well.

It's a fun trend, or quirk if you prefer, because you can connect all of the dots pretty easily but the results aren't much different. Normally fewer strikeouts is either good because more balls are put in play or bad because you've lost some power. Neither is true for Gordon, but it also doesn't appear to be a random fluke. Things are both different and the same.

Regardless, Gordon is having a superb season and is a big reason why the Royals are in the thick of the playoff race despite holes in many places. The next move, I would imagine, is for someone in Kansas City to realize he's extremely good and to hit him somewhere higher than fifth in the order. After all, he's far and away the Royals' best hitter this year and it's not as if the projections love anyone else to hit better going forward.

Gordon is very good and maybe getting better. The All-Star Game should be a lock and the MVP race isn't out of the question, whether his drop in strikeout rate matters or not.