Running the bases: An analysis

How often do players get thrown out on the basepaths, and how often do they take an extra base? As scoring declines, the importance of baserunning increases.

Share All sharing options for: Running the bases: An analysis

Some time back I wrote a post introducing my Mistake Index, where a variety of different measures are gathered in one place to see how many mistakes teams and their opponents make. This index is in a Google Docs spreadsheet and updated daily. It's not perfect, but it combines a number of measures for easy reference and comparison.

There are three broad categories of  mistakes -- pitching, fielding and baserunning. Baserunning mistakes have their own name, the TOOTBLAN, which stands for Thrown Out On The Basepaths Like A Nincompoop (from noted etymological source Urban Dictionary), and a very strong argument can be made that these represent severe lapses in judgment. This isn't always the case -- sometimes a perfect throw by Yoenis Cespedes will get a runner out, but often they're mistakes, and possibly the most correctable in baseball.

I add getting caught stealing and picked off to TOOTBLANs as baserunning blunders. These measures can be found in this section of Baseball-Reference.com and is very illuminating when viewed in the whole. These are the leaders in base running mistakes through Monday, June 16th:

And look who's near the top, none other than Mr. Excitement himself (with apologies to Jackie Wilson), Yasiel Puig. Yes, he's an electric player, a very good defender and one of the better players in baseball, but he is a disaster on the basepaths.

I show caught stealing with some trepidation, since more stolen base attempts typically leads to more caught stealing -- it's a far cry from being thrown out ten times while stealing sixty bases as opposed to thirty. Pickoffs are a different matter, since I consider all of them to be lapses in judgment.

Good things occur on the basepaths as well, and I would be remiss if I didn't point these out. It doesn't have the same catchiness the Mistake Index has, but if I'm going to show negative outcomes, I should point out the positive as well, such as stolen bases, reaching on errors or taking an extra base (for example, going from first to third on a single). Same players, different measures:

This puts things in a different light. Using Starling Marte to explain, he's reached base on an error nine times, suggesting he has enough speed to either force a bad throw or take advantage of one. He's taken six extra bases by tagging up or advancing on a wild pitch or passed ball. He's been on first when a single was hit 22 times and made it to third 14 times, 14 occasions of taking the extra base. By my standards, Marte has made 18 mistakes and created 53 positive outcomes on the basepaths. Given this, let's expand this list and look at the ratio of good events to bad:

This adds perspective and shows that aggressive base running can pay off with an accomplished runner. This doesn't help Puig but shows players like Brian Dozier, Nori Aoki and Dee Gordon are benefiting teams more than they're costing them by being both aggressive and smart on the basepaths.

This graph shows the Good Events/Bad Events ratio since 1950: 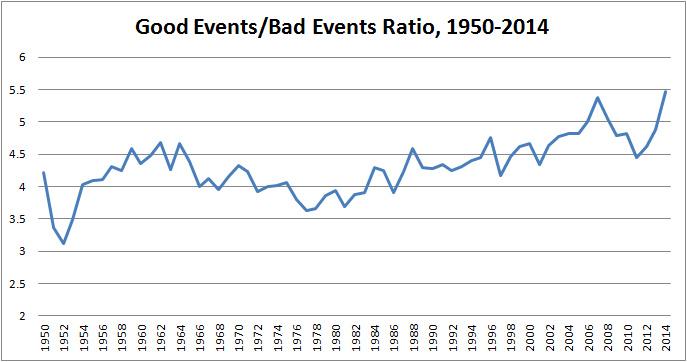 In general, baserunning intelligence appears to be on the rise as teams recognize giving away bases can lead to fewer runs. Baseball is in a period in which pitching is out-pacing hitting, making each incremental base that much more valuable and each out costlier. Baserunning is one of the easiest fixes any team can make, particularly when there are coaches on the field who can give direction.

I created a spreadsheet with this data for all players going back to 1945 with at least 1000 career PA. Data before 1973 isn't complete, but comparisons can still be made. As George Orwell famously wrote, "All mistakes are equal, but some mistakes are more equal than others."* I find baserunning mistakes to be a class of mistake curable by coaching, and as runs become harder to get, more and more teams will realize this.

*This is the famous last line from "Animal Farm," which correctly reads "All animals are equal, but some animals are more equal than others."

All data from Baseball-Reference.com. Any errors in compiling or amalgamating the data are the author's.