Playoff odds and games back in the standings

A look at the relationship between cumulative games back in the standings and odds of making the playoffs.

Share All sharing options for: Playoff odds and games back in the standings

Trying to quickly determine the odds of your favorite team making the playoffs can be difficult. A logical first step is to look at the standings. If your team is four or five games back of the division leader, or a wild card spot you probably feel like there is a pretty good chance that the deficit can be overcome. However, this comparison only includes the leader. It ignores any teams between your team and the leader. Realistically all those teams need to be surpassed as well. These other teams don't just stop playing and let your favorite squad chase down the leader. For this reason looking at cumulative games back might be a better place to start.

A team's cumulative games back is the sum of games back from the leader and from each of the teams ahead of them in the standings. As an example we can take the Red Sox. Through Sunday's games they were 31-38, nine games back (GB) of the division leading Blue Jays. But they were also 4.5 GB of both the Yankees and Orioles. So the Red Sox were 18 cumulative GB in the division. What about a Wild Card spot? Well through Sunday the Red Sox were tied with the Astros (!!) at 5.5 GB of the second wild card spot. But they had seven other teams to pass on their way. They were 1.5 back of the White Sox, two back of the Twins, three back of the Rangers, 3.5 back of the Indians, four back of the Mariners, and 4.5 back of the Yankees and Orioles. Add all that up and you find that the Red Sox are 28.5 GB of the second wild card spot. That may seem like a lot of extra work, but it is easily found in the GBsum column of the Baseball Reference detailed standings.

My analysis is for the 2014 season (through the Sunday June 15 games). I would have carried out the analysis for previous seasons, or even across days within this season but I don't have access to the FanGraphs playoff odds reports for specific dates. It would be interesting to see the relation across time, or through June 15 across years. So for now, looking at this season will give us a starting point.

Using the Wild Card standings I calculated GBsum (as described above) for each of the 12 teams. Doing it this way excludes the division winners, but I wanted to focus on the threshold for getting a playoff spot (i.e., wild card). Larger GBsum values are bad, so the team leading the standings was given a negative GBsum value indicating how many games ahead of the second place team they were. So a team that had a one game lead over the second place team was given a GBsum value of -1. The second place team then had a GBsum of zero. All other GBsum values were calculated up to this second place team, as that team represents the threshold for a playoff spot. I then correlated the GBsum value with the DOFF values on the FanGraphs playoff odds. DOFF gives the percent chance that a team will make the division round of the playoffs. DOFF can be calculated in a number of ways. The two that I used were the FanGraphs Projections Mode and the Coin Flip Mode. You can read more about these here. But basically the season is simulated 10,000 times. With the projections mode, Steamer and ZiPS projections are used to determine the odds of winning each game in the simulations, meaning team talent is taken into account. With the coin flip mode, all teams are considered equal and the odds of winning any game are 50/50.

Hopefully that was all clear. Feel free to leave questions in the comments below. Here are the results. First, the relation between cumulative games back (GBsum) and DOFF according to the projections: 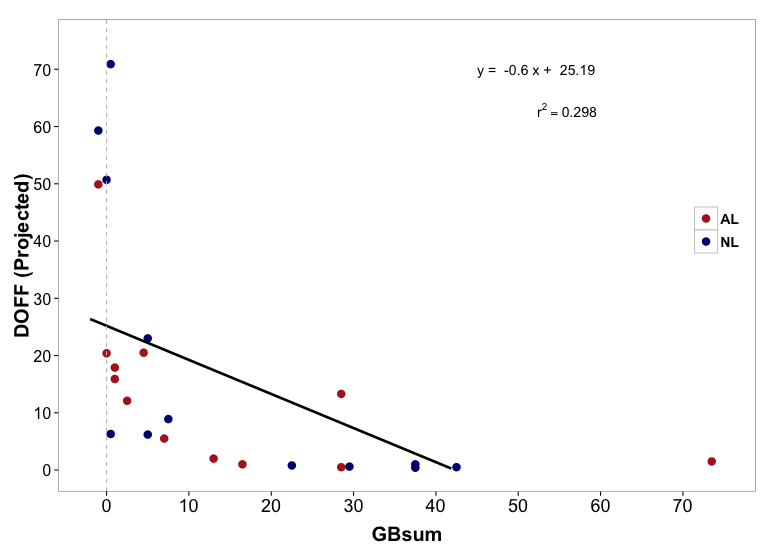 You can see that the correlation is not great (r = -0.546). A linear fit may not be the best approach. However, there is some consistency between cumulative games back and the projections. Teams that are a few games back of a playoff spot are projected to make the playoffs, teams that are many games back of a playoff spot are not. The projections really like three NL teams (Cardinals, Dodgers, and Nationals) and one AL team (Angels) and all of these teams are currently in or close to a wild card spot. It may not be evident from the figure but the correlation is better for the NL (r = -0.669) than for the AL (r = -0.508). What is clear is that if a team is more than 10 GBsum the odds they make the playoffs are really low, with the exception of the Red Sox (28.5 GBsum, 13.3% DOFF). The Rays (73.5 GBsum) are in real trouble.

How about DOFF with the coin flip mode? 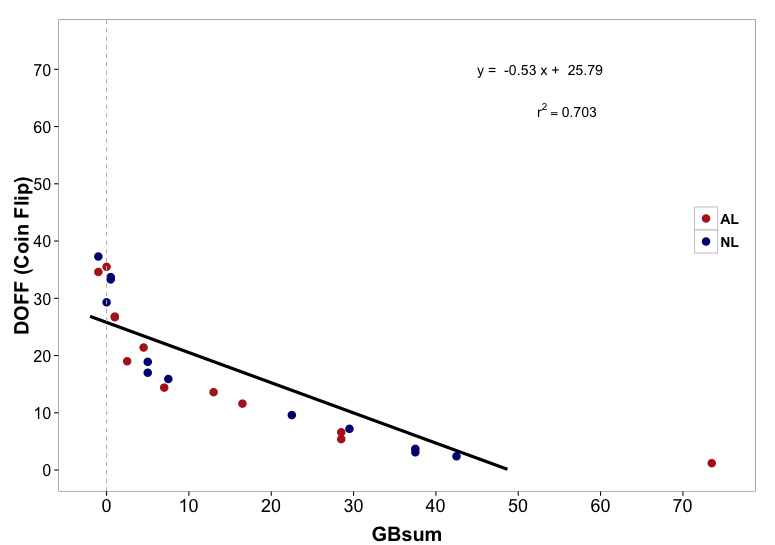 We can see that the correlation is much better (r = -0.838). Assuming that all teams are equal maps onto GBsum much better than taking into account any discrepancy in talent. With the coin flip mode there are not the clear playoff favorites that are present with the projections mode. The relation is better for the NL (r = -0.913) than for the AL (r = -0.796), which is likely due to the poor Rays. Again we see that being 10+ GBsum really spells doubt for making the playoffs.

In sum, the GBsum measure is most related to the playoff odds that assume all teams are equal. So perhaps this could be taken as a quick way to gauge the likelihood of your favorite team making the playoffs, if you did not have access to the FanGraphs reports that are based on simulations. But all teams are not actually equal so the utility is limited. Additionally, GBsum does not appear to offer anything over the simple number of games back of the leader (r = -0.686 with projected; r = -0.943 with coin flip), other than perhaps a larger, scarier number for the teams that are lower in the standings to stare down.