David Price has, at least statistically, struggled with his changeup in 2014, but is this a trend that we should expect to continue?

Let me start out with a statement that borders on "bold": David Price is on pace to have his best season as a Major League pitcher. That's right: Price, owner of a "meh" 3.93 ERA and six years under his belt, is on pace for a career year. No misprint there.

And...cue the angry comments from some angry people.

Okay, so maybe there are people out there who are aware as to where I'm headed—to the land of Price's fantastic peripherals. Because, thus far, ERA paints a pretty mediocre picture, but at the same time, that picture is sorely deceiving. Not that a 3.93 ERA is terrible for your everyday Joe, but Price is no everyday Joe. By ERA, only his first full season was worse than his current 2014 campaign, at least by ERA, which is why we need to dig a bit deeper.

So, let's proceed to those aforementioned peripherals:

All good. All very good, in fact. They look even better when you consider that the career column includes 2014.

As for how some of those numbers stack up: Price is top-5 in xFIP and K%. He leads baseball in K-BB%. He's top-25 in FIP. And, only Phil Hughes boasts a lower walk percentage. I could rattle off a few more tidbits of note, but you get the point. Sure, ERA paints mediocrity, but in reality, David Price is being David Price, and then some.

But there's actually something we can quibble with, something that doesn't necessarily show up in the numbers. And what is that exactly? Price's struggles with his once vaunted changeup; yeah, it could still be a deadly weapon, but so far, the numbers say otherwise.

Before delving into the negatives, how about a quick visual of the pure nastiness that is Price's changeup?

Only four other pitchers had better changes than Price from 2010-2013, per FanGraphs' Pitch Values. And, if you'll take another glance at the above GIF, well, you can see why. It's a devastating, sharply tailing away from righties.

Of course, that's all in the past tense, and what we really care about is the present tense, which isn't so rosy.

First, the specifics: Price is still throwing his changeup with his usual frequency, if not a tad bit more (17.2% this year vs. 16.7% in 2013). But nothing has significantly changed from his count-dependent usage--he still relies on it heavily when he's behind in the count against righties and tends to stray a bit from it when he gets ahead. Any previous horizontal or vertical movement hasn't been sapped up—he's actually getting a bit more bite, especially of the horizontal variety. But the most important factor hasn't remained steady: The actual results.

The below table sums things up reasonably well:

Note: "TAv" stands for True Average, ISO stands for Isolated Power and wOBA is Weighted On-Base Average. Remember, all of those numbers refer to Price's changeup only.

Quite a difference. And those figures aren't just "David Price bad." They're bad, in general. Only four other pitchers who've thrown a changeup at least 200 times this year have posted worst ISOs, and the same goes for his ranking in the .TAv department. They're bad, period.

So now, we have to figure out why Price's changeup has waned in effectiveness, which isn't quite as easy as it sounds. Just take a glance at the table below, for starters.

The second row (2010-2013) is more or less when Price's changeup was, statistically, in its best form, as I already noted.

If there's anything we can clearly infer, it's that 2014 hasn't been such a bad year for Price's changeup, after all--at least by the numbers above. He's throwing more strikes to fewer balls. Not only is he inducing more swings, but more of those swings have resulted in whiffs and thus, fewer balls in play.

Again, however, the results don't paint such a picture. To reiterate: From 2010-2013, Price had a top-5 changeup, but in 2014, he's had a merely below-average changeup. Big difference, obviously.

So let's get to the good and bad, starting with the bad: Bad, because what's already happened has happened. Price can't turn in the homers he's already yielded this year with his changeup (Brooks Baseball says he's given up three, FanGraphs says four). That's in the books. But here's the good: His current 23.5 changeup HR/FB% is bound to come down, probably somewhere close to his career mean.

Now, I'm predicting it'll come down, but it's not necessarily going to do so without an adjustment or two. Sure, some of that regression will just happen, because that's just how numbers work. But Price hasn't been as sharp with his changeup command this year as he's been in the past. 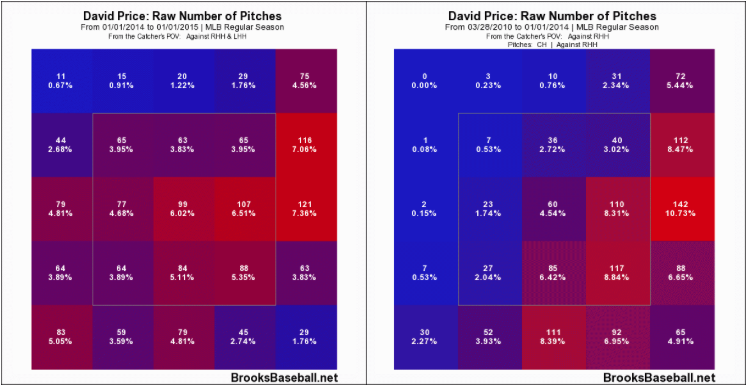 Note: Both zone profiles are from a catcher's perspective against right-handed hitters only

Try and look more at the actual percentages than the color, as they're a bit more telling. What you should be seeing: On the left (2014), there are higher percentages in the middle of the zone and lower percentages on the corners compared to 2010-2013, which is on the right.

The differences aren't really dramatic. If you looked solely at the coloring, you'd hardly tell much of a difference. But they don't necessarily need to be dramatic. A few more pitches over the middle of the plate here and a couple of pitches away from the outside target there, and suddenly, it's a pitch that's getting hit around a bit.

There's been a bit of flukiness to the success opposing hitters are having against Price's changeup this year. There's the enormously high HR/FB%. There's the table that paints a much, much brighter picture, one that might even suggest that the 2014 David Price changeup has actually been better than the 2010-2013 David Price changeup; that's a debate for a different day, however. And, there's the .377 BABIP (against just his changeup), which is 129 points higher than his career .248 mark.

So, let me say this: Price's changeup should start faring better in the numbers. And by that, I mean that it's still a darn good pitch, which is all that matters, right? I'd say so. Oh, don't forget that he's having a career year.

All statistics courtesy of FanGraphs, Brooks Baseball and Baseball Prospectus

Jake Dal Porto is a Featured Writer at Beyond The Box Score. You can follow him on Twitter @TheJakeMan24.