A down year for Miguel Cabrera is still better than most

Miguel Cabrera's stats are down across the board this season, yet almost every player in MLB would kill to have them.

Share All sharing options for: A down year for Miguel Cabrera is still better than most

Miguel Cabrera has won the American League Most Valuable Player award in each of the last two seasons, beating out Mike Trout both times. This year, however, Trout is all but guaranteed to snatch Cabrera's crown away and take his place on the throne. This will happen because technically Cabrera is having a down year -- at least in terms of what we're used to seeing from him -- and Trout is showing why he's the best player in baseball.

When I say Cabrera is having a down year, what I really mean is that he's still dominating, just on a lesser level. Almost every player in baseball would kill to have the kind of season Cabrera is currently putting together; that's how good he is. Even when he's not his usual self, he's still one of the most feared hitters in baseball.

Clearly, Cabrera is not having a Cabrera year. Not only are his power and average numbers down, his on-base percentage and walk rate are his lowest since 2008, his first year in Detroit. Additionally, his fly ball percentage, which correlates with home runs, sits at 33.6%. If he finishes the season with that number, it will be the second-lowest of his career.

So what's up with Cabrera? Well, for starters, he is no longer mashing the fastball like he used to. According to FanGraphs, Cabrera's wFB (fastball runs above average) was a whopping 39.3, good enough for fourth-best in baseball. This year is an entirely different story as his wFB is 7.8, which ranks 49th.

The Tigers' third baseman is also having a hard time dealing with pitches on the inner half of the zone, something he's not accustomed to. Courtesy of Brooks Baseball, take a look at his slugging percentage from 2007-13. Then, compare that with 2014. (Keep in mind that this chart is shown from the perspective of the catcher.) 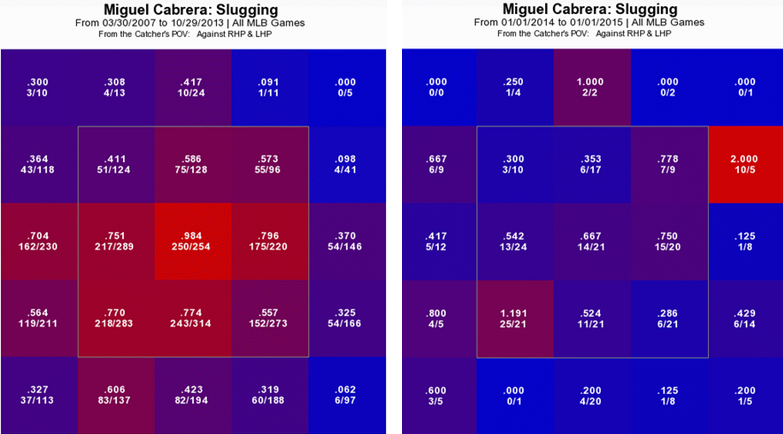 The inside part of the zone is still Cabrera's zone of power, but on a lesser scale in 2014. In his career, when he pulls the ball he is slugging .831 (how insane is that?). This season, however, he's slugging "only" .747. For someone like Cabrera, that's a pretty substantial dip, but any other player would gladly take the 2014 number with a huge smile.

Remember when I said Cabrera was having a down year? Well, despite that, he still ranks 16th in WAR, 13th in wOBA, 12th in wRC+ and 8th in batting average. This is just further proof of how dynamic and amazing he truly is. Even when his stats say he is underperforming, he's still better than 98 percent of the league.