What happened to R.A. Dickey?

Is it more than knuckleball problems plaguing R.A. Dickey?

Share All sharing options for: What happened to R.A. Dickey?

A knuckleball is a scary thing. Not only to opposing hitters, trying to guess where the pitch will jump to next, but to baseball bloggers trying to make sense of the pitch that has historically produced results, like its movement, all over the place. R.A. Dickey won a Cy Young award in 2012 for the Mets. He was then traded to Toronto and somewhere in the Canadian exchange, he seemed to lose his success.

In Dickey's first season in Toronto, a sore back and neck soreness caused his knuckler to lose velocity. He was throwing less hard knucklers. His 77-78 MPH average in 2012, dropping to below 75 MPH by May of 2013. But while his reduced velocity was identified by many as reason for his lack of success, it wasn't something new. In fact, in the two seasons before his Cy Young season, both in which he didn't pitch outstanding like in 2012, but still very good, his knuckler found an average velocity in closer relation to 2013. The anomaly in his release speed was not last season, it was in 2012. 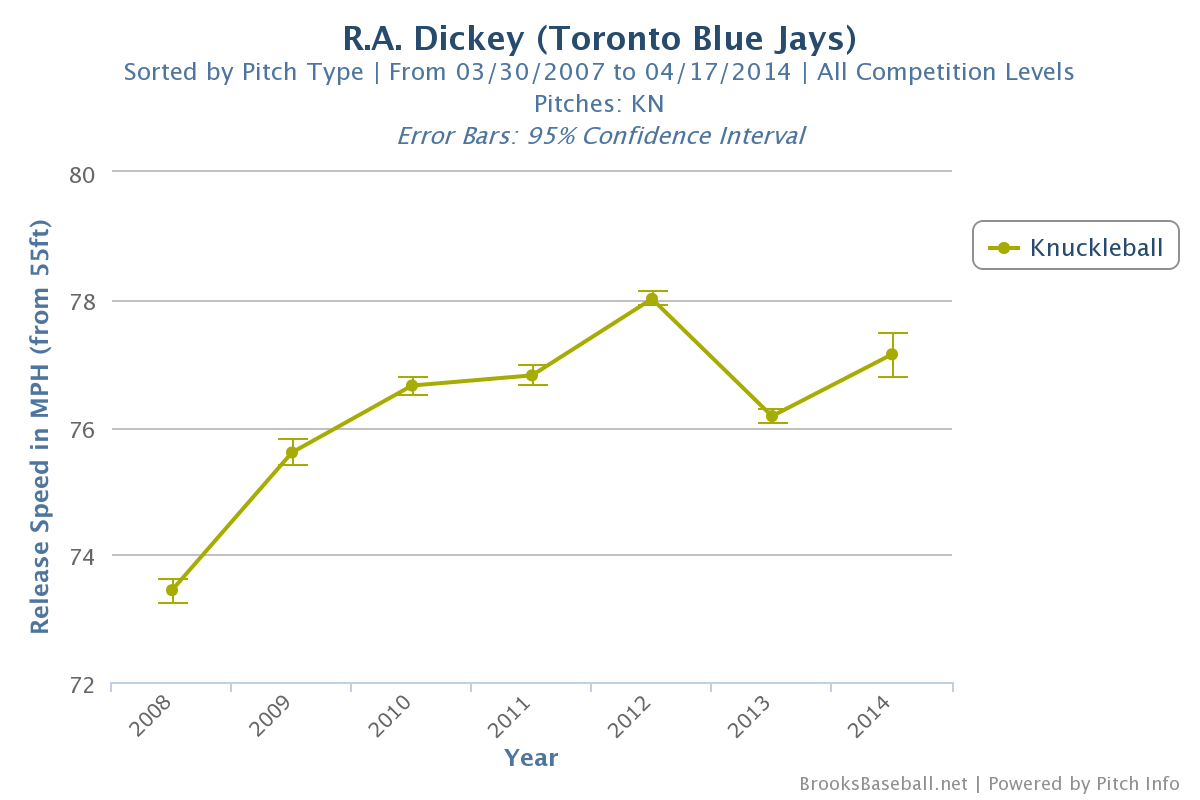 The trend that does seem to be working against Dickey is his ground ball and swing-and-miss rate.

Most interesting, his ground ball rate. In 2010, Dickey was producing 54.3% ground balls per ball in play when throwing his knuckler. By his superlative 2012 season, he was only generating a ground ball against the pitch 46.3% of the time. A big drop-off considering his added success. But where he made up for it was mixing in a fourseamer and sinker. He generated ground balls above 50% on both pitches in 2012, having added the fourseam to his repertoire to give him just a slight variation to show hitters in order to create favorable outcomes.

By 2013, Dickey's trend towards producing less ground balls continued. His knuckler only generating grounders 42.4% of the time, or a 12% drop-off from 2010 and 4% drop-off from 2013. The problem was that even though this trend had existed in prior seasons without impact, in 2013, his fourseam fastball and sinker also failed to produce ground balls. He threw more fourseamers and less sinkers than in 2012. His ground ball rate on the two pitches dropping 20% and 5%, respectively. 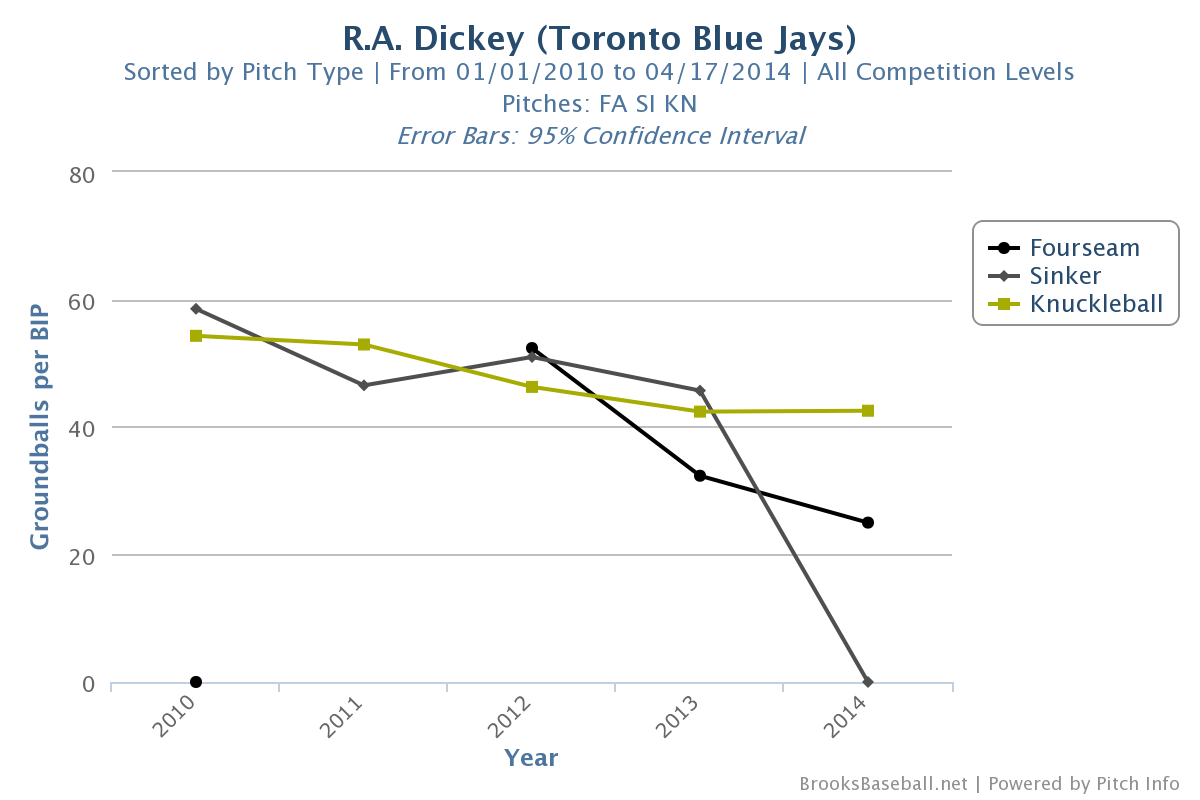 Besides producing less ground balls, Dickey is also getting less swings-and-misses. One of the most striking differences in Dickey's success in 2012 versus the rest of his career was the amount of whiffs per swing he got with his knuckler. In 2012, he made hitters miss the knuckler 28% of the time, an improvement on the roughly 20% in the two previous seasons. Last year, he regressed to 23%. And while hitters were just as aggressive in swinging at his alternate offering of pitches, he got less whiffs on both the fourseam and sinker, too.

What we are learning is that while R.A. Dickey is a knuckleball pitcher to every sense of the word, his troubles in Toronto compared to his off-the-map success in New York cannot be isolated to the mysterious pitch. He is throwing less hard knucklers, but that didn't seem to be a problem for him in other seasons he pitched effectively in New York. Just as his declining ground ball rate still existed in 2012. Where his Cy Young season sticks out from the rest of his career was his ability to mix in fourseam fastballs and sinkers with success.

It seems counter-intuitive to believe, but R.A. Dickey didn't have any more success in 2012 in terms of opposing hitters slugging against his knuckler than he did between 2010-2011. Then, in his first season in Toronto, hitters did find more success hitting against his knuckler, but it was really his sinker and fourseam that became very hitter friendly pitches. Dickey used a sinker and knuckler to fairly consistent results between 2010-2012. He started to use his fourseam more often in 2012, finding decent success, but then the mix of all three pitches created a bad taste in 2013. 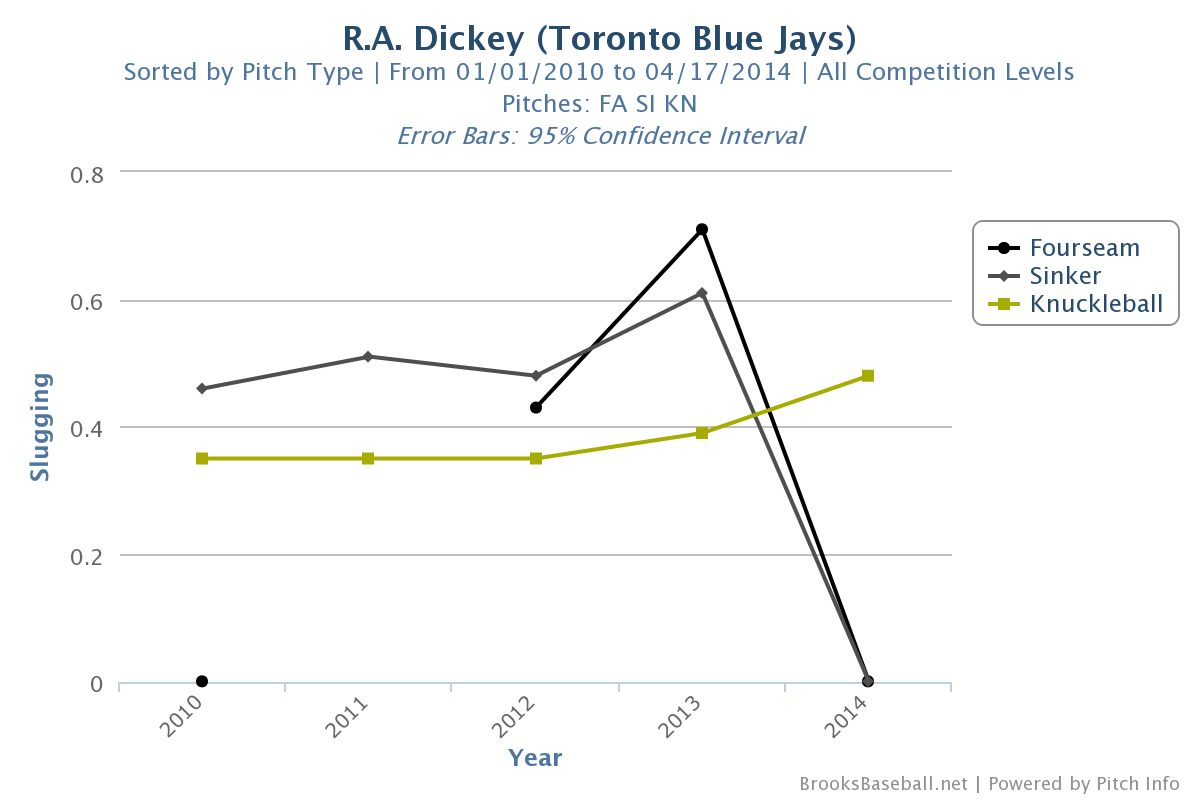 We have made it this far in the article without talking about 2014. Dickey is apparently healthy, so the bad back and neck soreness are no longer excuses, and yet he is still struggling mightily. In four starts, he has allowed at least five earned runs three times. He has nearly walked as many as he has struck out. And in his most recent start, he got a measly seven swings-and-misses on 112 pitches.

The sample sizes in the graphs above are too small to fairly compare, but we can at least see that his velocity is back up on his knuckler, and while he is throwing the pitch more often, he still mixes in a fourseam and sinker, but continues to find difficulty generating ground balls from both pitches.

When R.A. Dickey won the Cy Young for the Mets in 2012 he was a knuckleball pitcher unlike any we had ever seen. He threw the knuckler in the high seventies, and mixed in fourseams and sinkers too. He was able to offset a declining ground ball rate with a spike in strikeouts. And he did so with pinpoint control.

By the time Dickey arrived in Toronto, his trend towards producing less ground balls, which really started after the 2010 season, could not be stopped. Except now, he is no longer striking opposing batters out to make up for it. And his alternate pitches - fourseam and sinker - are no longer providing added support in generating ground balls or securing outs.