Mark Buehrle has been a good pitcher for quite some time, but what is the key to his success?

Growing up as a White Sox fan over the years, I had the pleasure to watch Mark Buehrle pitch every fifth day. Whenever Buehrle took the mound there was always a sense of elation in the air because you knew you were going to watch a good game. Despite never having superior velocity or overpowering stuff, Buehrle has year in and year out defied the odds. So much so that he's gone on to have an under the radar, yet illustrious career. Simply by doing what he does best, being a master of the strike zone.

First I'd like to begin by showing how he's attacked hitters. Below are his zone profiles versus righties and lefties respectively. As a quick aside, unfortunately Brooks Baseball only goes back as far as 2007, however there's still plenty for us to look at. 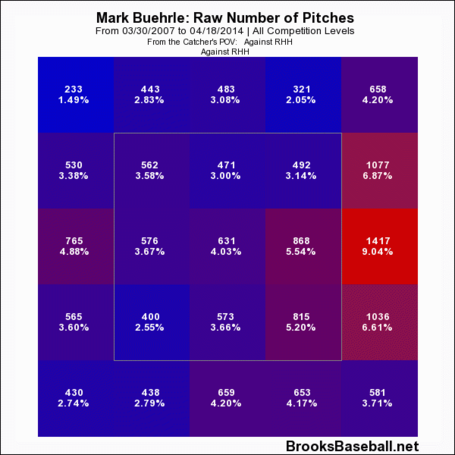 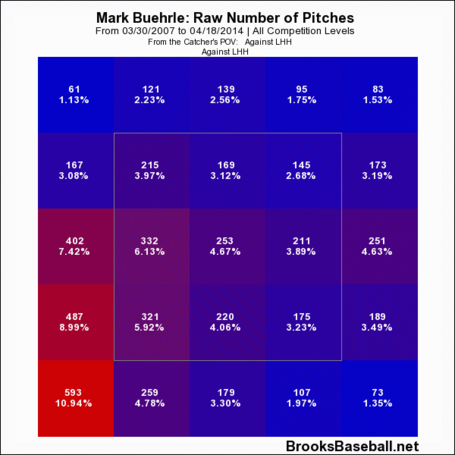 As we can see Buehrle's strategy is fairly simple; live on the outer edge of the zone respective to the handness of the batter. However, this is easier said than done. It's difficult enough for pitchers to harness their control within the zone, let alone their command. Yet, Buehrle does this through his impeccable command of the strike zone. As Jeff Sullivan pointed out two weeks ago, Buehrle is the epitome of a lay down the glove and he'll throw it right there pitcher. In case you missed it, here's but two examples of Buehrle demonstrating this ability.

However, as you also might have noticed between the GIFs and profiles, Buehrle is an edge master. With the gracious help of Bill Petti, here is a table of Buehrle's edge prowess.

For those of you whom are unfamiliar with edge %, it's essentially what you'd think it is; percentage of pitches within the inner and outer edge within the strike zone. For further reading on the topic, may I direct you here. Heart_p is intuitively pitches right down the middle of the plate and OOZ_p is the percentage of pitches outside of the strike zone. Getting back to the table, we can see by Edge%+ (which is edge% compared to league average of approximately 16-17%) we can see Buehrle has been above league average as far as our numbers take us back. And this year, tied for 9th in baseball in edge%+. Yes, small sample size, but cool nonetheless. In case you're interested in the other pitchers that were ahead of him, here they are.

While Buehrle has never been the quintessential ace, he has been the go to guy on the teams he's pitched for. He's done so by becoming a master of his craft, an accomplishment reserved for few pitchers. The ability to command pitches wherever you want them is a fine characteristic for a pitcher, but to do so with consistency on the edges of the plate is a rare feat. And in essence has allowed Buehrle to be so good for so long. Buehrle is thirty-five years of age, so who knows how much longer he'll be able to keep this up, but if there is anything Buehrle has taught us, it's that he's capable of defying the odds.