Scott Kazmir left his last start due to triceps tightness. We look at the role of the muscle in overhead throwing.

Share All sharing options for: A closer look at Scott Kazmir's triceps tightness

Oakland Athletics starter Scott Kazmir's last start Sunday against the Seattle Mariners was cut short for precautionary reasons, as he began to experience triceps tightness in his pitching arm. Thankfully for the Athletics and for Kazmir, the tightness does not sound serious and he will make his next start; however, this is the second time so far in 2014 that he has suffered some discomfort in the muscle, having been shut down earlier during spring training due to soreness. At this point, it appears the cause of the tightness is possibly dehydration and nothing indicative of anything more nefarious. However, given Kazmir's injury history, the Athletics medical staff are duly cautious with the lefthander.

Not a muscle group commonly injured in baseball, the triceps brachii—Latin for 'three-headed arm'—is nonetheless an important one. Structurally, it is comprised of three muscle bellies, or heads: the long, the medial, and the lateral. Collectively, they allow for extension of the elbow, while also stabilizing the shoulder and elbow joints and allowing for the retroversion (backward tilt) of the humerus; retroversion affects the amount of stability and mobility of the shoulder joint. The triceps also additionally functions as an abductor of the arm. Because of this ability to affect movement from two joints, the triceps is considered a biarticular muscle.

Functioning across two joints responsible for throwing has the triceps active in a number of stages of the throwing motion. However, it earns its keep, so to speak, during the acceleration phase, where it and a handful of other muscle groups—the serratus anterior, subscapularis, pectoralis major, and latissmus dorsi—are activated in an effort to propel the hand and baseball forward. This activity in the acceleration phase is accompanied with rapid elbow extension, making the triceps important in the deceleration of the forearm during extension, as the pitcher reaches out towards the plate to release the pitch. While it is not as active during these stages, the triceps do participate in earlier stages of throwing— windup and early cocking. More recent research has also shown the ratio of isokinetic strength between the biceps brachii and the triceps is an important piece to the puzzle of elbow injuries, with weaker triceps strength as compared to biceps strength being predictive of elbow injury.

With the function of the triceps in mind, let's go back to Kazmir's Sunday start, that saw him leave after six innings of two-hit, nine-strikeout ball. Could we potentially see some of the effects of the triceps nagging? Considering the location of the muscle and where it is most activated in the throwing process, we could expect that if Kazmir's triceps was a little tender and tight, that his pitches would start to creep up in the strike zone, as the ability to fully and freely stabilize and decelerate the arm is compromised.

First, Kazmir's pitch location heatmap for the Sunday outing; to the left are his fastballs and to the right, his secondary pitches: 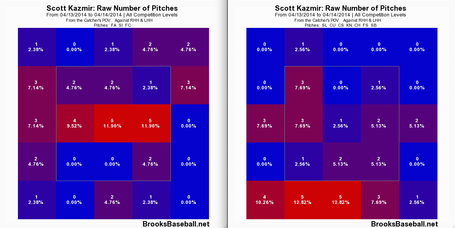 ...and here's his previous start on April 7th, for comparison purposes: 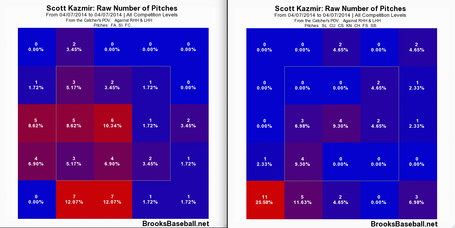 Comparing the two, Kazmir did seem to live higher up in the zone in his last start, particularly with his fastball, than he did a week prior. Let's go back to the Sunday start, but this time, let's look at his pitch location on an inning-by-inning basis to see if there's anything we can gather from looking at this data in this fashion. Here, I provide a gif of each inning pitched by Kazmir (with inning number labeled in the top right corner):

There isn't anything dramatic seen in the .gif, but we do see that around the third inning, Kazmir began to creep up in the zone with his pitches; by the time the fifth inning rolled around, if a pitch was below thigh-high, it was in the dirt. While these differences could be explained simply by park factors or even a particular approach to getting hitters out who can't lay off pitches up in the zone, knowledge of the triceps tightness and now a better understanding of the muscle and its place in overhand throwing as a stabilizer and decelerator of the arm does lend merit to thinking that the elevated pitches we saw in Kazmir's last start were due to the triceps preventing the lefty from finishing his pitches due to discomfort. For now, the injury appears to be minor for Kazmir; however, the importance of the function and strength of the triceps brachii with regards to the overall health of a pitcher's arm should not be overlooked.