Freddie Freeman does not have baseball's best eye

Michael Salfino of the Wall Street Journal used balls per called strikes to argue that Braves first baseman Freddie Freeman has the best eye in baseball, but there's a problem with his metric.

Share All sharing options for: Freddie Freeman does not have baseball's best eye

This Monday, Michael Salfino wrote an article at the Wall Street Journal declaring Freddie Freeman "baseball's most discerning hitter." To support his argument, Salfino relied not on walks or pitches seen, but invented a new statistic: balls taken per called strike.

When it comes to deciphering balls from strikes, no one tops Freeman, who hit .319 with 23 homers and 109 RBI. He only took about one strike a game, but that doesn't mean he swings at everything. Freeman took nearly five times as many balls per plate appearance as strikes, by far the highest rate in baseball, according to Stats LLC.

Salfino points out that "eight of the top 10 in this statistic hit at least 20 homers," including Chris Davis and Miguel Cabrera. Indeed, if we look at the correlation between HR and balls per called strike, we see that they are in fact weakly correlated. Of course, it's not perfect, and there are a few power hitters on the lower end of this scale. Troy Tulowitzki (25 homers, 1.91 balls/called strike), Jayson Werth (25, 1.77), and Ryan Zimmerman (26, 1.70) were all in the bottom 50 of qualified batters last year. 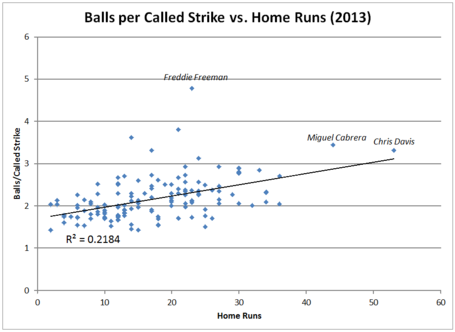 Since they're both left-handed first basemen, let's look at Freeman and Chris Davis a little more. If we look at their zone profiles from Brooks Baseball, we can divide the strike zone into 25 areas, and see what percentage of pitches each hitter swung at in each zone. Breaking it down like this, we see that in 2013, Freeman swung at more pitches than Davis in 16 of the 25 zones.

And now we start to get a sense of what Salfino's metric is missing. Freeman might not swing at everything, but he does swing at everything in the strike zone. The FanGraphs leaderboards include Z-Swing%, the percentage of pitches in the strike zone that a batter swung at. This table shows the 10 qualified hitters with the highest percentage last year, and Freeman ran away with the title.

It gets worse. Not only did he lead the league in Z-Swing% last year, but Freeman's 2013 percentage was the highest in Major League Baseball since 2006, when Vladimir Guerrero (86.6%) and Jeff Francoeur (85.8%) swung at more pitches in the zone. You can say what you will about both of these players (and I personally always enjoyed Vlad) but neither would ever be confused with a patient hitter.

Nor is Freeman's free swinging approach a new phenomenon. Since coming up with the Braves in 2010, Freeman's Z-Swing% of 80.1 percent is third in baseball behind Josh Hamilton (81.4%) and Guerrero (80.7%). That's not a critique of Freeman's approach: his percentage of swings on balls outside the zone (O-Swing%) isn't too far above league average, and he was worth around five wins to the Braves last season. But the data don't support the article's narrative of Freddie Freeman, Discerning Hitter. After all, not every pitch in the strike zone is a good pitch to hit.

Salfino sort of undermines the utility of his new statistic in the final paragraph:

[2013 MLB walk leader Joey] Votto ranked 20th out of the 140 qualifying hitters with a rate of 2.8 balls taken per strike. That is only slightly higher than the Mariners' Robinson Cano (23rd), otherwise considered one of the game's freest swingers.

If the metric has trouble separating Votto and Cano, who the author freely admits are on opposite sides of the plate discipline spectrum, how well can it really judge a hitter's eye?

All statistics courtesy of FanGraphs and Baseball-Reference. Special thanks to Jon Roegele for the inspiration.

Bryan Cole is so sick of the spring training batting practice jerseys. He is a featured writer for Beyond the Box Score. You can follow him on Twitter at @Doctor_Bryan.