The effect of temperature on hitting is very real, but how much of it is really temperature-related vs. park-related?

Baseball-Reference has game time weather data going back to 1990. This chart shows a variety of metrics and how they change as temperatures increase:

This does not include domes or retractable domes that were closed the best that I could tell.

Reasons why hitting improves with higher temperature are many and varied, such as physics (this article from Baseball Prospectus by Dr. Alan Nathan is viewable by BP subscribers only), comfort level of the hitter, pitcher grip on the ball and numerous other factors. Batting average goes up by a full 20+ points (I'll discount the under-40 games due to small sample size), slugging by almost 60 points and isolated power by almost 30 points. 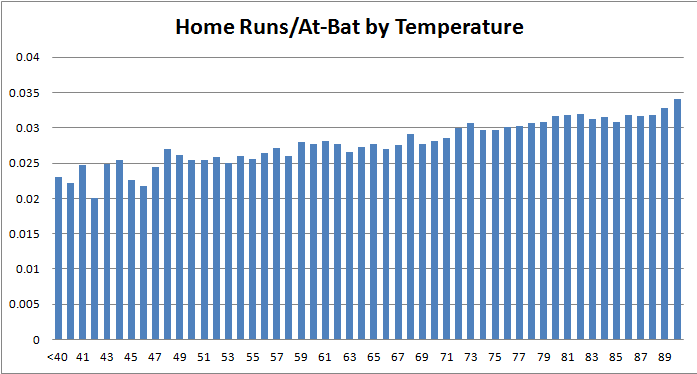 This is a case where cause and effect can be confused very easily. Since home runs increase with temperature, and really begin to take off when temperatures go above 90, it's helpful to see where games with temperatures over 90 degrees were played:

I show the park factors with some trepidation since there's an equal mix of hitter-friendly and pitcher-friendly parks included. When about 20 percent of the games played with temperatures of 90 degrees or above are played in hitter-friendly Rangers Ballpark, it's a legitimate question to ask what drives the numbers, the park or the temperature. Like almost everything else, it's both, as well as numerous other factors, not the least of which are the abilities of the players in the stadium.

This chart shows Opening Day dates for the vast majority of teams going back to 1900. The dates shown don't include dates when only one game was played:

A 162-game schedule and the gradual elimination of the Sunday doubleheader means games will have to be played in early April and even into March. As a whole baseball has been lucky as only around three percent of games have been played in temperatures below 50 degrees.

Both Chicago teams look like they'll luck out weather-wise when they open the season next week--the Cubs open in Pittsburgh (forecast calls for sunny and 61 degrees) and the White Sox open at home against the Twins (also 61 degrees but with a chance of rain). Both teams are likely to be offensively challenged this year as it is, and the chance of playing cold weather games at home won't help them any. Luckily, it hasn't happened much--out of the 2,268 games played in Chicago from 1990-2013, only 52 have been played in temperatures of 40 or below.

In the end, the old saw "They both have to play in it" holds true--if I did the research, there might be players who perform better in the extremes, but chances are it would be like most every other statistical area in that better players overcome no matter the weather. Even though home run rates may be lower in colder weather, home run hitters will still hit more home runs than non-home run hitters. Weather does have an impact on hitting--on both teams.

All data from Baseball-Reference.com