Now that the Boston Red Sox have shaved their magic beards, they are undoubtedly destined to falter in 2014, as their covalent-strength team chemistry will shatter. As the below tweet shows, the seeds of discord have already been sown.

Whoaaa Saaaaay what?! RT @GordonEdes: Gomes: The beards are coming off

I can almost see another beer and chicken scandal brewing. Or something like that.

Beard-drama and all, it appears that the Red Sox have plenty of talent returning for the 2014 season.

Just a year after the 69-93 debacle that was the 2012 Boston Red Sox, the Olde Towne Team rode magic beards all the way to the World Series, which they won in six games against the St. Louis Cardinals. Red Sox hitters cumulated 36.6 fWAR, which was more than six wins higher than the next closest team. They had a very balanced lineup 10 ten hitters producing a wRC+ greater than 100 and seven position players managing more than 3 fWAR. Offseason acquisitions Shane Victorino and Mike Napoli were excellent, and Seattle Mariners cast-off Mike Carp authored a 139 wRC+ in a platoon role.

After managing a woeful 4.72 ERA and 12.0 fWAR in 2012, the Sox pitching staff improved to a 3.79 ERA and 21.7 fWAR last season. Jon Lester led the staff after a rocky June. and John Lackey had a remarkable turnaround after missing the entire 2012 season. Though he missed a good chunk of the season as per usual, Clay Buchholz posted a 1.74 ERA and 3.2 fWAR. Koji Uehara turned in perhaps the best season in reliever history, as he allowed just 10 baserunners after the All-Star break. While it seemed like everything that could possibly go wrong did go wrong for the Red Sox in 2012, everything went right in 2013.

The Red Sox had a relatively low-key 2013 offseason. They neglected to make a huge offer to Jacoby Ellsbury, instead letting him sign with the New York Yankees. Thanks to prospects Christian Vazquez and Blake Swihart, they didn't offer Jarrod Saltalamacchia more than two years in free agency, and he signed with the Miami Marlins. Stephen Drew, who declined the Sox's qualifying offer, remains in limbo and could return to play shortstop, which would result in Xander Bogaerts moving to third and Will Middlebrooks being relegated to the bench

Their most important move was bringing back Mike Napoli on a two-year deal worth $32 million. After his three-year deal was restructured to an incentive-laden one-year deal due to a degenerative hip issue, Napoli put aside a lot of those concerns with a strong 2013 season. He hit .259/.360/.482 for a 129 wRC+, and defensive metrics and Boston coaches alike approved of his glove work at first, as Napoli totaled 3.9 fWAR. Those offensive numbers were buoyed by a .367 BABIP, but even if that regressed by 50 points and his defense drops off, he should be a league average player. Bringing back Napoli puts a strong right-handed bat in a lineup that leans heavily on left-handed hitters.

Also, the Sox signed A.J. Pierzynski to a one-year deal for $7.5 million. Pierzynski will split time with framing wizard David Ross behind the dish. He's very durable, hits a little better than most catchers, and his good throwing and blocking skills offset his below-average framing. Furthermore, by signing Pierzynski, the Sox remained committed to their catching prospects, who should be ready to take over by 2015, if not earlier.

In addition, Boston added strike-thrower Edward Mujica to the bullpen, signing him to a two-year deal worth $9.5 million. Mujica was the only pitcher in baseball to throw his splitter more frequently than Uehara, and he walked just five hitters in 64.2 innings. The 29 year-old is essentially a poor man's Uehara, and represents another quality arm in what should be a very good bullpen. 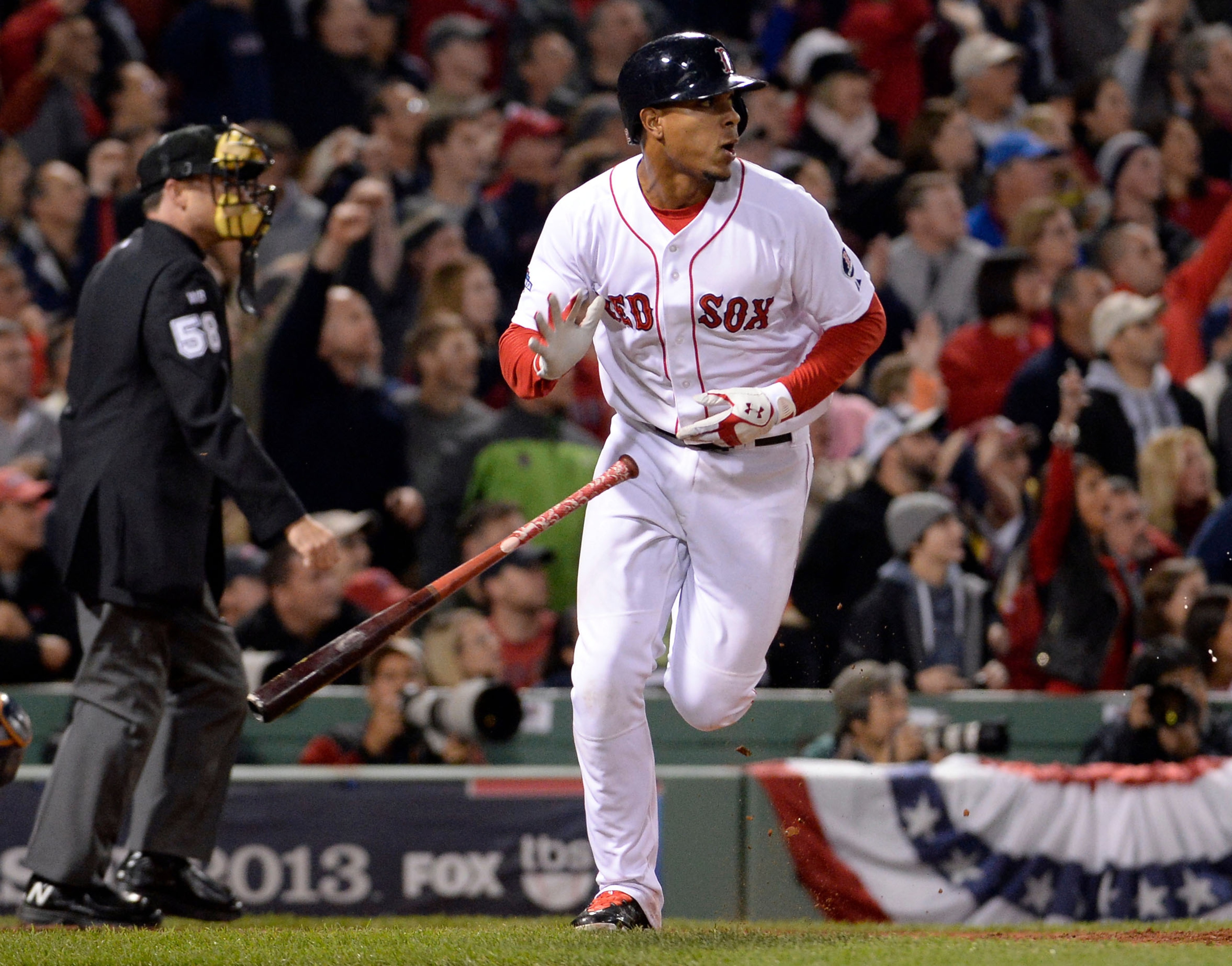 Obviously Xander Bogaerts. Need I say anything more? I don't, but I will. The 21-year-old Aruban native had his way with Double-A and Triple-A pitching in 2013, and handled himself with aplomb after making the Sox's postseason roster, as he hit .296/.412/.481 in 34 postseason plate appearances. There's a lot to be excited about, as Boston hasn't had a prospect this good in a long time. With Francisco Lindor and the younger Addison Russell and Carlos Correa, Bogaerts is the first player in what is supposed to be the new Golden Age of shortstops. With each passing day that Drew is not on the roster, it becomes more likely that Bogaerts will stick at short. He also speaks four languages, which is three more than most people.

The best team in baseball: the team after the Red

The best team in baseball: the team after the Red

Red Sox by the Numbers

At an average of 23.5 seconds in between pitches, Red Sox hitters were the second slowest team in baseball behind the Yankees. In addition, their pitching staff as a whole worked very slowly. When you consider that Boston hitters took more pitches than any other team in baseball in 2013, you see why they played such long games.

Their hitters swung at a league-low 43.2 percent of pitches and at just 27.5 percent of pitches outside the zone, the fourth-lowest mark in baseball. The focus on patience and plate discipline helped Boston achieve a major-league best .349 OBP. Working counts and drawing walks have been central features of the Red Sox offense for nearly a decade, which has the highest OBP in baseball since 2003. In 2013, they saw 4.01 pitches per plate appearances, easily the most in the majors. The swing-happy Pierzynski will bring that number down in 2014, but as a whole, expect long games and patient at-bats from Sox hitters in 2014.

The Steamer Depth Charts project the Red Sox as the second-best team in the AL, just a nose behind the Detroit Tigers. While the Tampa Bay Rays look like contenders, and the Yankees spent truckloads of money this offseason, the Sox are the team to beat in the AL East. With the oft-injured Buchholz, Tommy John-recoveree Lackey, and the fragile Jake Peavy, their starting pitchers might see some significant DL time. Thankfully, they have plenty of arms to fill in. Recently signed Chris Capuano is competent, and young hurlers such as Brandon Workman, Allen Webster, Matt Barnes, and Anthony Ranaudo all appear capable of contributing at the major league level if needed in 2014. Besides the St. Louis Cardinals, there isn't a team that is better equipped to win both now and later.

Chris Moran is a former college baseball player and current law student at Washington University in St. Louis. He's also an assistant baseball coach at Wash U. In addition to Beyond The Box Score, he contributes at Prospect Insider and Gammons Daily. He went to his first baseball game at age two. Follow him on Twitter @hangingslurves