Who breaks the news?

Which writers broke the most and biggest stories of the 2014 offseason?

Share All sharing options for: Who breaks the news?

It’s a competition to be the best. Blood, sweat, and Twitterjuice may wind up all over the floor. Tears will fall on the keypad, and then the race becomes hotter. Jhonny Peralta might sign with New York -- but he might not. Stephen Drew could and should land in St. Louis -- he didn’t. Robinson Cano is seeking a deal north of $200 million—he got it. The stove is known to be quite unpredictable when hot, and it darn well was this past winter. The result was the nation’s best baseball reporters doing what their job entails, though of course, without the blood involved. After creating a rather ordinary ranking three years ago, and after witnessing some exciting moments during the winter, I felt inclined to produce another, but also a more complex version of a system that measures a reporter's impact on the offseason. These rankings were originally organized tier-by-tier, lacking any sort of systematic approach, but I’m hoping that what follows will produce food for thought.

With its share of problems, the initial results back in 2011 did create discussion from writers. Following brief talks with well-known writers, some of whom are in their fifth decade on the job, I came to the conclusion that additional data was needed this time around. The new, updated method used for reviewing the off-season’s best reporter still certainly has flaws. All of the data comes from MLB Trade Rumors.

It's worth keeping in mind that the action of breaking news stories, such as deals between a player and team, is what all reporters are after during the hot stove season. Of course, there are tons without the luxury of a critical source at their fingertips, so we’re really talking about the best of the best: those who have totaled numerous agent and front office contacts after working many years in the business (um, except that Cotillo fellow!). As follows, we start by gathering a collection of the most active, accurate baseball insiders whose reports have generated the biggest buzz. Because this is all just trial-and-error, it seemed most logical to decide the more scoop-savvy insiders by the player quality, financial breakdown, timing of their reports, and the details they uncover. Below is a graph containing the top 50 free agents of the past off-season per MLB Trade Rumors, and the writers who reported each element of the deals. 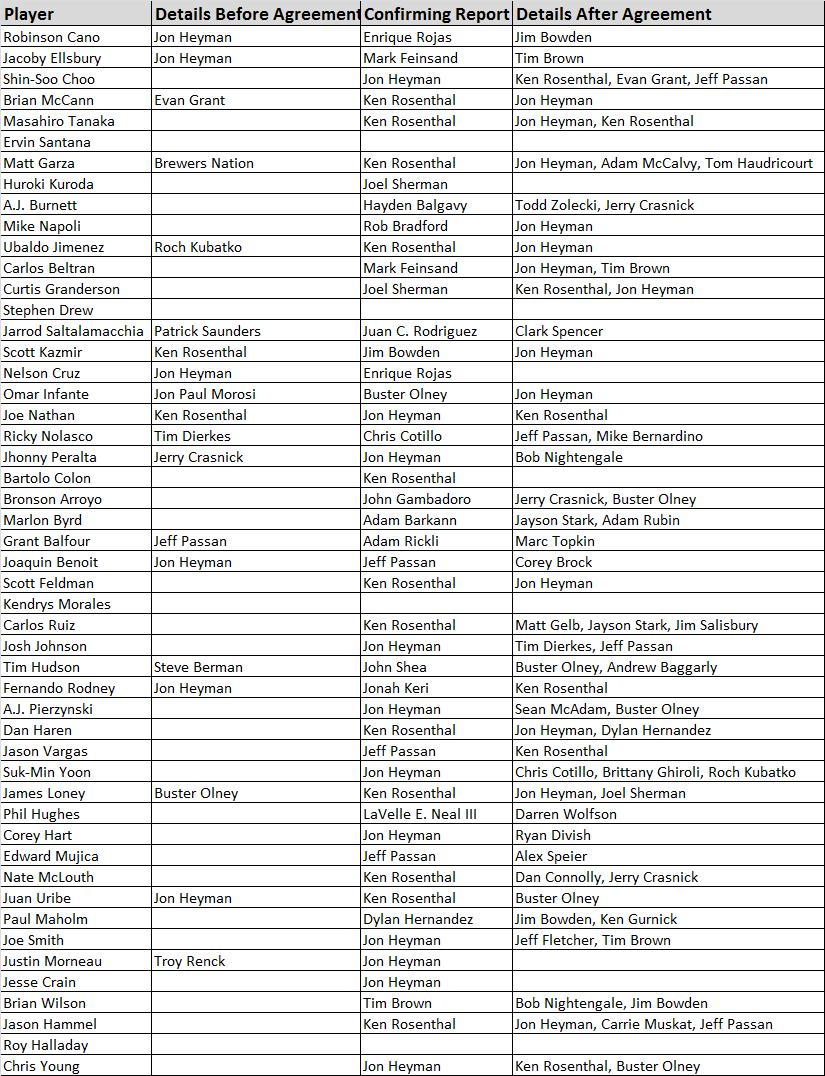 Research and discussions with insiders have led me to believe that rumors can be thrown into the cooler by just about anybody. Even when credible columnists report them, often with confidence and confirmation, teams change their mind, go after different players, and withdraw bids. Players and agents, on the other hand, receive continuous offers and will generally dish remarks that are only to alter discourse or attract attention. Rumors are inexplicably easier to report than that of a near contract agreement between team and player.

For insiders in the know, the two largest incentives are to not only confirm that an agreement is in place, or that a trade has been completed, but to offer news that such deals are "close" or "nearing." According to one reporter, the act of tweeting or blogging that a player and team are close, which is usually the first of a set of news to come takes some guts.

The other goal is to be the one to actually confirm that an agreement is in place. Most credit is usually given to the person who validates the breaking news or, in other words, the first to say, "[player] agrees to a deal with [team]," and is wholeheartedly right. This isn’t to undermine details following an agreement, as they too are essential for the process, but they are also very hit-and-miss, often irresponsibly tweeted and, other times, are simply written to piggyback another writer in order to engage readers during a time where little info is available and web traffic is slow. Writers, the prime representation of their parent publication, lock on to the best of the free agent class, or a prime trade target. Of the 127 major league signings and extensions distributed this off-season, 105 were major league free agent deals. Of that -- and this is only an estimation – about 80 players were expected to sign major league deals from the start. The likes of Edgmer Escalona and Francisco Pena sure surprised baseball when their major league agreements with Baltimore and Kansas City, respectfully, were announced. Below is another graph, this of the top trades, the corresponding reporters involved and, for fun, the amount of salary exchanged. Thirty-eight trades took place this winter, but most were of the David Lough-Danny Valencia variety rather than of the magnitude of the Ian Kinsler-Prince Fielder deal. Trades aren’t listed in any sort of order, but I picked the only deals that became relatively hot topics.

After consolidating the involvement, activity of the writers, and their reports into a an aforementioned point system, I singled out the best eighteen and graphed their score. Despite being the least active of the eighteen, Los Angeles Times’ Dylan Hernandez managed to confirm that Paul Maholm and Los Angeles were in agreement, that Dan Haren would earn $10 million, and that Chris Perez, too, would don Dodger Blue for the forthcoming campaign; we’re talking about some really great work that the game’s best writers were able to accomplish. Perez, of course, wasn’t among Dierkes’ top 50 despite managing to cross off on a one-year pact.

This is how it all adds up: 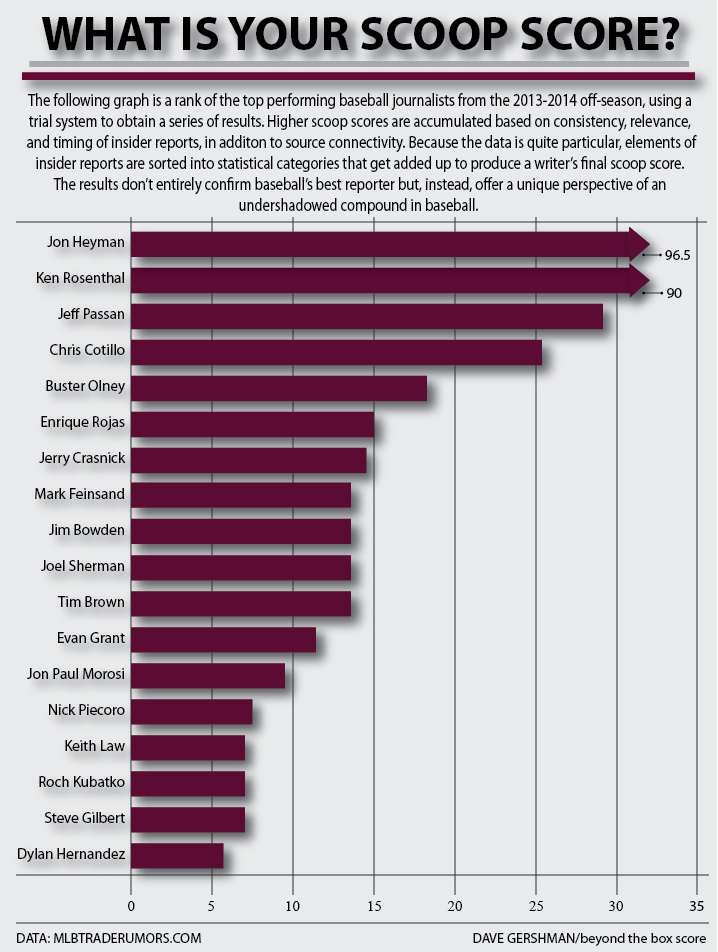 I assigned each of the eighteen writers with a "scoop score", that is essentially an accumulation of insider reports, but weighed comparatively. Writers are given four points each time they accurately report that a top 50 free agent has agreed to sign a major league deal, three-and-a-half points for a pre-detail of a signing or trade, as well as the confirmation of a trade as well, two points for the post details of a signing or trade, and one for a major league deal agreement with a player outside the top 50. I added an extra point each time a writer contributed to the report of a top-10 free agent.

This data doesn’t correlate super well year to year because extreme offseason activity changes for teams by the year, depending on needs and budget. That’s why there are so many national writers at the top; they tend to have sources with multiple teams rather than just one or two. Nick Piecoro had a big offseason this year because the Diamondbacks were busy. If the Padres had made those moves instead, he wouldn't have had the chance. The scoring system is somewhat arbitrary, but the raw data should be interesting and useful for anyone who is interested in how the offseason reporting unfolds.

Ervin Santana signed with Atlanta following the completion of this article. Mark Bowman was first to announce that a deal was close and David O’Brien confirmed the deal.

All data has been generously provided by MLBTradeRumors.com