Since being traded in July, Brandon McCarthy and Jake Peavy have altered their approach on the mound, leading to different pitch selection and better results.

Trades lead to change; that much is obvious. Players swap out old uniforms for new ones and call a different city home. And although the person sporting that new ball cap isn’t any different from the one before, sometimes these players also make on-field alterations after joining up with a new club.

Brandon McCarthy and Jake Peavy both landed with new teams prior to this season’s trade deadline, and both have modified their approach on the mound since being dealt. Neither is different per se, but they sure pitch differently.

McCarthy was an obvious buy-low candidate when the Yankees traded for him in early July. His ERA sat at 5.06, but just a glance at his FIP (3.81) and xFIP (2.88), along with his prior track record, could tell you McCarthy was a good bet to see improved results over the next couple months. Since donning pinstripes, the 31-year-old has proven to be a coup for the Yankees, improving his strikeout rate, lowering his walk rate, and posting an ERA of 2.54 in 85 innings pitched.

But McCarthy’s improvement in New York is a little more complicated than simple regression to the mean. The right-hander has altered his pitch mix, which has helped lead to sterling results:

With the Yankees, McCarthy has thrown nearly three times as many four-seamers (in 25 less innings) as he did with the Diamondbacks. He has also used his cutter 10% more and depends far less on his sinker, which wasn’t yielding good results anyhow in Arizona (.331 BA/.479 SLG allowed). These changes have seen McCarthy generate fewer ground balls and more fly balls in New York, which might feel like a risky proposition in the confines of Yankee Stadium.

On the contrary, however, McCarthy has induced weaker contact, with his BABIP dropping over 50 percentage points and his HR/FB rate shrinking in half. According to FanGraphs plate discipline data, McCarthy has seen opposing batters swing at pitches outside the zone (and overall) nearly five percent more of the time in New York, while his contact rate has decreased.

A look at his zone charts before and after the trade shows just why this might be. 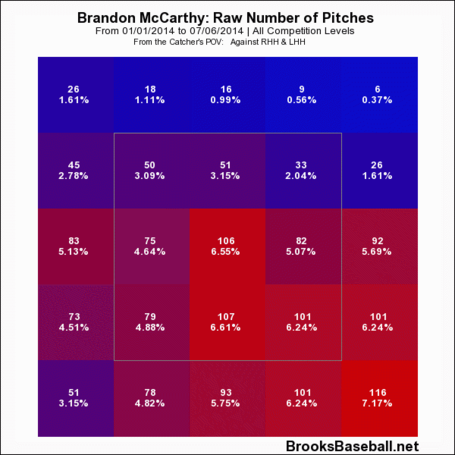 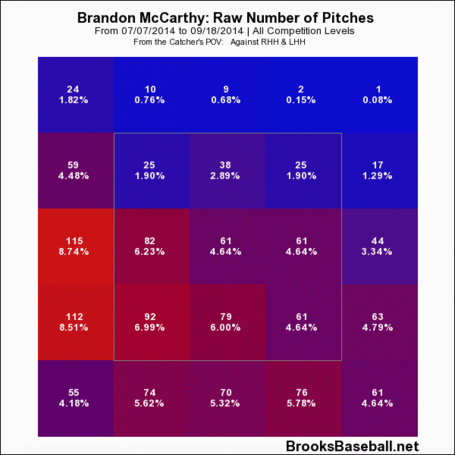 McCarthy’s overall command within the strike zone has improved, with his pitches catching far less of the plate and more of the outer edges of the zone.  This helps explain how he has generated weaker contact and achieved better results despite seeing an increase in the amount of fly balls he allows.

Jake Peavy’s changes in approach since arriving in San Francisco are remarkably similar. He too looks like a different pitcher.

Like McCarthy, Peavy has depended less on his sinker in favor of more four-seamers and cutters. The 33-year-old has also turned to his breaking balls (he throws both a curveball and slider) with greater frequency in a Giants uniform:

In a way, Peavy’s improvements have been even starker than McCarthy’s. The righty’s ERA and FIP, which sat at 4.72 and 4.79 respectively in Boston, have dropped to 2.16 and 2.75 in San Francisco. In terms of fWAR, he has been exactly twice as valuable with the Giants in half as many innings as he was with the Red Sox.

Peavy is surely benefiting from the pitcher-friendly environment of AT&T park—his HR/FB ratio sits at an unsustainable 2.7% since the trade. Even so, with the Giants he has cut his walk rate nearly in half and also increased his swinging-strike rate by nearly two percent. Simply put, Peavy is striking more batters out, walking fewer, and keeping the ball in the park, something that ultimately burned him in Boston.

Again, Peavy’s improvements have come at the expense of his sinker, which was getting crushed in his time with the Red Sox (.339 BA/.591 SLG allowed). His new approach has actually yielded a higher line-drive rate, but has also caused batters to swing at pitches outside the zone nearly eight percent more of the time in San Francisco. In a similar manner to McCarthy, Peavy has produce more swings and less contact since being traded.

Most interesting of all, both Peavy and McCarthy have excelled while using their sinkers less and less in the second half. The pitch is in vogue across Major League Baseball for its ability to keep the ball on the ground and in the ballpark; yet the sinker can also lead to inconsistent command and far too much hard contact, especially for pitchers who don’t possess dominant sinkers like Dallas Keuchel or Henderson Alvarez. Just last year, our own Neil Weinberg showed how the difficulty in controlling the sinker can come with a hidden cost.

That trades provide an opportunity for changes in scenery and approach is no secret. Sometimes a new environment and on-field modifications don’t lead to any changes in results. As McCarthy and Peavy show, however, even if the person under the new uniform is no different, sometimes the player is.