Although it won't count for anything this year, the Bronx right-hander has broken out in a meaningful way.

Share All sharing options for: The lean, mean, Shane Greene

Let's start with the obvious: The New York Yankees will, almost definitely, not make the playoffs. According to FanGraphs, they currently have the lowest wild card odds of any team not eliminated. Their offseason spending spree won't pay off, and as an Orioles fan, I couldn't be happier.

With that said, they do have some interesting pieces in place for 2015 and beyond — particularly on the pitching side. Masahiro Tanaka should return to full strength, as could Ivan Nova, Michael Pineda, and CC Sabathia (although the latter has a much lower probability of doing so, given his age and the severity of his injury). If they impress in spring training, Bryan Mitchell and Manny Banuelos may make the leap from AAA. And of course, there's the ever-reliable Hiroki Kuroda, who will probably continue to chug along; hopefully, he'll do so in pinstripes.

But in my view, the most intriguing member of the Yankees' staff is none of these men. No, that distinction belongs to Shane Greene, the 25-year-old right-hander whose debut season has turned some heads. In 68.1 innings this year, he owns an xFIP 11% better than the MLB average; if he had enough innings to qualify, that would come in at 21st in the majors — right around the level of Johnny Cueto, Cole Hamels, and Adam Wainwright. That's some pretty spectacular company to keep.

Greene's humble beginnings make his present excellence even more incredible. Not only did he never make a top prospect list, he never made a top Yankee prospect list. Before the season, prospect evaluators had him as the 27th-best in New York's system; even though that doesn't seem like an impressive ranking, he actually shot up from the year prior, in which he went outside the top 30. Suffice to say, he started from the bottom.

So how has Greene succeeded? At 8.0%, his walk rate is subpar, and it should probably be even worse — Mike Podhorzer's xBB% equation thinks it'll regress to 9.2%. Fortunately, his 23.3% strikeout rate more than makes up for any free passes he gives out; plus, he hasn't attained that one as the result of luck, as Podhorzer's xK% equation pins it at 23.3%. And, of course, a 50.5% ground ball rate doesn't hurt.

Since those formulas give expected numbers based on peripherals, they can determine the causes of said numbers as well. Greene has predicated his hegemony on punchouts, and with two main skills: looking and swinging strikes. His rates of both (29.9% and 17.7% of strikes, respectively) sit well above the major-league averages of 27.5% and 16.2%, respectively. PITCHf/x confirms the legitimacy of these: Sustained over ~100 more innings, his 59.6% Z-Swing rate would rank ninth in baseball, while his 77.0% Contact% would be 12th.

Brandon McCarthy has been better in NY this season

Did the Yankees see something in McCarthy that Arizona missed?

Brandon McCarthy has been better in NY this season

Greene's repertoire raises some eyebrows too. According to Brooks, he has thrown two pitches more than any others in his rookie campaign: the sinking fastball, and the slider. Because both of these generally have large platoon splits, you'd expect the same to be true of Greene, but it really isn't. On the season, opposite-handed hitters have a .340 wOBA against him, compared to .310 for same-handed hitters; the 1.10 platoon ratio that this produces doesn't diverge much from the MLB average of 1.05 for righties.

How has Greene defied his peripherals? Well, he has approached right-handed and left-handed batters in the same manner overall — heavily down and away: 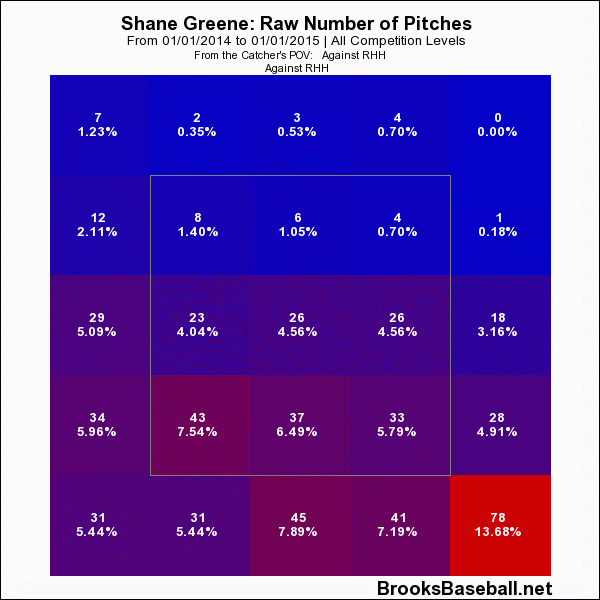 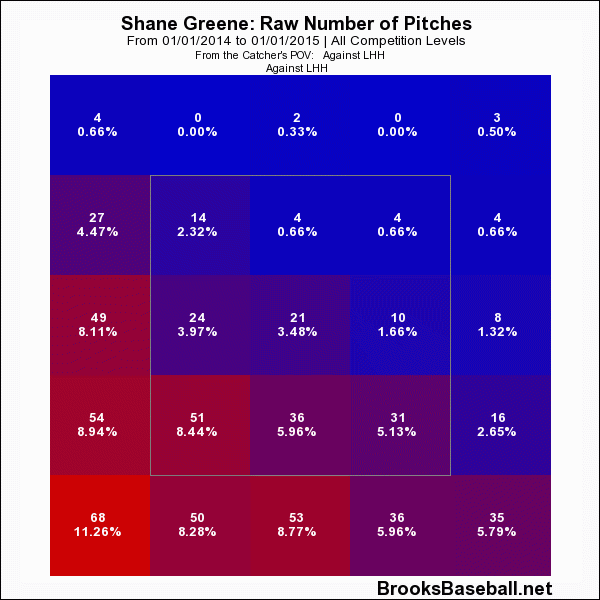 However, Greene has dominated hitters in different ways based on handedness. Once the lefties have grown accustomed to pitches outside, he's hit them with some inside stuff — and that's where he's really beaten them: 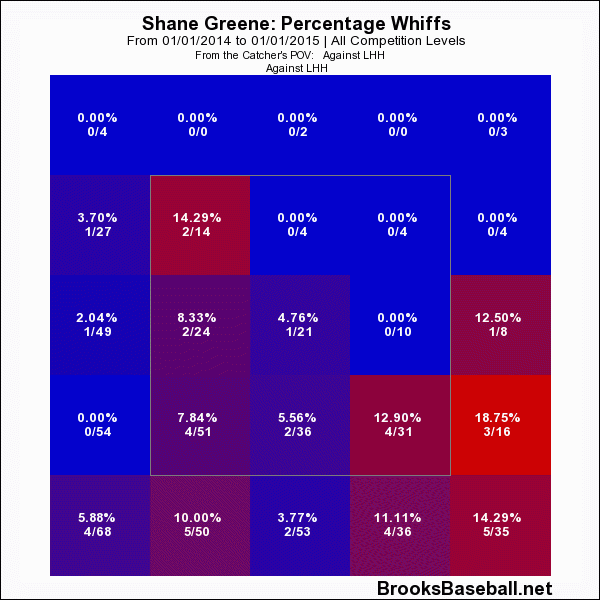 On the flip side, this means they've made contact more often on outside pitches; nonetheless, this contact hasn't hurt Greene that much, as most of it hasn't gone airborne: 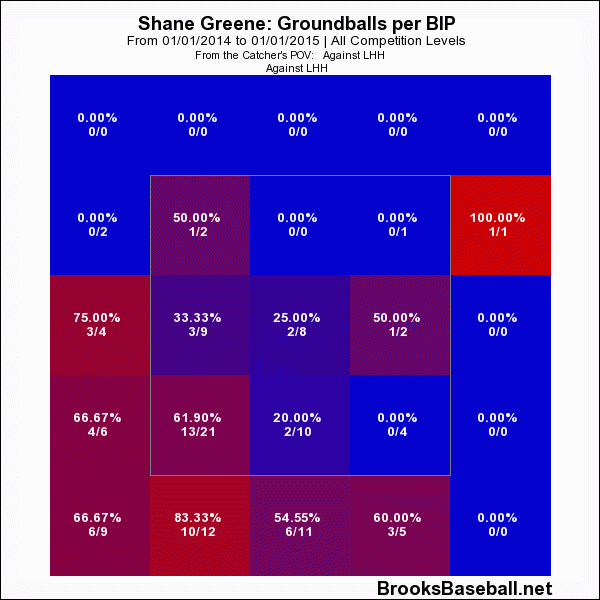 And as for righties: Greene's ample supply of pitches away to them has also deceived them well... 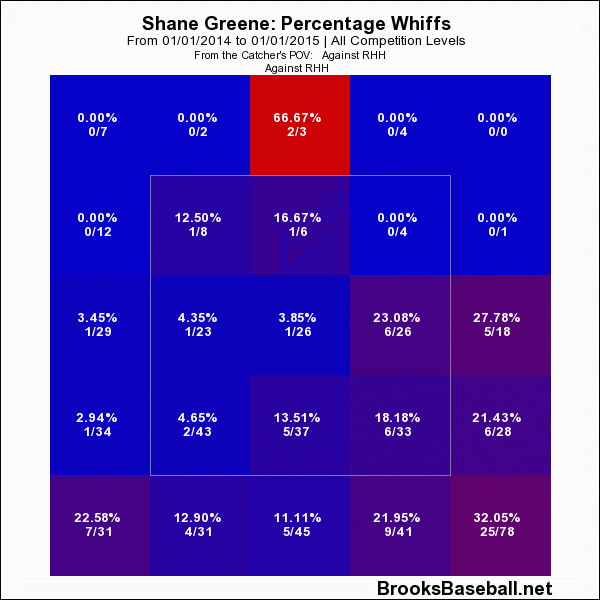 ...and when it hasn't, most of their balls in play have stayed grounded: 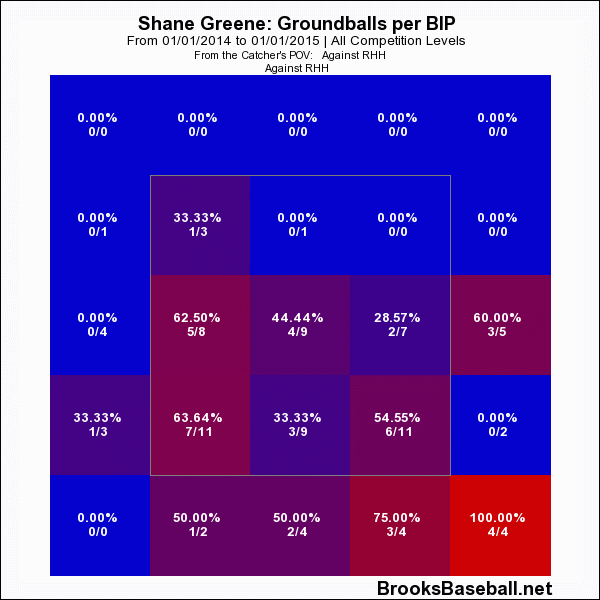 Now, for the pitches themselves. Aside from the aforementioned sinker-slider combination, Greene throws a cutter and four-seam fastball. Each of these has a usage rate of 13.2% or higher, and with one exception, all of these collect grounders at an above-average rate:

Only Greene's cutter lags behind, which makes you wonder why he relies on it so heavily (22.1% of the time). The answer lies in Greene's other area of expertise: whiffs, which the cutter provides in spades:

Depending on his cutter for swings-and-misses and on his other three pitches for grounders, Greene appears to have achieved a rather harmonious pitch balance, to which his results can testify.

2014 won't go down as a banner year in the illustrious history of the Bronx Bombers. 2015 could, though, and if it does, Greene will probably have something to do with it. From a 15th-round draft pick to a no-name prospect to a genuine major-league starter, he has traveled a winding road, but the payoff will be sweet.

All data courtesy of FanGraphs, Baseball-Reference, and Brooks Baseball, as of Sunday, September 14th, 2014.

Ryan Romano is an editor for Beyond the Box Score. He also writes about the Orioles on Birds Watcher and on Camden Chat that one time. Follow him on Twitter at @triple_r_ if you enjoy angry tweets about Maryland sports.