Flirting with destiny: Near no-hitters by inning

Jake Arrieta came close to MLB's fifth no-hitter Tuesday night before giving up a hit in the eighth. What pitchers have gone deepest into no-hit bids without ever completing one?

Share All sharing options for: Flirting with destiny: Near no-hitters by inning

On a night that two teams punched their tickets to the postseason, the baseball world was riveted by a one-sided Cubs-Reds game parsecs away from the pennant race. Jake Arrieta shone for the Cubs in Wrigley, frustrating Cincinnati hitters for seven innings until Brandon Phillips finally broke up the no-hit bid in the top of the eighth.

Arrieta has come into his own this year in Chicago, and this is not the first time he's come close to a no-hitter. It seems like only a matter of time before the ball finally bounces his way:

How many more no-hit bids until we just give one to Arrieta?

Luck plays a big role in any no-hitter, of course; this, coupled with the recent offensive slowdown, has caused certain sabermetric websites to ask if the no-hitter is losing its charm.

Not for me. A no-hit bid is a way to turn an average day at the park into one for the ages. Put another way, the Marlins don't sell unused tickets after the fact for all of their games.

So I wanted to see what kind of company Arrieta was in with his "missed-it-by-that-much" performance Tuesday night. Using a Retrosheet database, I compiled every game since 1940 in which a starter had a no-hitter going after 5, 6, 7, and 8 innings. (Note that, since I relied on Retrosheet, these numbers don't include 2014.)

It seems obvious that Nolan Ryan, he of the seven career no-hitters, would be atop this leaderboard. What was not obvious (at least to me) was the sheer number of times Ryan approached a no-hitter, far greater than anybody else on this list.

Let's make a separate table for those pitchers who came close the most times, but never broke through.

You don't see Arrieta's name on these leaderboards yet (he has one no-hit bid in our database, holding the Rays hitless over five in 2011). But you do see an eclectic mix of names. Look at the leaders after seven innings: four current or future Hall of Famers, and two guys who gave up two of the most famous home runs in baseball history. And don't forget, two of the leaders after eight kind of had no-hitters - Martinez and Haddix both threw nine perfect innings but gave up hits when the game went to extra frames.

When is this flirtation with destiny most likely? You might think that, with the decline of offense in the "post-steroid" era, we would see a massive increase over the last four years. This isn't clear in the number of no-hitters completed, but it does show up in the number of no-hit bids after five and six innings. In 2011, for example, there were 84 no-hit bids still alive after the fifth inning, the highest number since the 92 recorded in that infamous "year of the pitcher," 1968. 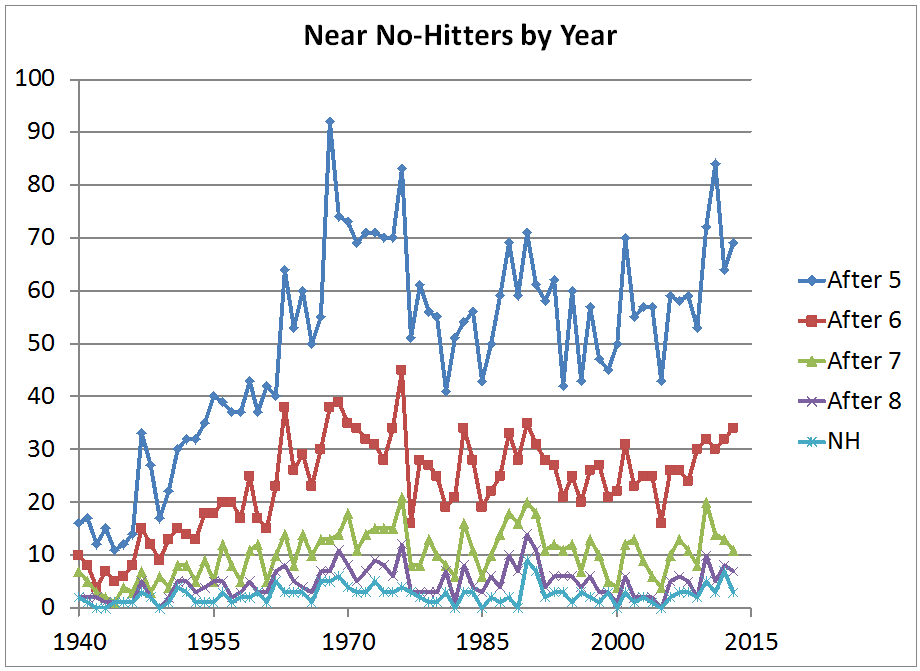 You might also think that more pitchers would come close to a no-hitter in April and September, when cold weather suppresses offense, but that doesn't seem to be the case. We do see a spike in September, which might be explained by the expanded rosters that lead to more plate appearances for lower-quality hitters and new pitchers whose deliveries can fool hitters seeing them for the first time. 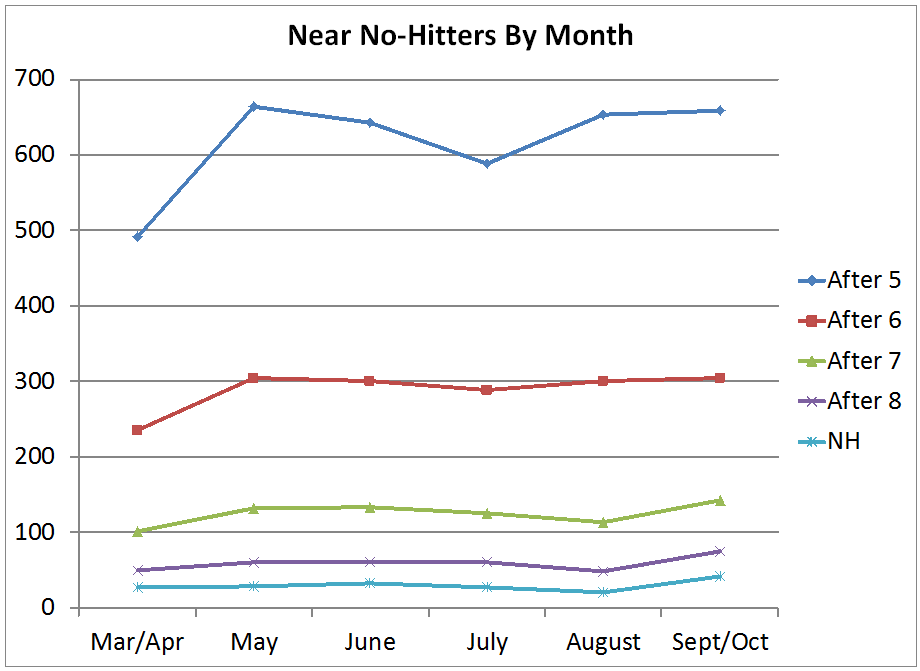 In an age of depressed offense, getting through a couple innings with a blank slate is happening more and more frequently. (Mike Fiers threw 5.2 no-hit innings against the Cardinals in a 2-0 losing effort just last night.) So next time Twitter is buzzing about someone's attempt at history, you might want to give it an extra inning before you start paying close attention.

Bryan Cole is a featured writer for Beyond the Box Score whose favorite no-hitter is Matt Young's 2-1 loss to the Indians. You can follow him on Twitter at @Doctor_Bryan.