Phil Hughes' resurgence came out of nowhere. How did he go from being a below average pitcher to one of the best in the game?

Before the 2014 season, Phil Hughes' career was filled with inconsistency. In 2007, Hughes was rated as the Yankees' number one prospect and the fourth prospect in all of baseball. Expectations were high to say the least. From 2007-2009, Hughes jumped between the rotation and the bullpen and had difficulty with various injuries.

2010 was the first season when he pitched a full season, and the results were essentially average across the board. His ERA- and FIP- were 98 and 99 respectively. He struck out batters 20% of the time, which was a tick above league average, and walked a league average 8% of batters. The next three seasons were filled with injuries and much worse results. It didn't appear as if Hughes would live up to the hype at all.

Then Hughes became a free agent and signed a three year, $24 million dollar deal with the Twins. He's been a completely different pitcher ever since. He's posting career highs in strikeout percentage, as well as walk percentage. His home run per fly ball rate is also the lowest in his career.

Right off the bat we can see that Hughes is ranked with some of the best pitchers in the game. As of this post, his fWAR is better than Chris Sale and former AL Cy Young Winner Max Scherzer. Currently Hughes has the third best FIP- in all of baseball with only Chris Sale and Clayton Kershaw ahead of him. He also has the lowest BB% among everyone in this group. Only Michael Pineda, who's thrown only 57 innings, has a lower BB%. Now that we've seen that Hughes is one of the best starters in 2014, let's see just how he got there.

During the offseason, Hughes announced that he would be getting rid of his slider and he would be replacing it with a cutter. Bringing back the cutter has played an important role in his success throughout the year. After his four seam fastball, his cutter is his most used pitch. He throws it just over 20%, as you can see on the graph below. Batters are not faring well when he uses it either. Hitters are connecting for only a .223 batting average and a .113 ISO. Hughes is also generating whiffs over 25 with his cutter, which is always a big help. 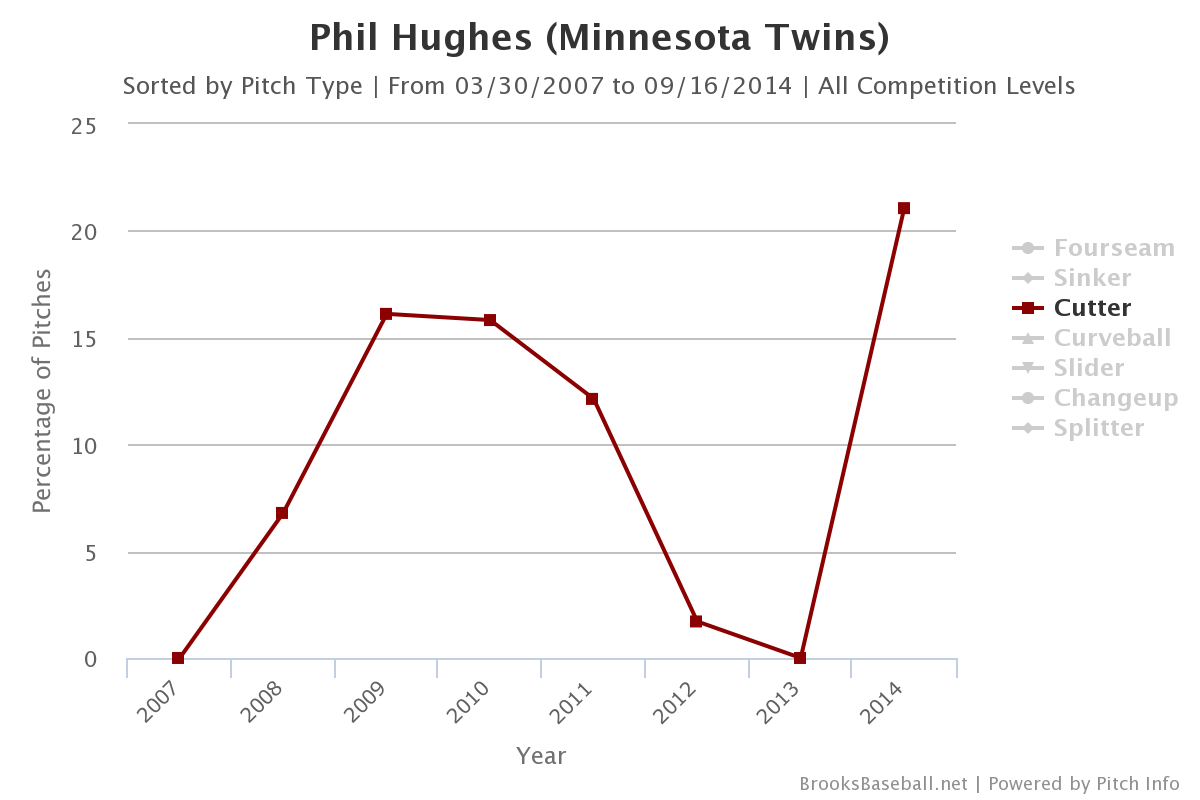 Hughes has also found some new success with his fastball. He's seen fewer fly balls when he's thrown it this year, and his ISO against has also dropped to a career low. The line drives and ground balls have remained fairly similar; regardless, it has not hindered his success in 2014.

Last week, I examined how Phil Hughes might be using the concepts of effective velocity to his advantage this year. I dive in more deeply this week

Not only is Hughes' success story huge for him, but it's also something that the Twins desperately need. During the off-season, they took fairly decent size gambles on both Ricky Nolasco and Phil Hughes, and while the Nolasco one has been pretty bad, it's been great to see Hughes finally figure it out. Even with his breakout year, the Twins have still been miserable, but that's a story for another day.

It'll be interesting to see how Hughes does next season when he begins his second year at Target Field. He's only 28 years old, and while it's possible that he starts right where he left off, I wouldn't count on it. For many pitchers, this is about as good of an individual season as you'd want, so regression seems imminent.

Alex Kienholz is a writer at Beyond the Box Score. You can follow him on Twitter: @Alex_Kienholz