The hidden cost of the sinker

Doug Fister's strange season is giving us reason to reconsider the hit by pitch.

Share All sharing options for: The hidden cost of the sinker

Doug Fister is working on a peculiar kind of history. He's not working on a strikeout record or a scoreless innings streak, but something that's actually probably more impressive for its rarity. Fister is hitting a ton of batters. A historic number of batters, in fact, for someone who walks as few as he does.

Entering today's start, Fister has walked only 11 more batters than he has hit during the 2013 season (26 BB to 15 HBP), which is just five behind Carlos Silva's all time record from 2005 when he walked nine (!) and hit three. It's an impressive record that he's chasing, but a raw differential can be misleading. Walking 40 and hitting 35 is different from walking five and hitting zero.

So while Fister's chase at the HBP to BB record is of note, it's also better practice to consider rate statistics. Just for reference, let's take a look at HBP% and BB% for every qualifying season by a starter from 1916 up through August 7, 2013 (the day of Fister's most recent start). 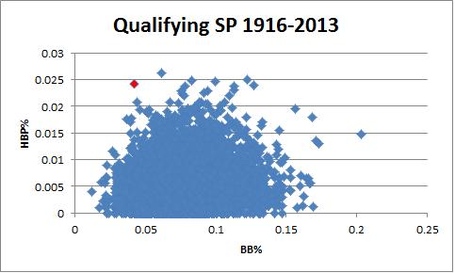 On the right of the image, you see several points that identify pitchers with normal HBP rates and really strange walk rates. They're probably interesting, but not our focus here. This article is about the points at the top of the graph. Fister (marked in red) is interesting because he has the highest HBP rate of anyone with such a low walk rate, but his HBP rate is also close to the MLB record. He has the sixth highest HBP rate in MLB history despite a walk rate below 5%.

We generally think there are two reasons why a pitcher would hit a batter. The first is obviously intent, while the second is a pitcher lacking control. Here we have Doug Fister throwing a wrench in that idea. He has some of the best command in baseball and he's hitting guys like he's playing kickball and they're running the bases.

Fister's historic pace is remarkable in itself but the fact that he's anywhere close to the record is interesting, because it challenges a basic assumption we have about who hits batters. Using data from 2008 to 2012 (the PITCHf/x era), I think we can identify an additional cause of hit batters beyond a lack of control. 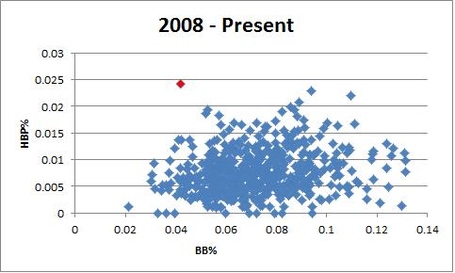 So Fister is some sort of preposterous outlier, but there are points on the graph that would look strange if not for Fister. Let's look at pitchers who walked fewer than 7% of their batters (8-9% is league average during this period) and hit more than 1.5% (0.7% is league average) to make sure we're looking at pitchers who clearly have below and above average rates, respectively.

Among the outliers, Fister has walked the fewest and hit the most, but you knew that from the graph. What jumps out at me about this list is that a good portion of the players are known for their sinker or two-seam fastball. Below is the same list of players sorted by how often PITCHf/x says they threw a two-seam fastball and how much it broke horizontally.

PITCHf/x classifications aren't perfect, so there is definitely some error involved, but you'll notice several pitchers on our list of low walk, high hit by pitch starters throw a lot of two seam fastballs and those pitches move quite a bit. Since 2010, somewhere between 10-14% of pitches were classified as two seam fastballs and four pitchers on this list threw two and three times as many.

Maybe this conclusion is obvious, but it's not something you hear discussed very often. When we talk about hit batters, we generally think of pitchers who are "sending a message" and pitchers who have no idea where the baseball is going. For example, in 2008, Daniel Cabrera fell into the latter category as he hit 2.2% of the batters he faced but also walked 11%.

What we've seen here is that -- on rare occasions -- pitchers with great control manage to hit a ton of guys, likely because they have so much life on their fastball. Not only are these pitches likely to run in on hitters, but they're also the hardest to avoid because they're breaking in on batters at the very end, rather than heading for them from the moment of release.

The takeaway is that hitting batters isn't always about lacking control. There's a class of pitchers who hit batters because their fastball has excellent life on it and runs in on hitters who struggle to avoid it. Take it a step further and recognize that it's likely best to consider joint walk and hit batter rate when thinking about how many free passes a pitcher allows. We combine them in FIP, xFIP, and wOBA-based stats, and we should do so when taking about walk rate in general. Pitchers are responsible for hitting batters and we're doing ourselves a disservice to push those plunkings to the background.

Fister's run at history is compelling because he's out on an island, but it's also instructive. He is hitting almost a batter every nine innings and we're treating it like it's some quirky, random event when it likely isn't. We love pitchers with great sinkers who can induce a lot of ground balls, but there is a hidden trade off we haven't fully considered. Lucky for us, Fister isn't letting us ignore it any longer.