Glen Perkins and his barking elbow

Glen Perkins has been shut down for the rest of the season due to a forearm strain and nerve irritation. We discuss what structures played a role in his injury and how it affected his pitching.

Share All sharing options for: Glen Perkins and his barking elbow

In a situation that appears to be the lesser of many evils, Minnesota Twins closer Glen Perkins has been shut down for the remainder of the season due to a left forearm strain with nerve irritation. After many weeks and diagnostic tests to get to the root of a number of complaints, which included tingling and occasional pain in the neck, shoulder, biceps, elbow, and forearm, it appears that any foreboding conditions in the shoulder and neck have been ruled out and an MRI performed on the lefthander's elbow showed a 'perfect' ulnar collateral ligament, per Twins Medical Director Dr. John Steubs. What the MRI also showed was the aforementioned strain and nerve inflammation, something that Perkins has suffered on a number of occasions over the past few seasons; rest, physical therapy, and a slow return to baseball activities appear to be the course of treatment, which bodes well for Perkins being ready for spring training.

Despite an intact UCL, the muscle strain with nerve irritation is nevertheless a cause for some mild concern, especially given the condition occurs frequently for Perkins. While sources do not directly name the muscle or muscles involved in this situation, we can put on our sleuthing caps* and briefly review some anatomy to determine what exactly is at risk. First, given the nature of baseball injuries of the elbow and particularly in pitching, neurologically, we are dealing with the ulnar nerve. Given that, we can slim down the forearm muscles of interest to the few that are innervated by the ulnar nerve - the flexor digitorum profundus (FDP) and the flexor carpi ulnaris (FCU). Both muscles flex the wrist, with the FDP also responsible for flexing the fingers at the metacarpophalangeal and interphalangeal joints and the FCU for adducting the wrist. Knowing that the nerve irritation was secondary to the muscle strain, we can pinpoint the muscle and possibly the ultimate condition that Perkins has been suffering: ulnar neuritis — also called cubital tunnel syndrome — arising from the strain and inflammation of the FCU, as well as other soft tissue inflammation.

Cubital tunnel syndrome (CTS) arises from the stretching, compression, or irritation of the ulnar nerve within the cubital tunnel, the bony groove the ulnar nerve travels through as it courses down from the upper arm into the forearm and on to the wrist and hand. Anatomical landmarks of the cubital tunnel include the medial epicondyle, the olecranon process, as well as the humeral and ulnar heads of the FCU; in Perkins' case, inflammation of the muscle heads created a compressive force pushing the ulnar nerve down into the bony structures of the cubital tunnel, causing the tingling and discomfort experienced, which can be expected to be primarily of the ring and little finger of his left hand. Looking at Perkins' Baseball Prospectus injury card, we find him suffering from this condition previously in 2009, adding a modicum of confirmation that this condition is fairly chronic in nature for the Twins' hurler.

From a pitching perspective, this condition has caused some issues, many of which highlighted in a great article by Parker Hageman over at Twins Daily. In particular, a slight decrease in fastball velocity combined with some loss of command of his slider has plagued Perkins in recent weeks, especially in the month of August. I encourage the reader to take a look at Hageman's piece, especially the strike zone heat map of the slider; in the same vein, I have broken down Perkins' slider location into three categories through Brooks Baseball: season up to August, August, and September:

This trend of loss of command is most obvious in the month of August, with some return to his usual ways in the handful of games pitched in September; his percent usage across the three categories sees Perkins using the slider 24.6% of the time up to the month of August, 34.4% in August, and 16.47% in September, perhaps indicative of his lack of confidence in and his ability to locate the pitch. Overall, we find the slider to be up in the zone when Perkins was in the midst of dealing with the forearm strain and nerve irritation.

Fastball command across the same three timeframes shows a similar trend, with Perkins also appearing to miss well off the plate up and away to lefties and up and in to righties especially in later games:

With the PITCHf/x data and a good idea of the anatomical underpinnings of Perkins' injury, we now have a better idea of what the closer endured. As Perkins's forearm strain worsened and caused nerve irritation, his ability to firmly grip the baseball, both in terms of sensory and motor components, faded. This lack of tactile feedback due to the tingling plays a role, as does the secondary effects of the ulnar irritation on the FDP and their role in flexing the fingers when gripping a ball. Also of interest is the trend in arm slot across the season for Perkins; first, the horizontal component of his release point: 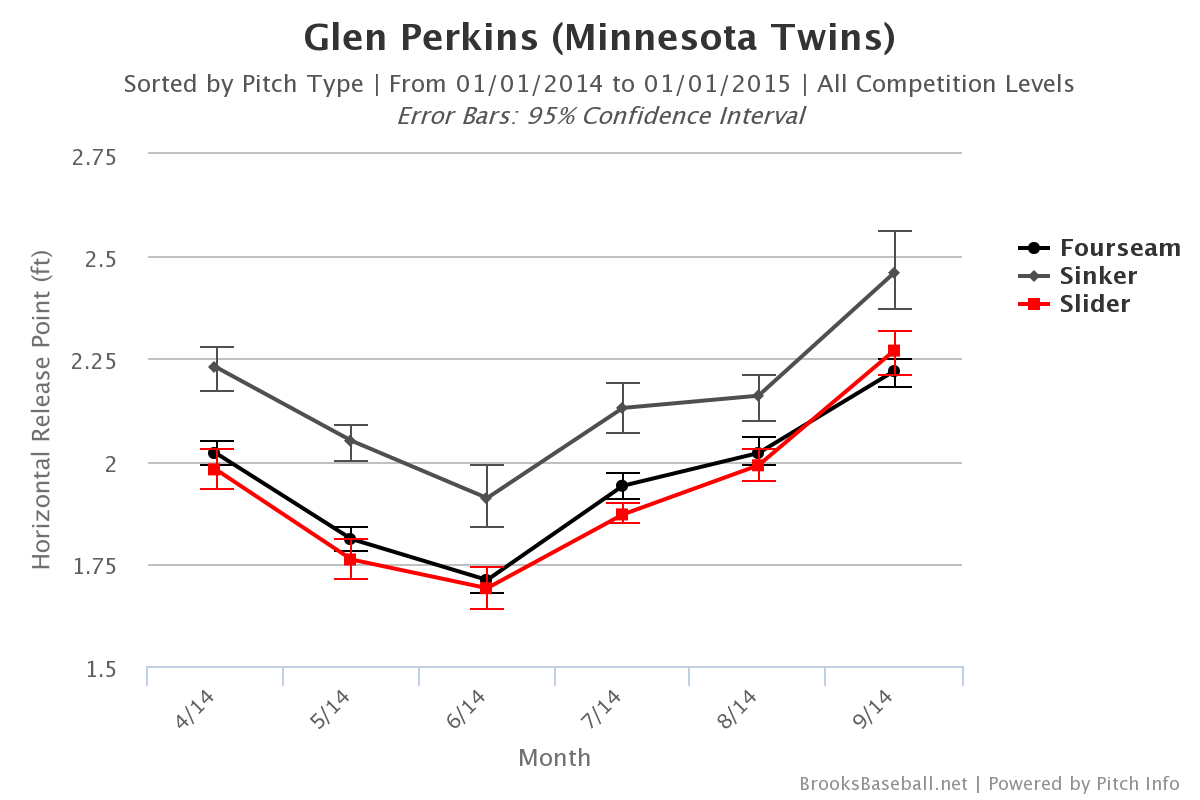 ...and the vertical component: 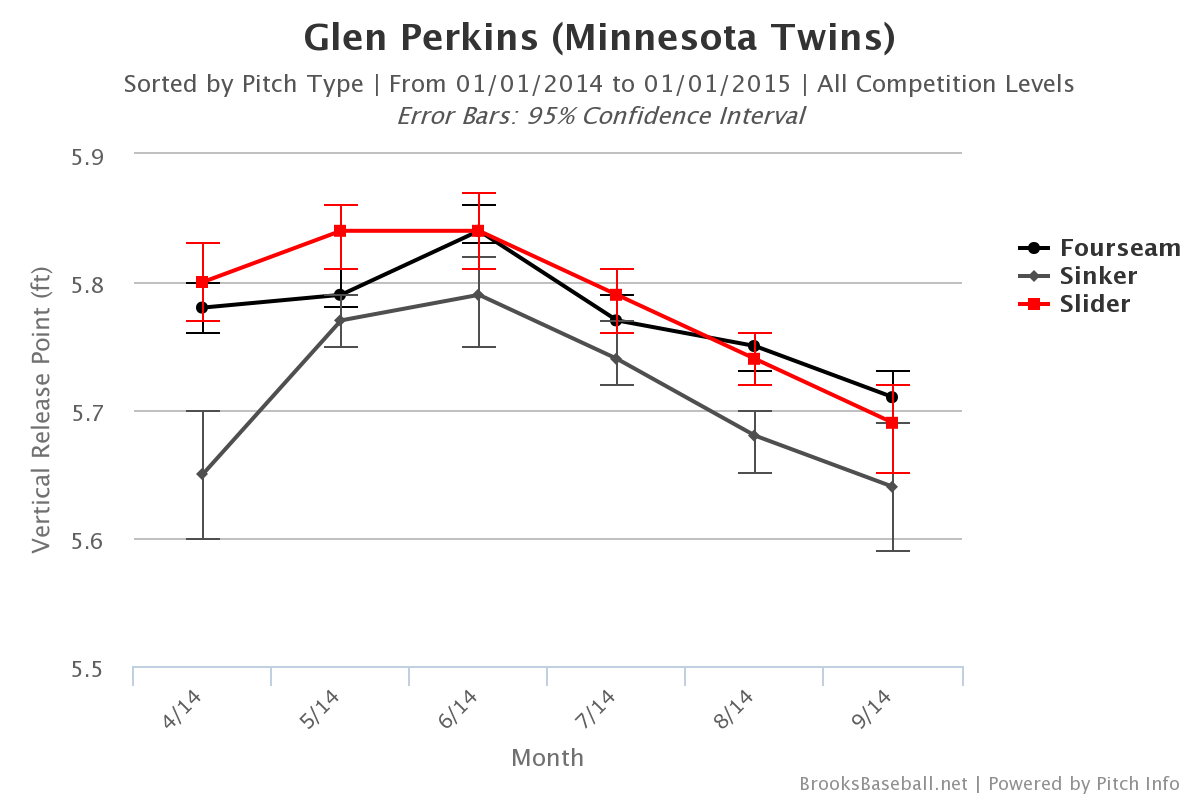 Here, we see the possible effects of the barking elbow on his release point. With the inflammation of the forearm muscle(s), comes the nerve irritation; with the pain and irritation comes compensatory actions, in the form of a lowering of the arm slot and the hand being further away from the body at ball release. It's a subtle trend, but one that could also lend itself to continued pain and irritation, due to the excessive forces on the elbow joint at such a low arm slot, one that is somewhat unnatural for Perkins.

Overall, Perkins should be ready to go for next season; with the clean bill of health in terms of the UCL, fears that a Tommy John procedure is inevitable should be allayed, even with the knowledge that 40% of baseball players presenting with UCL injuries demonstrate symptoms consistent with ulnar neuritis.

Stuart Wallace is an editor and writer at Beyond The Box Score. You can follow him on Twitter at @TClippardsSpecs.