Every year, some players exceed their projected production level. Who are 2014's most unexpected players as we approach the halfway point?

Prediction is difficult, especially about the future.

There's been a lot of discussion about projection systems lately. Managing Editor Bryan Grosnick has recently detailed the tale of Kevin Kiermaier and looked at high projections in the Oliver system.

Regardless of the projection system, some players will exceed their projection, some will fall short. Last year, Chris Davis exceeded expectations the most, while Jeff Keppinger fell short the most. As with last year, we're working with Dan Szymborski's (I got the name right this year) ZiPS projection system, but we're adding another wrinkle. FanGraphs has a Fans Scouting Report where fans can try to project how they think players will do in the coming year. Just to prove that Niels / Yogi were right, we're going to show how the fans do.

The table below shows the 166 qualified players, along with their projected wOBA by the Fans and by ZiPS. Then, there's the probability that we'd see a season better than the one they're having given that the projection system is correct. The lower this probability, the more they've exceeded expectations. Data is current through June 22nd.

Michael Brantley definitely has surprised people, but there are plenty of familiar names at the top of the list in Victor Martinez, Troy Tulowitzki, and Carlos Gomez. Tulowitzki's season continues to impress. Consider that he was projected to have the seventh-highest wOBA on the year, and yet has had such an incredible year that his was the third-least likely season based on preseason projections.

On the other end of the spectrum, to say that Domonic Brown has had a tough season would be an understatement. Some thought he seemed primed for a potential breakthrough, but he hasn't been able to build off of his 2013 season. (As his owner in the BtBS Ottoneu League, I find this very unfortunate.) Joining him at the bottom are a former MVP in Joe Mauer and a quartet of All-Stars in Swisher, McCann, Ortiz, and Segura.

One final thing to consider in projections is whether they have a tendency to overshoot or undershoot as a general rule. A good projection system would be symmetric about 0.5 in terms of P (Better Season than Actual | Projections), as well as being mostly near 0.5. Below you'll see ZiPS has the symmetric property while the Fans ... well ... don't. As a general rule, fans are overestimating players by quite a bit. But even ZiPS has a hard time getting the projections dead on. Just a reminder that Niels / Yogi were right. 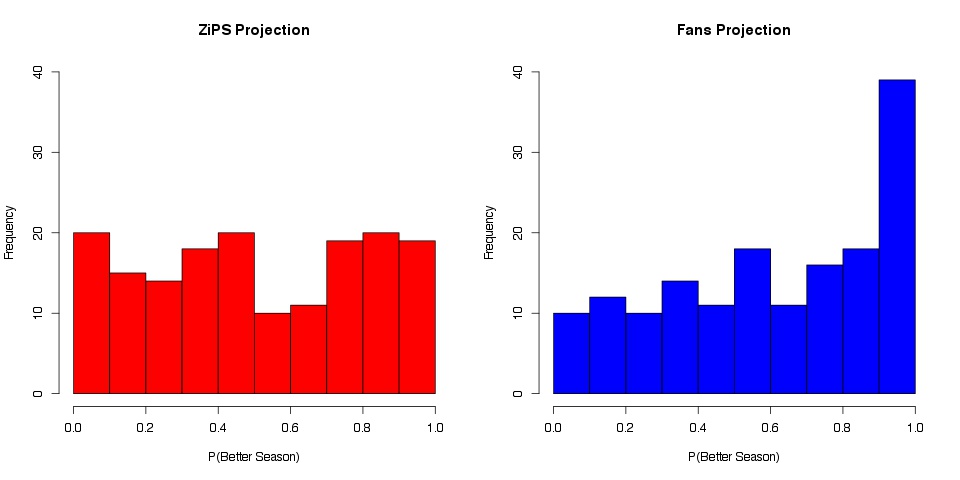 Data and projections courtesy of FanGraphs.