There has been precious little written on these pages about arguably the most surprising and exciting pitcher in baseball this season: Masahiro Tanaka. When the Yankees signed Tanaka after being posted by the Tohoku Rakuten Golden Eagles of NPB there were differing opinions on how he would far in MLB. Many thought he didn't have the swing and miss stuff of his country-mate Yu Darvish and that his success would be limited as a result.

Oh, how wrong those predictions were. Tanaka has been excellent and he's struck out more batters than any other starting pitcher not named Yu Darvish. While Darvish may always be the strikeout king of baseball, Tanaka has shown that he too can strike batters out with ease. Not only that, but Tanaka is also a master at limiting walks, with seven batters struck out for every one that he walks. His K/BB ratio is second best in baseball to David Price, and his K%-BB% is also second best behind the Rays' ace. Tanaka was also the only American League pitcher with an ERA under 2.00 until the Orioles managed to score 3 runs off of him in his most recent start.

Tanaka is very good, and it's mostly because of his splitter.

Don't get me wrong. He has other very good pitches as well. In fact, Tanaka is cut from the same mold as Darvish, likely a remnant of their upbringing in Japan and early professional careers in NPB as both pitchers have at least 7 distinct pitches in their arsenals (Darvish has 8 if you count the slow curve and curve separately). Tanaka throws four pitches more than 80% of the time, though, and they make up the bulk of his repertoire.

His sinker is the least thrown of his main set of pitches, and Tanaka uses it 18.63% of the time. Next is the slider which Tanaka throws 21.02% of the time (though he's twice as likely to throw this against a righty). His second most commonly thrown pitch is his four-seam fastball which comes in at 23.87%. Finally, the pièce de résistance, his splitter which he throws 25.86% of the time.

It might be controversial to call Tanaka's splitter the best in baseball. There are many other pitchers who throw a splitter that could lay claim to that title, but I'll defend Tanaka's right to the throne here in several ways. Let's take a quick look at some of the competitors and how they stack up to Tanaka:

You can see from the chart above that a few other pitchers can possibly lay claim to having a better splitter than Tanaka. Nobody has thrown as many as he has this season, and nobody gets opposing hitters to swing at their splitter like Tanaka does. His whiff rate is also second to that of Joaquin Benoit, who happens to be a reliever and rarely throws more than 1 inning. Speaking of Benoit, he only gets 1.33 ground balls for every fly ball off the pitch, so when he doesn't get a whiff the pitch isn't getting ground balls like it is supposed to.

At the other end, Hisashi Iwakuma is the best in the business at getting ground balls with his splitter, and they come at 12.33 times the rate as fly balls do off the pitch. However, he gets very few whiffs, so his splitter is garnering weak contact rather than swings and misses. Tanaka's splitter, though, does both.

More than 64% of Tanaka's splitters spur the opposing batter to take a swing at the pitch. Meanwhile only 18.71% of those pitches are in the strike zone. One possible reason for this is that Tanaka's splitter has such late break that it looks like his four-seam fastball until it's too late for the hitter to adjust. Take a look at this heat map which highlights the locations of Tanaka's splitter to date: 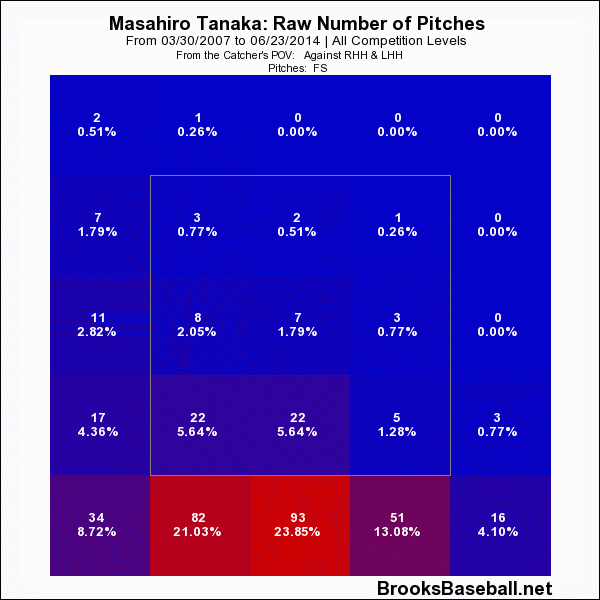 As you can clearly see, the splitter is almost always thrown below the strike zone, with less than 20% of the offerings actually ending in the strike zone. Below I've included a few GIFs of Tanaka striking out opposing hitters with his splitter. There are a couple of reasons I've chosen these GIFs specifically. First, they're all from the same game. You know that the batters were expecting it. They had seen their teammates strike out on it earlier, and still had no chance. A few of them also show just how deceptive the pitch can be, with the reactions from the hitters showing that they were truly fooled:

Here Tanaka's splitter makes righty-crusher Chris Davis look mediocre. Davis doesn't even come close to making contact as Tanaka gets the strikeout on the 87 mph splitter that drops out of the zone. The next GIF comes from the following inning where Tanaka utterly fools Caleb Joseph on a 3-2 splitter in the zone:

Joseph isn't the same quality hitter as Davis, but he's a professional baseball hitter nonetheless. Joseph cuts off his swing as he realizes that he had no shot at hitting Tanaka's pitch. Obviously Tanaka had a ton of confidence in the pitch, exhibited by throwing it on 3-2. As I've outlined above he has good reason to trust in the pitch.

Masahiro Tanaka has truly been a treat to watch. Many are compelled to compare him to Hiroki Kuroda or Yu Darvish, both successful MLB pitchers who made the transition from NPB. Tanaka, though, is neither pitcher, even if his arsenal is similar to Kuroda's and his strikeout potential is Darvish-esque.

Only time will tell if MLB hitters can adjust to Tanaka's splitter. My suspicion is that they won't be able to, at least for some time. There's about a 45% chance that any given pitch you'll see from Tanaka is a four-seamer or a splitter. The problem for opposing hitters is that both pitches look exactly the same until it's too late to adjust for one or the other. With hitters guessing at what his next pitch might be, Tanaka and his splitter are poised to continue their domination of the American League.