Jordan Zimmermann is getting better

Perpetually pitching in the shadow of Stephen Strasburg, Jordan Zimmermann has been a model of consistency for the Nationals in recent seasons—and he's only getting better.

Share All sharing options for: Jordan Zimmermann is getting better

Consistency isn't the most enthralling attribute a pitcher can have, which must be why Nationals starter Jordan Zimmermann flies so far under the radar.

The 28-year-old has long formed an effective pair with Stephen Strasburg at the top of Washington's rotation, but while Strasburg has gotten all the accolades since arriving in the majors, Zimmermann has quietly gone about his business with startling dependability.

Zimmermann doesn't boast a high-90s heater like his more heralded teammate, nor does he flummox hitters with the type of knee-buckling breaking stuff that makes for easily digestible GIF material. He instead attacks batters with four above-average pitches, avoids surrendering free passes, and keeps the ball in the ballpark—nothing flashy, but certainly successful.

Even so, Zimmermann's consistency has been remarkable, with his numbers fluctuating little from season-to-season over the past four years:

The right-hander's ERA has remained between 2.94 and 3.25 for four straight seasons now, while his walk and strikeout rates (along with just about everything else) have hardly changed over that time period either.

As Zimmermann showed Tuesday night against the Brewers, though, he is improving upon his already impressive track record. Zimmerman struck out nine Milwaukee batters, including six of the first nine he faced, while allowing six hits and two earned runs.

The righty's final line wasn't overly remarkable, but the manner in which he approached the Brewers showed a pitcher who is evolving and has found new ways to be successful. This wasn't the Zimmermann you might expect by reputation; rather this was a pitcher who was aggressive in attacking the strike zone, especially with his fastball, which isn't known for being a dominant pitch.

Against the Brewers Tuesday, Zimmermann's fastball averaged 94.4 mph as he garnered 11 whiffs with the offering.

Even more noteworthy, Zimmermann pounded the upper portion of the strike zone with his heater, continuing a trend that has led to more strikeouts and better success in 2014.

As this zone chart of Zimmermann's fastball location from 2011-2013 shows, the Nationals hurler has never been afraid to throw his fastball for strikes: 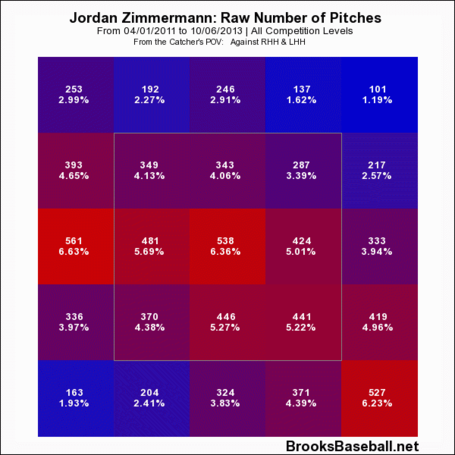 But Zimmermann now rarely pitches in the lower part of the zone with his fastball, a change that has led him to use the upper portion of the zone to generate more whiffs and weak contact, often in the form of infield fly balls (his 12.2% IFFB% is fourth-highest in the NL). Here is how Zimmermann has used his fastball in 2014: 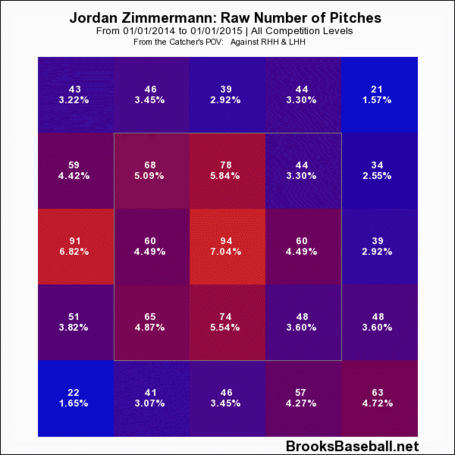 As Zimmermann's fastball has improved (he is currently generating career-high marks in whiff percentage, whiff/swing percentage, and batting average against with the pitch), so too has his overall ability to get strikeouts. His 20.7% strikeout rate and 10.2% swinging-strike rate stand as career bests.

With his current contract set to expire after 2015, the Nationals will have a decision regarding whether they want to lock up Zimmermann to an extension in the months ahead.

He will never be Strasburg, but that doesn't mean Zimmermann isn't a vital part of the club's core in Washington. With his strikeout rate, groundball rate, and FIP all the best of his career, Zimmermann will be in for a payday no matter what the Nationals decide to do.