With so much focus on his arm (and elbow), Stephen Strasburg has made a mechanical tweak with his feet that's gone mostly unnoticed and one that probably should have been made sooner.

It's a minor tweak, but in many respects, one that could make the future prospects of Washington Nationals ace Stephen Strasburg brighter, and perhaps, more attainable. In a game where the predominant unit of measure is feet, a shift of inches has been made by one of the most scrutinized pitchers of his era...with his feet.

As discussed in Adam Kilgore's recent piece over at the Washington Post, Strasburg has recently moved the position of his pivot foot—the back foot that is in contact with the pitching rubber—so that the outside of his right foot is contact with the rubber. Previous to this, he had half of his pivot foot sitting atop the rubber, with the inside half on the dirt in front of the rubber. In the picture above, this half-on, half-off foot placement can be appreciated. After some discussion with pitching coach Steve McCatty and further inspiration from pitching contemporaries known for their impeccable control (such as Cliff Lee and rotation mate Jordan Zimmermann) who place their entire foot next to the rubber, Strasburg made the roughly two inch shift, in an effort to improve not only his mechanics, but the consistency and command of his pitch repertoire. To quote Strasburg:

I never really wanted to change it [his foot location], because things were going well. I just got to the point where I was like, ‘I think this would help with my development and make me a better pitcher.’ I didn’t feel comfortable at first. Working at in between starts, it’s just become second nature.

...and a visual confirmation of the change, showing his pivot foot flush with the rubber: 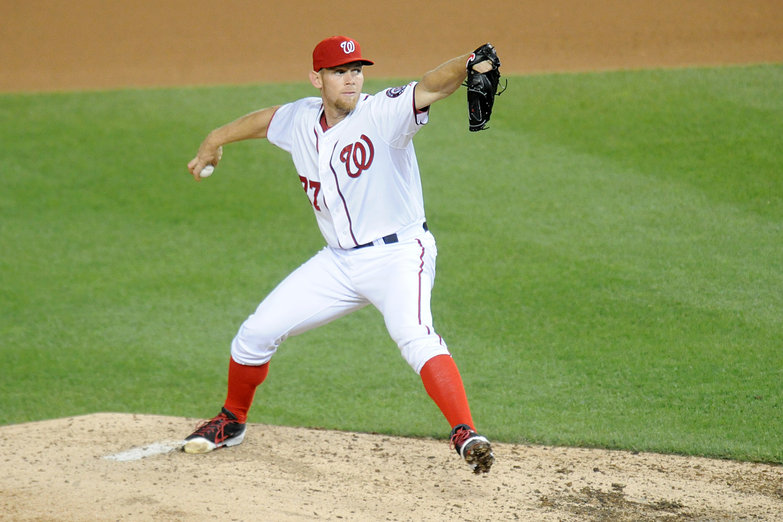 Like many aspects of pitching mechanics, the half-on/half-off the rubber foot placement was done in an effort to generate more power and more velocity, at the expense of long term health, with the assumption that wedging his pivot foot in this fashion would allow for a better 'push' off of the rubber, which in turn would optimize velocity. However, this podiatric quirk sapped Strasburg (and all pitchers who utilize it) of one of the most crucial aspects of good pitching mechanics: balance.

Looking at Strasburg's mechanics and pitch delivery through the lens of the kinetic chain, we find the pivot foot to be a crucial piece of the puzzle very early on in the mechanics of throwing as an initiator of power transfer from the lower half up into the arm. Active primarily in the wind-up and early cocking phases of pitching, the pivot foot is important for the optimization of body alignment, the initiation of momentum towards the plate, as well as balance; with this balance comes proper maintenance of an athletic position as the pitcher kicks his front—or stride—leg and his center of gravity rises, with a concomitant activation of the hip abductor muscles in order to control pelvic movement. Doing this on a flat surface is challenging enough, but requires even more concentration and athleticism to do this essentially on a slanted surface, in the form of the aforementioned half-on, half-off pivot foot placement. In this position, ideal levels of momentum and balance are never achieved and in some respects, a fluid sequence of energy transfer through the various points of the kinetic chain is never truly achieved, with asymmetries between the lower and upper half of the body during the act of pitching encountered. In this position, the pitcher's body weight once the stride foot is lifted up (during early cocking phase) instead of being equally dispersed throughout the bottom of his foot is now located more medially, in a smaller surface area, creating issues with balance and with timing further down the kinetic chain. With this poor balance, a pitcher's motion is rushed because momentum is not allowed to be properly gathered, culminating in increased asymmetrical stresses of the ankle and knee joints and increased load on the abductor and adductor muscles of hip in maintaining balance and pelvic movement. These can lead to timing issues that can greatly affect not only consistency of release point, but the health of the shoulder and elbow, due to the pitcher speeding up his arm in order to overcompensate for the asymmetries that began in his lower half.

Not surprisingly, Strasburg was quoted in the aforementioned Kilgore article as noticing improved balance (and momentum) with the moving of his pivot foot, leading to improved consistency of release point and his command. This minor mechanical overhaul should also lend itself to Strasburg maintaining a healthy arm, as it could be assumed that now he is less susceptible to timing misfires, which often lead to an increased risk of arm issues.

While this fix has worked wonders for the righthander, in the bigger picture, there is a question of why a mechanical hitch of this nature took so long to be noticed and fixed. While there is sadly too often an embracing of the 'if it ain't broke, don't fix it' approach to handling pitchers at the high school, college, and lower minor league levels, especially ones with the one-in-a-lifetime velocity and stuff like Strasburg, the fact that a flaw that is typically seen and eradicated early on in a pitcher's career was missed or blissfully ignored in Strasburg's case speaks to a much bigger issue, that of the ultimate cost of talent (read: velocity) in spite of mechanics that are not sustainable long term. Triple digit heat does not necessarily equate to flawless mechanics and given the forces generated when throwing this hard, the need to aggressively surveil the mechanical idiosyncrasies of pitchers like Strasburg is heightened. Thankfully for the Nationals and Strasburg, the fix was a simple one, yet one that should have been attended to long ago, highlighting the sometimes difficult balance between process and results when it comes to a pitcher's mechanics and their potential for injury.