Early Rookie of the Year predictions

In the last of a series on the end of season awards, I make my Rookie of the Year predictions.

Share All sharing options for: Early Rookie of the Year predictions

My last two posts discussed my choices for the MVP and Cy Young awards, and I fully understand the potential folly in making predictions 60-odd games through the season. This post discusses the Rookie of the Year (ROY), with one race being very intriguing and the other very . . . well, I'm not sure there is a race yet.

Since ROY voting includes both pitchers and position players, using standard baseball measures makes for a confusing table. Beginning with the American League, I've boiled it down to the essence: 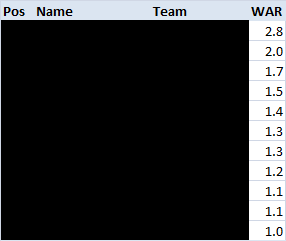 All data is from FanGraphs through games of Wednesday, June 11th. ROY voting is less dependent on team success, so the fact the players represent teams from the best to worst is irrelevant. Generally speaking, there appear to be two primary candidates, with a couple other players who could play their way into the discussion. My bold prediction for AL Rookie of the Year is: 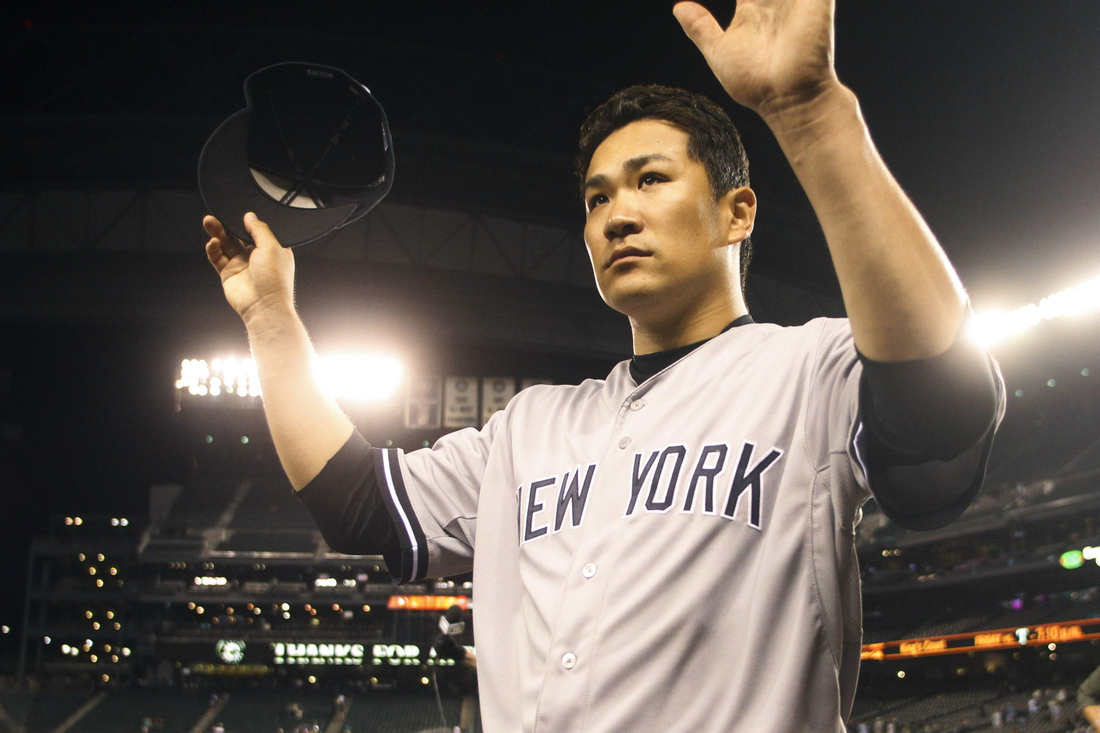 Didn't see that coming, did you -- told you it was bold. Here are the contenders (view the expanded values for position players and pitchers): 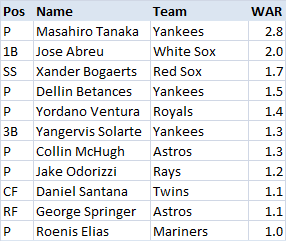 Absent drastic changes, it's going to be a two-man race, and it was almost foreordained given the splashy nature of their signings. Masahiro Tanaka was the subject of an intense bidding war that culminated in a seven-year, $155 million contract with the Yankees, and Jose Abreu was signed by the White Sox for six years and $68 million. There are other worthy candidates -- Xander Bogaerts has been everything the Red Sox hoped he would be when they traded Jose Iglesias at the 2013 trade deadline, and he's also not injured. George Springer could be the franchise player the Astros can build around as the young talent they've acquired over the past several years begins to reach the major leagues. Yordano Ventura is getting his first extended playing time with the Royals after two brief trials and is throwing near 100 mph. But the award will be Tanaka's to lose.

The story is well-known -- Tanaka was 99-35 with a 2.30 ERA in Japan, going 24-0 with a 1.27 ERA in 2013. The transition from Japan to the major leagues runs the gamut, from complete success by players like Ichiro Suzuki and Yu Darvish to busts like Tsuyoshi Nishioka and Kyuji Fujikawa -- even in an age in which scouting is worldwide, there are no guarantees. As of this writing, Tanaka leads the majors in xFIP, a stunning achievement for a rookie pitcher acclimating to a new team, country, and language. He has one loss -- to the Cubs. FanGraphs estimates he's delivered around $15.3 million in value, so if he can maintain his production it will be around $40 million (based on 34 starts).

Jose Abreu is having an equally electric start. I received this tweet Wednesday evening:

@ScottLindholm I keep hearing worries about Abreu's OBP. Any idea who the last rookie to slug +.600 for a season?

Brandon certainly doesn't ask much of rookie players, only that they slug .600 or better. It's a short list:

He's among the leaders in most home runs to begin a career, and accomplished this despite missing 14 games to injury. He'll be a key component as the White Sox add young talent around him, but the real question is, which player will be around for the long haul? I'll answer using two different metrics -- Tanaka's xFIP and Abreu's Brooks Baseball Zone Profile Chart for batting average.

In Tanaka's case, his xFIP is the best in baseball as mentioned previously. So what? To quote the glossary definition at FanGraphs:

Along with FIP, xFIP is one of the best metrics at predicting a pitcher’s future performance.

The xFIP components of strikeouts, walks, and home runs have fewer fluctuations over time -- strikeout pitchers usually remain strikeout pitchers and so on. While a pitcher's win-loss record can vacillate wildly due to factors beyond his control, his xFIP will likely show less variability, absent changes due to switching teams, injury or other factors. Given this, Tanaka can be expected to put up similar numbers, and at 25 he's just entering his prime. 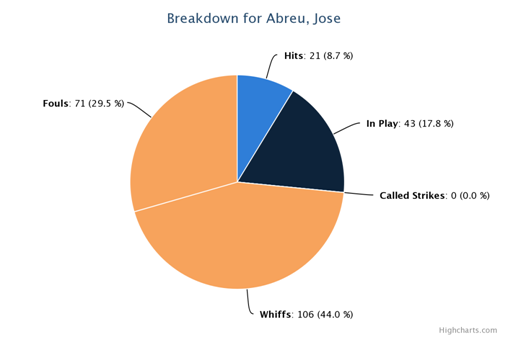 He swings at a lot of pitches outside the strike zone and rarely has positive outcomes when doing so. It will be very interesting to see the adjustments both pitchers and Abreu will make in recognition of this.

With regard to the National League, I read the rules carefully, and they state the Rookie of the Year must be awarded even if no one deserves it. I'm not even going to try to create an aura of suspense -- these are the candidates: 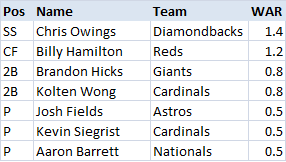 I tried to find any reason to be excited by any of these players and came up short. Here are the FanGraphs breakdowns of the WAR components for each player:

Looking at their traditional stats, none are hitting particularly well, and while Billy Hamilton has raised his average, an OBP below .300 doesn't cut it for a leadoff hitter. All these players are fielding their positions well, which will do little to set a ROY voter's heart aflutter. None of the pitchers have done anything special, leading me to make this choice for the NL Rookie of the Year:

At this time last year I predicted Evan Gattis and Jose Iglesias as the Rookies of the Year, with the proviso that if Yasiel Puig continued his hot start I'd change my pick to him. At that time Jose Fernandez was around a .500 pitcher and Wil Myers hadn't made his big league debut, so it's totally possible someone will rise up in the National League, not like Puig or Fernandez did, but certainly more than Chris Owings or Billy Hamilton.

All data from FanGraphs, Baseball-Reference and Brooks Baseball.