Share All sharing options for: The Koufaxian Wes Ferrell

One of the all-time greatest peak-heavy players was Sandy Koufax. Through wWAR, Koufax was able to turn his borderline career WAR total (which slots him in with Frank Tanana, Bret Saberhagen, and Billy Pierce, among others) into a Hall-worthy wWAR total (on par with Don Drysdale, Carl Hubbell, and Jim Palmer).

I felt it did the trick.

One starting pitcher that finished about seven wWAR off the Hall of wWAR pace was Wes Ferrell. He's the guy I want to talk about today. First, let's compare the pitching careers of Mr. Ferrell and Sandy Koufax: 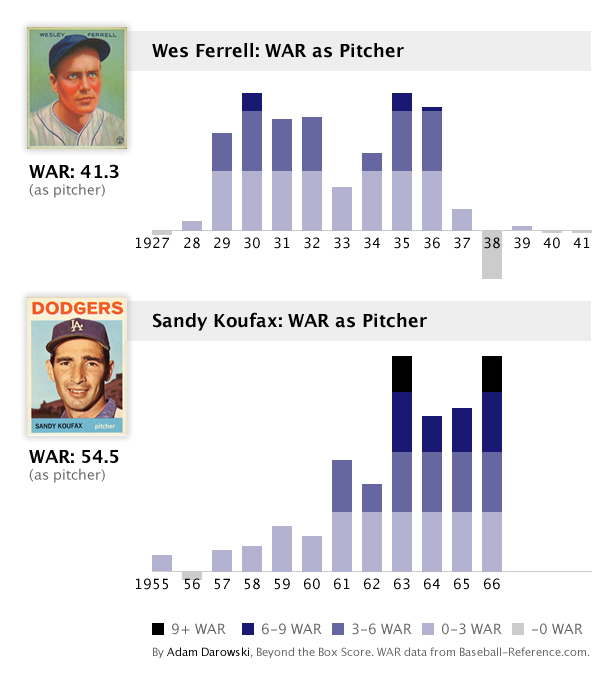 Both had sharp, pronounced peaks. Koufax's was shorter (although not by much—Ferrell dipped in the middle of his), but much more dominant.

As soon as the first version of wWAR went live, I began thinking of ways to make it better (with the help of readers). One modification that immediately made sense was including pitchers' batting value. Hurlers like Red Ruffing and Walter Johnson were quite valuable at the plate. Howver, that first version of wWAR didn't give them credit for it.

Look what this adjustment did to Koufax—and see what it did for our forgotten friend Wesley: 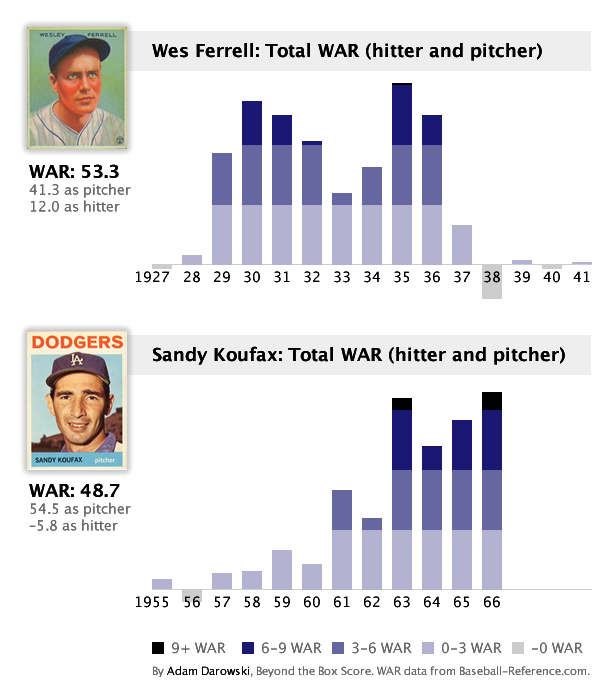 This modification to wWAR brought Ferrell from considerably short of the Hall of wWAR to being the second-best 20th century pitcher outside of the Hall of Fame (behind Kevin Brown). That's a huge jump. Ferrell's peaks are now a bit higher than before while Koufax's are a bit lower. The fact that Ferrell's peak was longer seems to be evening things out a bit.

Indeed, it did even out. Here they are sorted by nth best year: 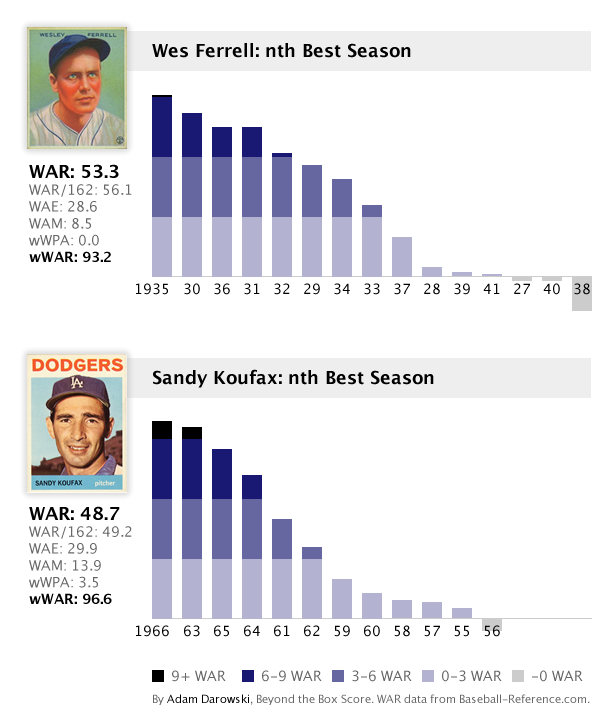 Koufax's peak is still higher, but only for the first three years. Ferrell's peak lasts longer, too (eight 3+ WAR seasons to Koufax's six).

Of course, what really helps Ferrell out in all of this is the fact that he could rake. He was a career .280/.351/.446 hitter, but because he played in the crazy 1930s that only gave him a 100 OPS+. Still, think about it—when you're talking about a pitcher's batting WAR, the replacement level is very low. Ferrell was providing league average offense from a position where teams usually get a guy hitting an empty buck twenty. Ferrell hit 38 home runs in 1345 PAs. He was more like a #7 hitter. That's how he was able to add another dozen wins to his career value.

It turns out that Ferrell is also a very underrated pitcher. The era adjustment that cuts Ferrell's OPS+ down to 100 is also the same one that boosts his ERA+ to 117, despite a career ERA of 4.04. In fact, Ferrell's ERA+ is better than Andy Pettitte's 3.88 (and Pettitte pitched in the steroid era).

I know why Wes Ferrell is not in the Hall of Fame. His ERA was too high and he didn't have enough wins (193). After looking at these graphs, it seems to me that if we're going to look at wins, we should be comparing Ferrell to someone like Koufax or Dizzy Dean (the "peaky" types) rather than the more traditional compilers. Koufax won 165 games, 65.5% of his decisions. Ferrell won 193 games (60.1%). Koufax won 20 games three times. Ferrell did it six times. In fact, no 20th century pitcher won 20 games more often without being inducted into the Hall of Fame.

Sandy Koufax has always been one of my favorite pitchers (it came from my childhood devotion to Nolan Ryan). But as a kid, I didn't understand park adjustments and era adjustments. Koufax pitched in some pretty favorable environments. Wes Ferrell faced the exact opposite. At his highest peak, Sandy Koufax certainly was the better pitcher over Ferrell. But Ferrell lasted longer and also happened to be one of the greatest hitting pitchers in history. This has to come pretty close to evening things out. If you ask wWAR, it does even it out. But Koufax gets one more boost from his postseason performance (while Ferrell didn't pitch in the postseason—perhaps further explaining why he is underrated).

In 1972, Koufax coasted into the Hall of Fame on the first ballot, receiving votes from 86.9% of the Writers. The best showing Ferrell had was 3.6% in 1956. It seems to me that the difference between the two was not nearly that large.