Share All sharing options for: Adjusting the Hall of wWAR: Pitchers' Batting Value 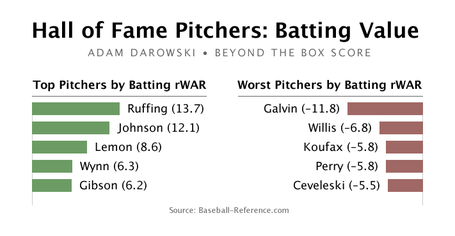 It's been a couple of weeks since the Hall of wWAR was announced and it's become pretty clear to me that the initial "induction" may have been a first draft. There have been a number of suggestions to and (constructive) criticisms of the methodology, both on this site and elsewhere.

First, the same morning that I introduced the Hall of wWAR (talk about timing!), Viva El Birdos published a post criticizing wWAR itself, most notably the somewhat arbitrary nature of the Wins Above Excellence and Wins Above MVP baselines (3.0 and 6.0 WAR, respectively). Of course, the only alternatives I've found are also arbitrary in nature, but I'm intrigued by the idea of the baselines adjusting on a year-by-year basis, depending on the overall league talent.

Some comments following a post at Baseball-Reference also questioned the need of the additional positional adjustment I made for first basemen and corner outfielders. My approach made for a more equal (but not exactly equal) Hall, based on positions. But perhaps a Hall of Fame (or wWAR) should feature more big boppers (Billy Williams and Ralph Kiner, for example) and fewer all around guys at premium positions (Dale Murphy would be the first casualty). I'm curious about your thoughts on the adjustment. (Catchers would still receive an adjustment. Otherwise, we'd have hardly any catchers.)

A couple good discussions happened here at Beyond the Box Score. First, there were players who lost out on the Hall of wWAR simply because of time lost to the war. Should I have accounted for this? If I do come up with a methodology for this, the Hall can welcome Enos Slaughter, Red Ruffing, and Phil Rizzuto (at least).

Another good discussion that happened here was pitchers' batting value (and this is the topic of today's graphic). Should it be factored in? My approach was that pitcher offense is a "nice to have" that can be lead to bonus points for a borderline pitcher. The Hall of wWAR didn't assign bonus points, so I left it out. Was I wrong?

These are the batters who would be most affected by this: 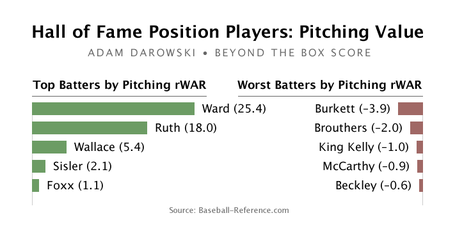 Ward is such a unique player that was the only Hall of wWAR inductee who didn't actually fit into the established criteria. Ruth, of course, didn't need help from his offensive numbers (though adding his pitching numbers would push him ahead of Barry Bonds again, by wWAR).

So, my question to you—is this a slippery slope you'd like to see me scale? I'm guessing that Red Ruffing (who loses value for his offense and lost time to the war) would vote yes.