Extreme infield shifts have become more common place in Major League Baseball over the last few seasons. What has been the impact on league-wide defensive efficiency and how many runs are teams saving by shifting?

Share All sharing options for: Estimating number of runs saved by infield shifts

Imagine for a moment that the Blue Jays are playing the Red Sox. It's the bottom of the third inning and David Ortiz digs into the batter's box to lead off the inning. Before a pitch is thrown, Brett Lawrie vacates his position at third base and trots out (more likely sprints like a madman) to assume a defensive position in shallow right field. On the third pitch of the at-bat, Ortiz rips a line drive that seems destined for a hit. Not this time. Lawrie makes a routine catch on the liner and the Red Sox inning starts with an out, rather than a runner on first. Over the last few years, we have seen more and more infield shifting like what was just described. Teams are using batted ball data to more appropriately align their defenders to take advantage of batter tendencies. What was once a hit, even just a few years ago, is now frequently an out. But how many runs are these extreme infield shifts saving?

We can get a broad sense for the impact of infield shifting and alignment of defenders by examining league-wide defensive efficiency over the last few seasons. Recall that defensive efficiency is the rate at which balls in play are converted into outs. While this metric does not necessarily capture the nuance of defense, it can be used to roughly assess a team's defense.

Here are league-wide defensive efficiency data from the last 8 seasons: 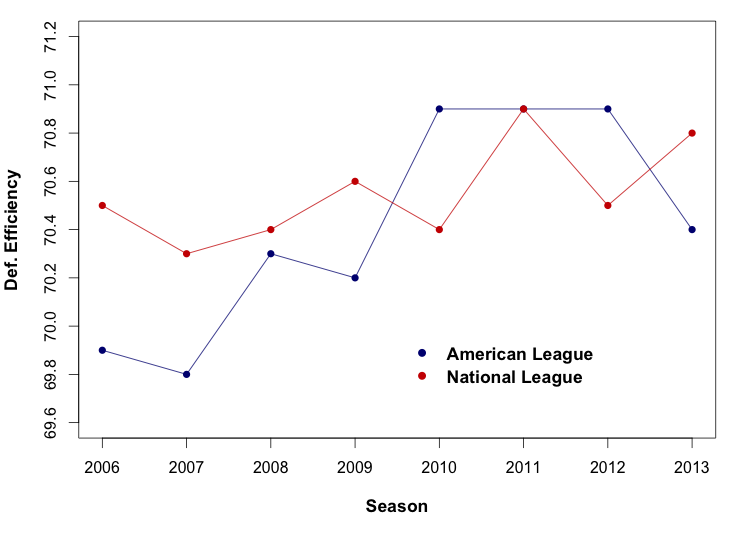 There is a clear trend within both leagues for increased defensive efficiency. You might look at this figure and think that the increase is not very large; at its largest, it is 1.1% (2007-2012 in AL). But consider that last season there were roughly 127,000 balls in play. So turning an extra 1% of these into outs means ~1270 fewer baserunners. That is a considerable effect. This change in defensive efficiency is a result of a number of factors, but one that should be considered is the advancement in defensive positioning.

Last week, Jeff Zimmerman at the Hardball Times released infield shift data for 2013. These data considered a shift to be on when the defense had three players on the same side of the infield (as in the Jays-Red Sox example above). The data that were made available included how often teams had a shift on when hitters put the ball in play, and the players that hit into the most shifts. Here, I am focusing on the former. Keep in mind that these data exclude home runs, strikeouts, walks (because those plate appearances do not end with a ball in play). Using these data, we can estimate the number of runs a team saved (or gave up) as a result of using the extreme infield shift.

Shifting a lot is one thing, but shifting effectively (i.e., making outs) is also critical. A team's advantage (or disadvantage) with shifting can be taken as the difference in BABIP between shifting and not shifting. Essentially, if a team had not shifted, we would expect their opponents to produce the BABIP observed for balls in play without the shift. Multiplying the BABIP difference score by the total times the team had the shift on provides the number of hits a team saved (or gave up) by shifting. Here are those data for the five frequent shifting teams:

As seen, the Rays shifted a lot, and were evidently successful in doing so, thus saving many more hits than the other frequent shifting teams. This information is then used to estimate the number of runs saved by shifting. This involves a number of steps. First, each team's batting event rates from the 2013 season are determined; basically, of the non-HR hits a team gave up, how often were they singles, doubles, or triples? Home runs are not considered because we are working with balls in play. These rates are then used to determine how many of the hits saved (or given up) were likely to have been a single, double, or triple. For example, the Rays' opponents non-HR hits were singles 75.56% of the time, doubles 21.86% of the time, and triples 2.58% of the time. So of the roughly 19 hits they saved by shifting, we would expect 14 to be singles, 4 to be doubles and 1 to be a triple. Finally, we can multiply these batting events by their run values (I used the values given in Table 4 of The Book) and sum the run values to get an estimate of the runs a team saved (or gave up) by shifting.

Here are the results: 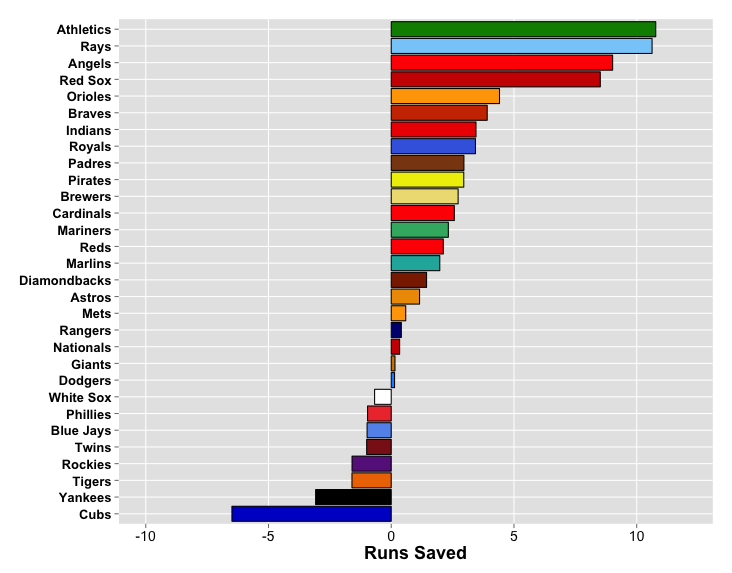 As is evident, most teams (22 out of 30) found an advantage with the shift. The top four teams each saved 8-10 runs (roughly 1 win's worth) by shifting; a remarkable advantage. These top teams being atop the leaderboard is unsurprising, as they are typically thought of as leaders in using analytics to inform on-field strategy and player assessment.

There are a few standout results. First, the Cubs shifted quite frequently (348 times when the ball was put in play, 7th most in baseball), but apparently, to their detriment. By my calculations, they allowed opponents 6.49 extra runs as a result of their shifting. Cubs' opponents' BABIP was 0.313 when the Cubs shifted and 0.280 without the shift. Perhaps the Cubs need to revisit the ways in which they are implementing the shift. The Astros present another interesting result. They had a shift on for 412 balls in play, but only saved 1.15 runs from doing so. Astros' opponents' BABIP was 0.308 when the Astros shifted and 0.313 without the shift. So their shift did not have a dramatic effect. This provides insight into the fact that simply implementing the shift is not enough. It must be done effectively, with players that are capable of making it work; this latter component may have been lacking for the Astros last season.

There are sample size issues to consider. Ten teams had a shift on for a ball in play fewer than 150 times: the Tigers, Giants, Marlins, Rockies, Braves, Padres, White Sox, Cardinals, Twins, Dodgers, Phillies, and Nationals. Reflecting on the team philosophy and managers of these teams makes their presence at the bottom of the list unsurprising. The small sample of shift plays has an impact on the extent to which the observed opponents' BABIP result when the shift was on is reliable. In turn, the computed difference between shift and no shift situations may not be representative of the true impact of implementing the shift for these teams. The low number of shifts for these teams is also reflected in that the number of runs they could have saved is limited.

The runs saved values that are given here are also not representative of the other forms of defensive shifting in which some of these teams engage. As noted, these data are only representative of situations when a team has three fielders on one side of the infield, so they represent a sort of extreme shift. Shading an opposing batter one way or the other without crossing the midline of the diamond is not accounted for here, but likely contributes to the improved defensive efficiency noted at the outset.

It will be interesting to see how some of the teams that were reluctant to shift in 2013 play things in 2014. For example, Brad Ausmus, the new manager of the Tigers has indicated that he will implement shifts this year; something the team did not do much of under Jim Leyland. With the new wave of fielding data almost upon us, patterns of shifting and an understanding of the players who excel at it will continue to advance.

All statistics courtesy of FanGraphs and Baseball Prospectus.

Chris Teeter is a Contributor to Beyond the Box Score. You can follow him on Twitter at @c_mcgeets.