Is HBP/PA a repeatable skill for teams or players?

Even after the renewed enforcement of body armor rules, baseball is still in a golden age of hit by pitches.

Share All sharing options for: Is HBP/PA a repeatable skill for teams or players?

Once upon a time, hit by pitches (HBP) were even more commonplace in Major League Baseball than they are now. But that was a long time ago, before the American League even existed. From 1887 through 1900, the last year before the American League, National League hitters got HBPs in 1.05% of their plate appearances (peaking at 1.24% in 1899). That's equivalent to 10 points of OBP. But those levels didn't last long after the AL joined in on the fun, and indeed, it took exactly one hundred years before baseball beat the 1% threshold again in 2001.

The New Golden Age of HBP

As shown in the graph below, there was a steady decrease in HBP per PA until a low point in the 30s and 40s. In just twenty years between 1981 and 2001, the HBP/PA rate climbed from 0.43% to an epic high of 1.01%. It was these incredible rates around 2000 that led MLB to crack down on body armor, first in 2001 with a rule against pads longer than 10 inches, and then in 2002 with a new "emphasis" on enforcing that rule. As of now, medical exemptions could allow greater armor. But as this graph shows, a slight decrease in HBP/PA from that 2001 peak to around 0.8% in the last five years still puts current rates in select company, historically. 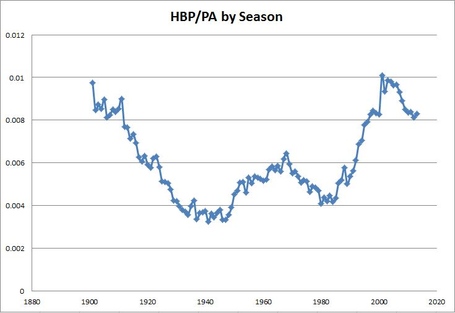 It's unlikely for this sharp increase in HBP rates over the last fifteen years or so to be an accident, or for it to be due to pitcher wildness. Much more likely, hitters are making a conscious effort to get hit, or at least to not get out of the way. There is an obvious financial incentive for hitters to get better stats, and since OBP sharply rose in prestige around the 2001 peak, there seems to be a match. Still, "trying" for a better OBP might also show up in BB% (or BB/PA here, for the sake of consistency). 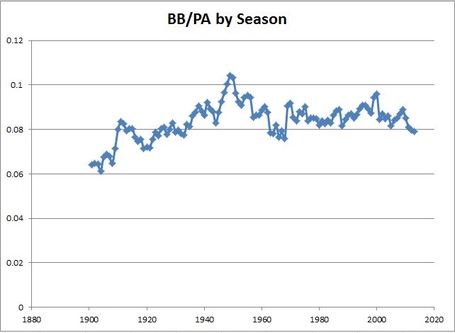 Unlike HBP/PA, BB/PA has stayed remarkably consistent. But we're also comparing apples to oranges here, in two important ways. First, there are obviously many, many more walks than there are HBP (roughly 10 times more), so there's less room for variation for BB/PA. Still, that would be more of an explanation for year to year variation -- and we have a strong sample of HBP that shows some pretty consistent trends. BB/PA has most likely been more consistent for a second reason -- you can't really try for walks.

Well, of course you can try for walks. But if a league's worth of hitters do that, pitching strategy will be affected. If hitters are swinging less outside the zone overall, we can expect pitchers to throw fewer pitches outside the zone, overall. That cat-and-mouse competition is probably the primary reason for the consistent walk rates we see.

If getting on base and avoiding outs is the name of the game, then HBP are good things. In fact, the run value of a HBP is very similar to that of a walk (that seems fairly intuitive). If we can expect the average HBP to be worth 0.35 runs, then despite their rarity, HBP could have a noticeable effect on a team's season (especially if a high HBP count can be deliberate).

One wonders, then, if the league-leading HBP total of the Pittsburgh Pirates helped them win some ball games. The Pirates' 88 HBP mark was 12 higher than the second-ranked Reds, and 37 HBP above the league average (51). We can expect that about 13 extra runs were scored by the Pirates in 2013 due to their HBP advantage over league average -- more than a win. A full win seems like the very definition of "significant."

But bulk totals don't tell the whole story, because if the Pirates' high HBP count was deliberate, we can expect that to show up better on a rate basis. And despite the club's end of season record, the club's PA total (6135) was slightly below average (6162). The Reds and Red Sox trailed the Pirates in HBP, but the distance between the clubs is a little more stark in HBP/PA:

I have no idea if the Pirates' high HBP/PA was deliberate, or if it was complete chance -- there seems to be little consistency in team HBP totals year to year (the Pirates, Reds and Red Sox all came in around league average in 2012). And in most of the last several years, there appears to be an outlier like the 2013 Pirates (in 2012, the Brewers posted 90 HBP and a 0.0145 HBP/PA rate).

It may be that team HBP/PA is largely (or almost completely) luck -- but that is not the case with player HBP/PA. Thanks to Steve Staude's hitting stat correlation tool, which uses data from 2007 to 2013, I can report that there has been a significant year-to-year correlation for HBP/PA for hitters with a minimum of 300 PA: 0.622 (n=1222, 95% confidence). That's not as strong a correlation as BB% (0.746), but it's not that far off, either.

It seems that player HBP/PA can be partly the result of effort. In the last 20 years, there were 35 occasions in which a single player had a higher HBP total than the rest of his league (excluding 5 ties). Of those 35 "HBP titles," 25 were won by a player who has led his league more than once. Three players took home the HBP prize at least three times, including Craig Biggio, who led the NL five times (almost 23 points of Biggio's career .363 OBP come from HBP).

Shin-Soo Choo, last year's MLB leader in HBP, presents a very interesting case. Choo was no stranger to HBP before -- he had three previous seasons of 11 or more, and he missed the AL's top mark by one in 2009 with 17. But one wonders if Choo had a little extra incentive to get hit in his walk year. Although Choo has average or better power and is no slouch on the base paths, he hit the market as an OBP machine. In line for a $100M+ contract, it seems like Choo had every incentive to beef up his OBP with a handful of extra HBP.

Choo's value at the top of the order

Did Texas overpay for Choo to make a scary lineup?

Choo's value at the top of the order Did Texas overpay for Choo to make a scary lineup?

That may be what happened. On the back of 26 HBP, Choo came in fourth in the majors with a .423 OBP. Choo's 26 total is one HBP per season week (well, half a year's worth, anyway), making his HBP rate a little reminiscent of the old "one dying quail a week" rule. But because of Choo's high PA total (and the fact that we're talking about PA, not AB), Choo's HBP wasn't 50 points of his OBP -- it was "only" 37. Take those points away, and Choo would be left with a .386 OBP, making him not fourth overall, but fourteenth -- just ahead of OBP superstar Daniel Nava.

Of course, making zero HBP the baseline for Choo is unfair. Non-pitchers had a 0.0085 HBP/PA rate last season, and if Choo had that rate, he'd have had about 6 HBP last season. But we can't even just turn those 20 missing HBP into outs -- Choo might have gotten on base some of those times (let's say 8 of 20). The lost 12 times on base would only account for 17 points of OBP. And dropping Choo from a .423 OBP all the way to a .406 OBP would drop Choo's OBP rank from fourth all the way to... fourth.

In Choo's case, a .423 OBP definitely looked more gaudy than the .406 he might have sported with a league-average HBP/PA. The difference was not enough to change his status as an elite OBP machine, but it was still significant enough, in my view, to raise the question of whether or not he fell into a few extra pitches on purpose in 2013. We'll see what the future holds, as there is less reason to endure the pain of a 95 mph fastball when there's no pot of gold at the end of the rainbow.

All statistics courtesy of Baseball-Reference and FanGraphs.