MLB Payrolls and the Cost of a Win

An in-depth analysis of how teams are spending their money and the returns they should expect going into 2014.

Share All sharing options for: MLB Payrolls and the Cost of a Win

With the offseason wrapping up and Spring Training well underway, we have a general idea of what team rosters are going to look like in 2014. A couple of weeks ago, Wendy Thurm took a crack at projecting Opening Day payrolls and followed up with some fantastic analysis here and here. In this article, I'm going to expand on these payroll allocations and further dissect how teams are spending their money.

Thurm divided each team's payrolls by their starting pitchers, relievers, starting lineups, and benches. In my analysis, I'm combining starting and relief pitching into one category, doing the same with lineups and bench players. It is worth noting that the percentages for each positional category do not add up to 100 percent, as she explained in her pieces. For example, the Angels' payroll allocations add up to roughly 87 percent. I'm assuming that this is due, at least in part, to the albatross known as Vernon Wells. Baseball Reference notes that $18.6 million of his contract is to be paid by the Angels in 2014.

As you can see, the Phillies are not getting much bang for their buck. The Yankees and Dodgers are, unsurprisingly, right at the top as they pay roughly $5 million per win. At the bottom are the Marlins and their league-low $42.5 million payroll, as they generate the most WAR per dollar. The Astros situation would look a lot different without the likes of Scott Feldman and his $12 million figure for 2014; they also have some minor league talent just itching to play for the league minimum, which could also drive that cost per WAR down. Finally, I doubt that anyone is surprised to see the saber-friendly Indians, Athletics, Pirates, and Rays populate the bottom chunk of the list. Here is a more visual approach to the numbers. 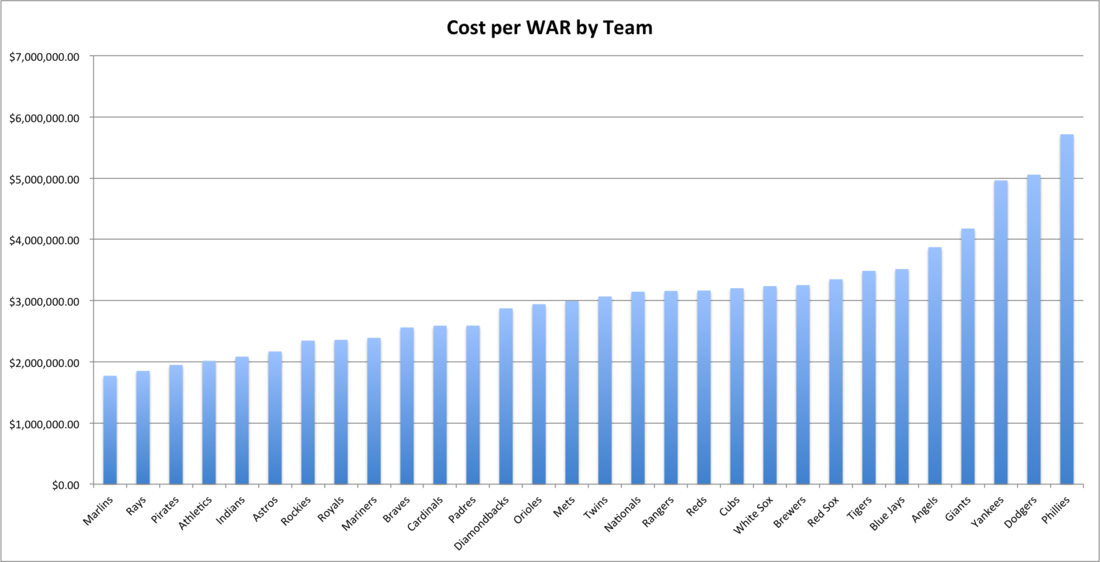 Next, by using Ms. Thurm's positional allocations (starter, reliever, lineup, bench), I determined how much money is going into each team's pitching staff compared to their batters. Then, I divided the totals from both pitchers and batters by their projected Wins. Again, the numbers are not completely accurate as the percentages do not add up to an exact 100 percent.

The Phillies are paying over $7.2 million per projected pitching WAR! They spend almost 60 percent of their payroll on pitching, which is the largest allocation of any team by over five percent. Meanwhile, the Marlins' cost of a pitching win is just over $1 million. Thanks, Jose Fernandez. Furthermore, the Braves allocate just 24.8 percent of their payroll to pitching. On the hitting side of things, the Cubs spend just 26.7 percent of their payroll on batters, while the Indians spend 72.2 percent. The Yankees spend over $6 million per projected batter win, while no other team spends more than $5 million. The Astros spend most effectively according to cost per batter win, at just over $1.1 million. Interestingly, that is roughly a third of how much they spend per projected pitching WAR. It's pretty amazing how much Scott Feldman and a few relievers have changed their payroll allocation; surely things will balance out when they get through their drastic rebuilding stage. Here is another visual: 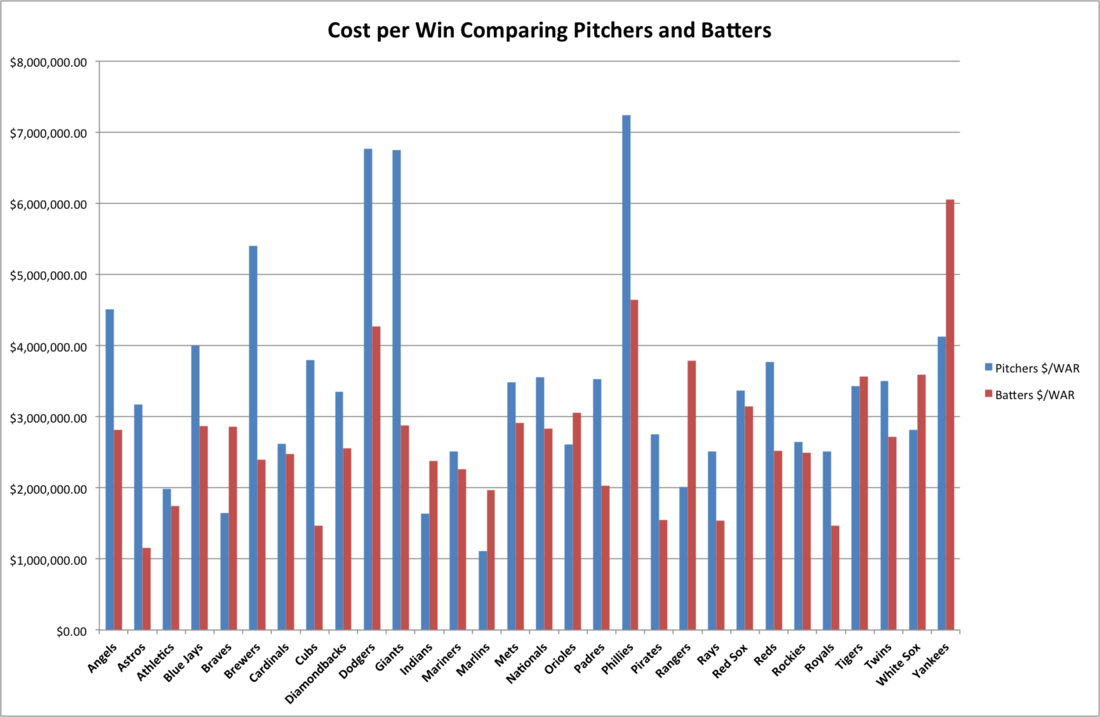 Finally, according to these numbers, the average cost per projected pitcher WAR is roughly $3.44 million, while a projected hitter WAR costs about $2.73 million. Overall, the cost of a WAR equates to just over $3 million per. This makes some intuitive sense, as clearly the cost of a win in baseball is not going to be anywhere near the cost of a free agent win, which Lewie Pollis claimed cost over $7 million per this past year. About five years ago, Cameron wrote that the cost of a win in baseball (not just free agents) was $2.31 million in 2008. Thus, the cost of a win across the league has increased by about 30 percent since 2008. More importantly, I found that a pitcher projected WAR costs about $700,000 more than a hitter WAR. There are a few explanations; for example, it could be that reliever WAR totals are suppressed (I am currently digging into this a bit more -- this could be a false claim). A positional breakdown of the cost per WAR would be a solid next step to this research.

Oh, and in case you were curious, Mike Trout is projected by FanGraphs' depth charts to produce 8.1 WAR while making a cool $1 million. The Angels are paying Vernon Wells, Josh Hamilton, and Albert Pujols nearly $60 million to produce 5.3 WAR for the team -- just let that marinate for a while. The Angels would be wise to reel Trout in on a long-term deal. Yes, I'm making Trout puns.

This article helps us further describe the spending of teams going into 2014. Shout-out to Wendy Thurm for her great work!

Bryan Robinson is a Contributor Beyond the Box Score. You can follow him on Twitter at @ProProjections.